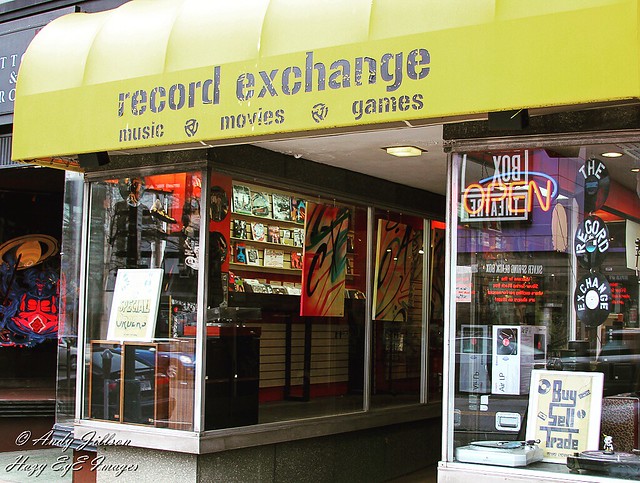 The Record Exchange has been a part of Silver Spring in one form or another for over 20 years. More than just a place to buy quality vinyl records, the store focuses on buying, selling, and trading multiple formats of music, movies, and video games.

I moved to Silver Spring, MD eight years ago next month, and I’ve been shopping at The Record Exchange since. I feel extremely fortunate to have The Record Exchange in downtown Silver Spring as my local record shop. It boasts friendly/knowledgeable staff, diverse selection of used vinyl, and affordable prices. I’ve been pulling what I call “boner-worthy” vinyl out of their records bins for eight years strong. The last picture at the bottom of this review is of used records I found at The Record Exchange over the past few months. Insanely good stuff — a few rare finds in the lot for sure — all vinyl itself in great condition.

Anyway, the store has recently undergone a revamping of sorts and there are new changes to announce. As of this past February, longtime employees Sheila Hunt and Brian France have joined retail forces and have taken over the store as the new owners. The two have worked in the business for several years and say they are “excited for not just the ability to keep the long known store running but also for the new possibilities, including heavier involvement with the community.”

The first big event under the store’s new ownership is quickly approaching; Record Store Day. RSD, started originally in Baltimore at Soundgarden, is Saturday, April 13. It’s a day devoted to celebrating small record stores such as The Record Exchange. It’s also a day in which brand new limited edition records are released to the public but can only be purchased at your local participating record store (hint, hint). On top of having a wide selection of those releases on RSD, The Record Exchange plans on keeping the fun going all day with live music, raffles, and other surprises. There will also be a large amount of highly sought-after used vinyl hitting the record bins as well. Yes!!!

What more I can I say, really? The Record Exchange has proven itself to be an above average record shop. I am a vinyl addict. I probably need rehab. I have dug through bins at just about every shop within a fifty mile radius of DC, MD, and VA. The Record Exchange ranks in my top three favorite used record shops in the area. And if you know me and/or know my vinyl habit that’s a serious statement. I have consistently found great used records there at decent prices. And they even have a listening station!

If you haven’t visited The Record Exchange in downtown Silver Spring before you need to get your ass over there! If you haven’t visited the shop in a while stop by and say hello to Sheila and Brian and buy yourself something amazing. Support small business owners and support your local record shop. They have much more than just music for sale. The Record Exchange has tons of CDs, DVDs, BluRays, video games, gaming systems, and they can place special orders for customers seeking harder to find items. They have some patches, stickers, posters, and t-shirts for sale too.

Record Exchange is located at 8642 Colesville Road Silver Spring, MD 20910. It’s on the same side of the street and just a couple doors down from the music venue, The Fillmore Silver Spring. For more information, visit the Facebook page for The Record Exchange.

Here are some pictures recently taken of The Record Exchange in Silver Spring, MD. All images copyright and courtesy of Andy Jillson.