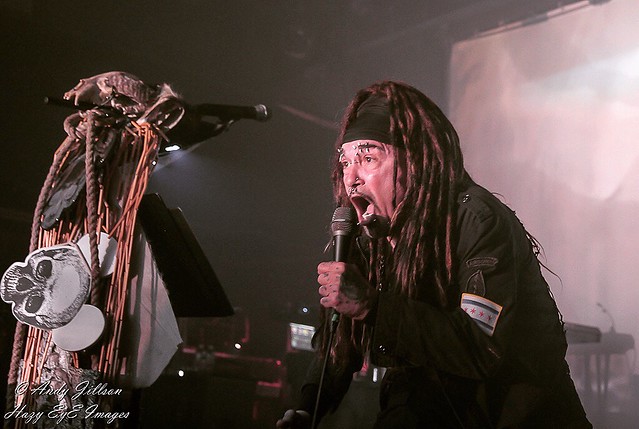 Ministry performs at the Music Hall of Williamsburg on April 15, 2019. (Photo by Andy Jillson)

Following a screening of the film, a brief Q&A, and a stunning performance by Cold Cave, Ministry took the stage and leveled the crowd at the Music Hall of Williamsburg on April 15. The band’s live performance of these life-changing songs left myself and most other fans there in complete awe — craving for more like depraved junkies in a William S. Burroughs novel. The set was seemingly short, but the performance and crowd interaction was definitely powerful and brimming with a mixture of goth apathy/pessimism and a sort of “turn on, tune in, and drop out” peace and love vibe that ironically lent itself to a genuine feeling of *optimism*.

Ministry, along with some help from long-time collaborator and Scottish-born cohort Chris Connelly, played a hypnotic ear-piercing Wax Trax! Records era set of classic Ministry songs (and a couple of other Al Jourgensen deep cuts from the Wax Trax! Records vault).

As I had mentioned in my preview for this show, I waited a long 29 years for these rock pioneers (and childhood musical saviors) to play a set like the one they so graciously played at the Music Hall of Williamsburg. The sad, confused, angry and angst-ridden teenager inside me had a cathartic spiritual awakening upon hearing the opening songs of the show. And by the time the show was over, I was exhausted, I was drenched in therapeutic sweat, and I had a killer buzz for the rest of the night and into the next day. Fuck yeah!!! I was the one losing their shit in the crowd this time!

There were moments during the first three songs I completely spaced-out and lost myself in the music; forgetting that I was also there to take photos and not just freak out to my favorite hardcore psychedelic rock music — pure white hot antifascist industrial metal music with a healthy dose of punk rock attitude and a disturbing slant on psychedelia. Yep. Your ol’ Uncle Al took to the stage all smiles, drink in hand and “vape stick” in hand as Jourgensen called it. Ministry played a fun, energetic, and heartfelt set as if performing for friends and family at a holiday party, which is basically what this event was.

Stream The Land of Rape and Honey by Ministry on Spotify:

The first three songs of Ministry’s performance were “The Missing,” “Deity,” and “Stigmata.” Those are some fucking amazing songs. All classic Ministry songs off The Land of Rape and Honey. I felt as if I had been gut-punched and hit upside of my head with a baseball bat. The songs were fast, loud, and extremely aggressive. The venue was hot, smokey, and dimly lit. Though I could barely move for the entire show, I was still able to take some shots of the band and rock out at the same time. I was in ecstasy. Growing up in the middle of that cornfield in northwest Indiana, I never dreamed I would actually be doing what I’ve been doing. Pretty fucking amazing, really.

Anyway, I don’t want to give too much away, but there was also a performance of a classic Wax Trax-era Revolting Cocks song and a Wax Trax-era 1000 Homo DJs song. There may or not be an acoustic performance of a certain mid ’80s song about “snakes and lizards and other things” as well. Who really knows what they could play in a city near you?!?

Here are some photos of Ministry performing at the Music Hall of Williamsburg in Brooklyn on April 15, 2019. All images are copyright and courtesy of Andy Jillson.