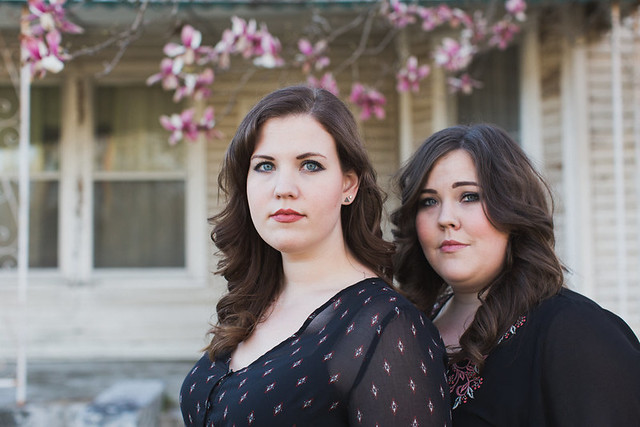 I can’t think of a much better venue for folk music than The Barns at Wolf Trap. When you enter the 18th century structures, which were relocated from upstate New York, you are transported to a place that is much mental as it physical or geographical. And The Secret Sisters are perhaps the most fitting band to play there, as they did recently.

At The Barns, you can get lost in every unique beam and the gentle smell of old, strong wood. And yet The Barns also match the progressive spirit of Americana, with modern, state-of-the art sound systems and technology. The artists who come to The Barns have deep connections to America’s musical traditions, while also exploring and pushing forward their genres.

This description fits The Secret Sisters to a “T.” Musically, they evoke the country-folk traditions of the Deep South. Lydia Rogers, the younger sister, plays acoustic guitar, and the vocals feature two-part harmonies between Lydia and older sister Laura. Fittingly, Johnny Cash played after their set, and their style of play reminded me of American Recordings, while their harmonizing is like a sisterly version of the Everly Brothers. Within these musical traditions, The Secret Sisters write from an unmistakably feminist perspective, and they write about sensitive, difficult issues.

Laura welcomed the crowd by saying “We keep hearing about The Barns.” Friday night marked the duo’s first appearance at the venue, and they thanked the crowd “for making us feel welcome by selling it out.” Laura told the crowd that Saturday morning the sisters would fly back to Alabama to take time off between their third and their upcoming fourth album cycle. She also said that the evening’s set contained no happy songs.

Laura sang a capella gospel to open the set on “Tennessee River Runs Low,” and Lydia joined in on her guitar and harmony vocals. After the song, Laura started worked her comedy schtick, saying “Barns in Alabama don’t smell like this. They smell like animal poop.” Lydia seem exasperated, although surely she is used to older sister’s antics. Laura then went on a roll about the duo’s love of homicide and murder ballads, and she told the audience about how their latest murder ballad is a sequel to their first ballad. She told the audience not to get connected to any of the characters, because everyone kicks the bucket, setting up “Mississippi.”

After “Mississippi,” the Sisters talked about their friendship and working relationship relationship with Brandi Carlile, who produced their third album and will produce their upcoming fourth. Laura played it for laughs, depicting herself as a sort of a stalker, joking she that sniffed Brandi and the she is the “best smelling human.”

The Sisters played “Black and Blue,” and then mentioned that they almost gave up music after after their second album. They were sued and had to declare bankruptcy at the ages of 28 and 26, and they were dropped by their label. To fund their third album, they turned to Pledgemusic, raising 50 percent of their goal in 48 hours, with nearly 1,500 donating. The third album, You Don’t Own Me Anymore, proved to be a huge success, garnering a Grammy Award Nomination for Best Folk Album. At their darkest time, they wrote “To All the Girls Who Cry.” The Sisters said that story shows that persistence pays off, even in the face of desperate circumstances.

Stream You Don’t Own Me Anymore by The Secret Sisters on Spotify:

Laura told the audience that next song will appear on the forthcoming album, but that they don’t know when that album will come out. While they’ve been to Seattle for some initial sessions, first Laura then Lydia got pregnant. Although they’ve always cared about the world, Laura said that having children on the way has made the two of them especially sensitive to their world. The new song, “Cabin,” tackled assault and issues of women being listened to and taken seriously.

During AmericanaFests, the Sisters had the once-in-a-lifetime opportunity to perform at a tribute to Graham Nash. They were surprised to learn that they would be singing with, rather to, Graham. Laura made clear that she found Graham extremely attractive, a silver fox. “In my dreams,” she said, “this would be Graham’s baby.” Lydia pointed out that Graham dated Joanie Mitchell, to which Laura replied, “If I have to take Joanie Mitchell’s sloppy seconds, I’m fine with that that.” Laura dedicated the next song, a cover of “Wasted on the Way,” to “the baby daddy I wish I had.”

The next song, “Till It’s Over,” Laura said, was a simple country song, as though “we haven’t been playing country.” “Fair,” played solo by Lydia, tells the story of a childhood friend, going from her days of innocence to being dealt a bad hand and making some tough choices. The Sisters rounded out their set with “Bad Habit” and “Healer in the Sky,” before announcing that they were too damn pregnant to leave the stage and come back for an encore.

The audience gave the Sisters a standing ovation, and they introduced the first song of their encore. “He’s Fine” is a sort of revenge song, a swipe an ex-boyfriend who moved on to a relationship with someone else, a very personal song. They sent the audience home with the title cut of You Don’t Own Me Anymore, a sort of updated version of the ’60s hit “You Don’t Own Me.”

Considering how close The Secret Sisters came to giving up music, we’re very lucky to have them still performing for us. The Secret Sisters mine the traditions of their native South to provide a musical structural for strongly progressive progressive, feminist lyrics. Their music fit The Barns perfectly: traditional yet modern, and pushing toward the future.