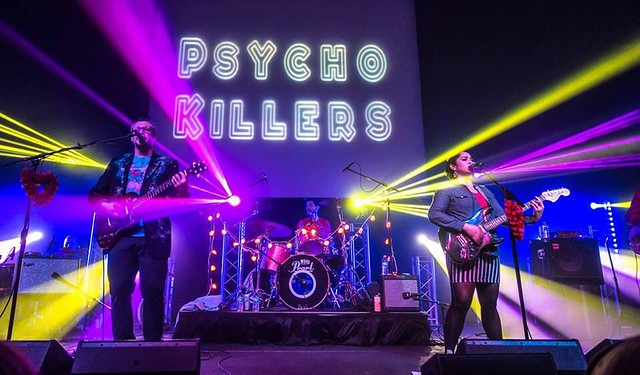 Psycho Killers, the area’s premier Talking Heads tribute, have been playing sold-out shows in the DC area for 10 years now, but this event on May 4th is special as they join their friends Synchronicity, a Police tribute act, and Jordan August Band, who will play a set of Paul Simon classics.

“We wanted to have some of our friends join us and take people back to a very special time,” said Ryan Porter, bassist for Psycho Killers. “’80s Music has an undeniable vibe, and all of these bands fit that to a tee.”

Watch the official music video for “Once in a Lifetime” by the Talking Heads to get into the mood for the show:

Dubbed Same As It Ever Was, the show will take place at The Bullpen, an outdoor venue next to Nationals Park that typically hosts tailgates before and after Nats games.

“They approached with the idea to host a show on a weekend night when there wasn’t a baseball game, and we thought it sounded like a chance to throw a great throwback party in one of favorite cities,” Ryan said.

If you haven’t seen Psycho Killers before, they are known for their high energy interpretations of the entire Talking Heads catalog. From the hits like “Once in a Lifetime” and “Burning Down The House” to more obscure cuts like “Uh Oh, Love Comes to Town” and “Memories Can’t Wait,” this is a show that isn’t to be missed by casual or diehard fans alike.