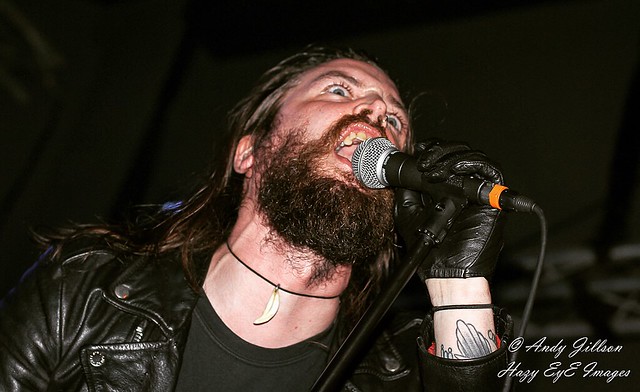 Skeletonwitch performs at Metro Gallery on May 5, 2019. (Photo by Andy Jillson)

Extreme metal masters Skeletonwitch pounded the crowd like a meat tenderizer, and proceeded to devour all radiant light at the Metro Gallery in Baltimore recently.

Using their punishing thrash metal sound and hypnotic rhythms to summons the audience toward the stage, Skeletonwitch played a blistering set of mostly new material at Metro Gallery on May 5.

The seemingly small but seriously possessed crowd swirled about — head-banging, punching the air, and howling along as Skeletonwitch proved why they’re tagged as extreme, thrash, death, and black metal. Whatever labels people want to put on them is fine by me. Call them what you like. They’re just a kick ass American hard rock band. Period.

In support of their 6th studio album, Devouring Radiant Light (released July 2018 by Prosthetic Records), Skeletonwitch have embarked on a brand new US tour. The “Louder Than Light” tour 2019 is a must see for all hard rock and metal fans. The bands Weigedood and Soft Kill open for Skeletonwitch on all dates of the tour. Martyrdod, Portrayal of Guilt, and Devil Master will open on select dates only.

The energy and vibes in the room completely changed once Skeletonwitch hit the stage. They wasted no time and ripped through an impressive set of songs off their newest record Devouring Radiant Light.

Having never seen Skeletonwitch perform live before, I was completely caught off guard and blown away. Their performance was intimate and charged with energy. Though their sound was new and abrasive to me, it’s also quite familiar and comforting. It sounded a bit ’70s and ’80s British heavy metal to me, mixed with a bit of trash metal and punk rock for good measure. They played like they were playing to tens of thousands of fans at a big arena rock show. Skeletonwitch are no slackers.

Although the venue was hot as hell, dimly lit, and writhing with sweaty male aggression; I loved the performance and will definitely be tracking Skeletonwitch and listening to their music more attentively.

Here are some photos of Skeletonwitch performing at the Metro Gallery in Baltimore, MD on May 5, 2019. All images copyright and courtesy of Andy Jillson.