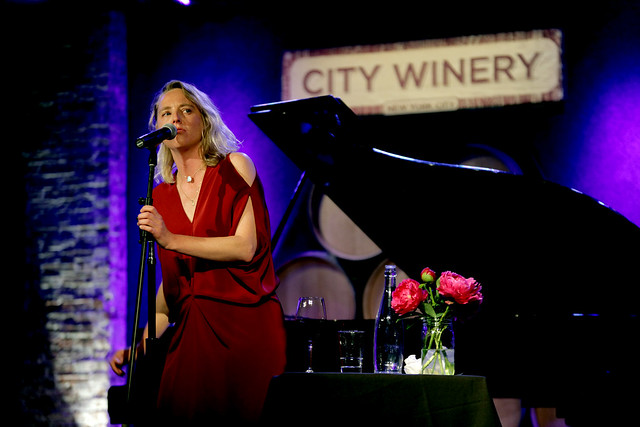 Lissie was born a rocker. Before she released her first album, To Catch a Tiger, she toured as the opening as the opening act for Lenny Kravitz. She caught fire early, landing songs on The O.C., Veronica Mars, and House, and that was before she’d even moved to Los Angeles. But as her career progressed, she’s moved toward increasingly bare, stripped-down arrangements. And that’s what she brought to City Winery DC recently.

A few years ago, Lissie held an unplugged concert in London’s historic (and beautiful) St. Pancras railway station, with just a piano to back up her mighty vocals. That concert inspired Lissie to make the album When I’m Alone: The Piano Retrospectives, featuring just her singing and a piano. Lissie’s tour to promote stopped at City Winery on May 6, and she was backed up on piano by Later Youth, who also opened the show with his own material.

“I don’t usually wear dresses,” Lissie said, but on Monday she wore a lovely red one. She also said that she prefers to perform barefoot. However, she appreciated that people eat dinner during the show at City Winery and didn’t want to see her feet during their meal.

Stream When I’m Alone: The Piano Retrospectives by Lissie on Spotify:

During a break in the her set, Lissie talked about her background. Born Elisabeth Corrin Maurus, she grew up in Rock Island, Illinois, one of the Quad Cities in northwestern Illinois and southeastern Iowa. When she was 10, she starred in Annie, performing in 80 shows. She taught herself the guitar in high school, and at 21 she moved to LA to pursue a music career. Introducing “Oh, Mississippi,” Lissie brought up recent record floods in Davenport, Iowa, another one of the Quad Cities.

A couple funny things happened during the concert. The already snort-inducing “Love Blows” had people, including Lissie, ready to break and laugh when a dish went CLANG! Before “Everywhere I Go,” she asked about getting some water, and an audience member handed her the bottle from their table.

Lissie told the audience the audience that she likes to cover “left-field” artists. When she was in high school, she said, she skipped school and drove around in her dad’s Dodge Dakota listening to the Dixie Chicks “Cowboy Take Me Away.” Later in the set, she covered Fleetwood Mac’s “Dreams.”

Lissie really showed off her pipes during the show. While singing “Castles,” she belted without the mic, letting her voice carry naturally. She took advantage of not having an instrument, moving freely around the stage, using her gestures and expressions to emphasize her vocals. Lissie closed her set with “Ojai,” which she wrote when she left LA to move back to the Midwest.

Whether its with a laugh or tears, Lissie is sure to move you next time she’s in town. Check out this incredibly versatile artist on tour.