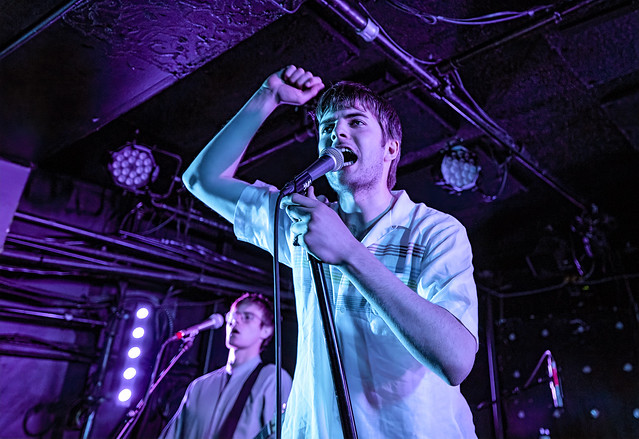 Fontaines D.C., the Dublin-based (the D.C. in the name reflects Dublin City) band melds poetry and punk — a sense of immediacy with hooks that are hard to shake. Grian Chatten, frontman of the group, sang/spoke in what can feel like a conversation and a call to arms in the same breath at the Rock and Roll Hotel recently.

On May 11, Grain spoke in a kind of sermon that invokes Irish writers of the past (some literally — James Joyce — and some in spirit — TS Eliot).

Having just released their debut full-length, Dongrel, last month, Fontaines D.C. embarked on a huge tour with fellow labelmates, IDLES, and made not one but TWO stops at the Rock and Roll Hotel (both completely sold out) and brought with them proof that they are one of the most exciting bands in recent memory.

After arriving to the venue a couple of hours early, I was surprised that there were already people congregating around the doors in anticipation.  And by the time the doors did open there was a line (in a decent rain, mind you) just to get in.

And as the band made its way onto the stage, Grian along with bandmates Conor Deegan III (bass), Carlos O’Connell (guitar), Conor Curley (guitar), and Tom Coll (drums) started the set with “The Lotts” from the new LP. As the band held the steady rhythm, Grian paced like a big cat in a cage — lurching forward at times to make sure we were on our toes — recalling bands like The Fall or Joy Division with that barely restrained manic intensity.

Watch the official music video for “Boys in the Better Land” by Fontaines D.C. on YouTube:

As the band played through tracks from the new album, this audience fed off that intensity, wanting more as Fontaines D.C. played the single “Boys in the Better Land”and “Too Real,” and ending fittingly with “Big” with the refrain, “My childhood was small, but I’m gonna be big.” They certainly are.

Fontaines D.C. continues there tour here with further dates in the fall, including back in the District at the U Street Music Hall on Wednesday, Sept. 11! Definitely make it a point to check them out. Buy your tickets online!

Here are some photos of Fontaines D.C at the Rock and Roll Hotel on May 11, 2019. All photos copyright and courtesy of David LaMason.