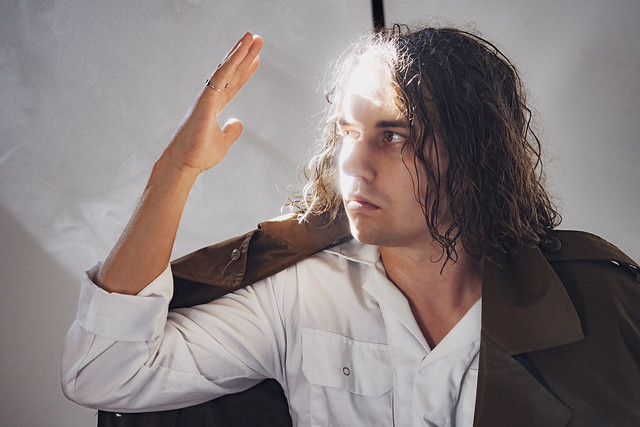 Kevin Morby released Oh My God, a double-album concept record, in April via Dead Oceans. He arrives at 9:30 Club on Saturday, June 1, to present his ambitious new music.

“It’s meant to be playful, despite the morbid subject matter, and sing sonic praise to rock n roll as a religious experience. More than anything — it’s [a song] about gun violence in America. Sutherland Springs, Vegas, Parkland… the list gets longer each year, filled with more cities, more innocent victims and yet nothings fundamentally changed,” Kevin said.

He added, “It’s a sad, scary, and ultimately incredibly frustrating affair. We’ve all made peace with the fact that every time we leave the house we could be senselessly murdered at the hands of someone who should never have been given that power. The song is meant to mirror a public tragedy with its hard pan to the choir almost two minutes in. It’s rolling along, living it’s best life, when suddenly, with a gasp, reality has been turned upside down and all there’s left to do is pray to god you don’t die.”

In a review for Paste, Zach Schonfeld said Kevin’s latest is a “non-religious religious record” that warrants your attention.

“Some records demand to be heard with headphones. Oh My God is not one of them. I first heard the album shortly after being laid off from a newsroom job, which meant Morby’s music was ringing out loudly in my empty apartment instead of piping into my headphones on an overcrowded subway. This seemed to suit its messy, god-obsessed exuberance: Let it ring out wherever you can. If any actual believers were within earshot— well, that’s fine too,” Zach wrote.