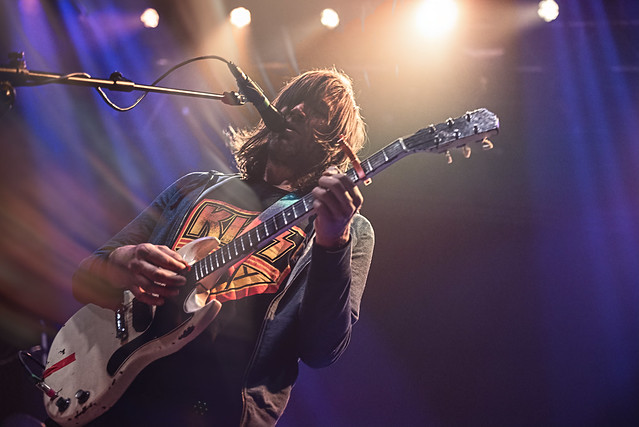 Taking his cue from punk, country, and ’60s pop, The Lemonheads’ catalog is also interspersed with covers that are as disparate as Paul Simon, Whitney Houston, and The Misfits. So it’s no surprise that in 2009, The Lemonheads released an entire album of rare covers by the likes of Gram Parsons, Leonard Cohen, and even GG Allin. And now, 10 years down the road, Dando and company has released the follow up, titled Varshons 2 with really cool covers of Nick Cave and the Bad Seeds (Straight to You) and John Prine’s “Speed of the Sound of Loneliness,” among others. And to promote the band’s first album in 10 years, The Lemonheads toured, bringing these fuzzed out sounds to the 9:30 Club Thursday night.

The last time I saw The Lemonheads proper was back in 2011 at the Ottobar in Baltimore where they played the entirety of It’s A Shame About Ray and a host of additional songs (including a great cover of “Streets of Baltimore” by Gram Parsons — one of my all time favorites!), but the last time I caught Evan solo was just a couple of years back when he played a set that spanned well over 40 songs. So I was curious about what surprises might be in store.

On June 13, The Lemonheads appeared at 9:30 Club on tour with Tommy Stinson (yes that Tommy Stinson of The Replacements and Bash & Pop). It was really great seeing Tommy tear it up with an amazing solo (mostly acoustic, except for a very electric “Friday Night Is Killing Me”) set just before The Lemonheads took the stage.

To the tones of Ella Fitzgerald singing “Miss Otis Regrets,” The Lemonheads made it onto the stage and immediately launched into “Dawn Can’t Decide” from the LP Come On Feel The Lemonheads. And by “launched” I mean the Evan and the band took off and didn’t slow down one bit.

With touring bandmates Chris Brokaw (guitar), Farley Glavin (bass), and Lee Falco (drums) (also of The Restless Age who opened the evening), Dando went through nearly 30 songs before the night was over.

Even before the last note faded away the crunching power chords of “Break Me” blasted through. Other than the occasional announcement of song titles (“This one’s ‘Hospital'”) there was little stage banter. After the show I overheard someone remark that it was very reminiscent of the Ramones. And after some thought, I think that would best describe the energy coming from the stage: fast, powerful, right to the point.

Frequently squalling feedback from one hit became the intro to another power pop gem.

I always loved Evan Dando’s voice. Over time he’s shown his love for old Country tunes and on Thursday night he sounded in top form! Especially on the John Prine tune “Speed of Sound of Loneliness.” Evan and the band had some great harmonies especially on “Tenderfoot.” And it wasn’t just the covers that were highlighted (although every time I hear “Different Drum” I can’t get it out of my head) as the band played crowd favorites such as “Great Big No,” “Shame About Ray,” and “Into Your Arms.”

Near the end of the evening, as the other band members left the stage, Evan played on solo with “Frank Mills” from the musical “Hair” as well as “The Outdoor Type” and “Hard Drive” from his solo album.

For the encore, the band, along with keyboard player/singer for Restless Age, Will Bryant, to wrap up an amazing set. The Lemonheads have wrapped up their tour, but I’m hoping they’ll be back around soon!

Here are more photos of The Lemonheads performing at the 9:30 Club on June 13, 2019. All photos copyright and courtesy of David LaMason.