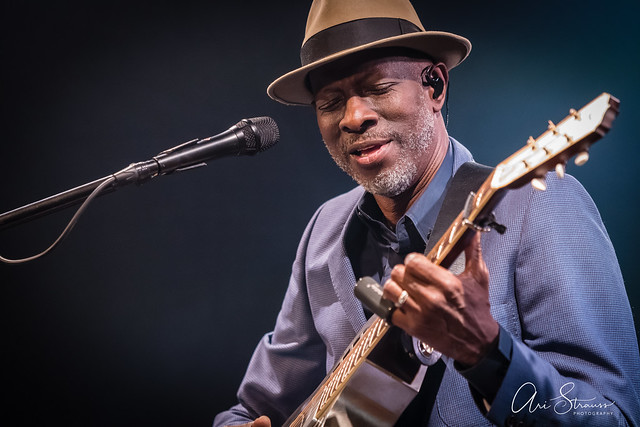 Robbie Moore refers to her husband and modern blues legend Keb’ Mo’ as the happiest man in the blues world. Keb’s happy disposition was evident when the four-time Grammy Award-winning singer, songwriter, and guitarist took the stage at The Birchmere in Alexandria recently to delight fans with a nearly two-hour solo set.

The performance occurred on the eve of the album release for Keb’s new album, Oklahoma, which dropped June 14 on Concord Records.

Listen to Oklahoma by Keb’ Mo’ on Spotify:

With Oklahoma, Keb’ offers fans a collection of songs that reflect his own passions and interests. “When you are in a certain part of your life, the concept of an album is woven into the process,” Keb’ said when assessing his inspirations for the album. “All of these songs stemmed from important issues and topics worldwide that really resonated with me during the time we were recording the project.”

Indeed, throughout his quarter century as a recording artist, Keb’ has earned a reputation for his ability to draw from his bottomless expertise of roots music to make deeply expressive, highly personal music.

“At some point, I began to realize that it’s not just about writing a good song with a good hook and good lyrics, but it’s also about writing songs that had something going on inside,” Keb’ said. “So I started spending a lot of time rewriting lyrics, recording, rerecording, and really working hard at it. I got to a place where I where I understood the anatomy of how lyrics can work, and how I can use them to put some substance into the song. It’s like Jelly donuts. I don’t even like jelly donuts, but you know every time you bite into one, there’s gonna be something inside. At some point, I realized that you have to tell a story in some way, shape, or form, and [Oklahoma] is a continuation of that realization.”

Keb’ opened the show with “Every Morning,” a hit from his 1994 self-titled debut album. With the crowd warmed up, he dropped in material from his new album with “I Remember You,” a song with a driving beat about a man seeing a woman he’s met before and lamenting the emotional scar he feels from their first encounter.

I remember you, dancing’ on the floor
I remember you walkin’ out the door
You had a red dress on and some high heel shoes
You don’t remember me, but I remember you
You tore my heart apart the moment you left
Junior had a night he would never forget

At one point during the performance, Keb’ got up from his vintage shop stool to shuffle through some record albums sitting next to a sea-foam green record player on a credenza at the back of his stage setting. An audience member shouted out jokingly, “Are you gonna play us a record?” Without cracking a smile, he replied, “I’m not gonna play a record.  The record player’s gonna play the record. I’m gonna walk around and shake some hands.” And with that, he jumped from the stage to do a lap around the room, shaking hands, offering hugs, and a few quick dances with fans while the record spun on stage. 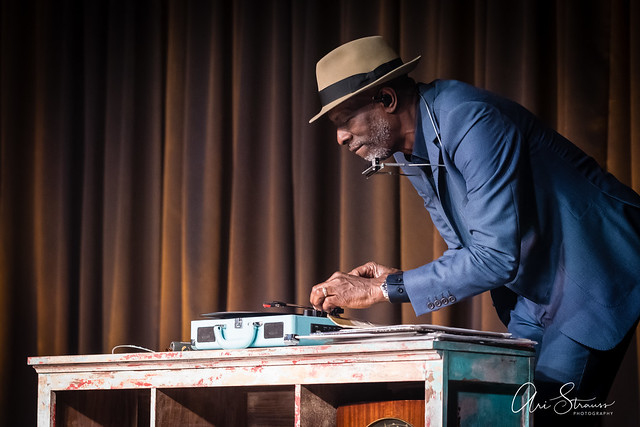 Keb’ Mo’ spins a record during a performance at The Birchmere on June 13, 2019. (Photo by Ari Strauss)

In introducing the title song from his new album, Oklahoma, Keb’ rhetorically asked the audience, “What do I know about Oklahoma? Very little.” He explained the song’s inspiration started with a visit to the state for a benefit show with Kenny Wayne Shepherd after the 2013 tornado which ravaged the city of Moore, Oklahoma, killing 24 people and injuring 212 others. In witnessing the tornado’s aftermath, Keb’ recalled, “I thought about what it must be like to live in Oklahoma and all the great people that have come from [there].”

But, with just a simple melody in his head and little personal connection to the state, the song was almost didn’t happen — that is until the hands of fate led him to the meeting of, and songwriting session with, singer-songwriter Dara Tucker, who is a native Oklahoman.

Together, they set about to portray the complicated depth of American history played out in Dara’s home state. Native American connection and tragedy, natural and man-made disasters, incredible musicians and the Tulsa Sound, and western ruggedness and fortitude — all these themes fueled the song. Notable is the mention of Greenwood/Archer and Pine, known as “Black Wall Street,” which was infamously destroyed in 1921 in one of the most devastating massacres in the history of US race relations.

Keb’ mentioned that Robert Randolph masterfully added a haunting air with his lap steel guitar on the album version of Oklahoma. “We chose to make the song sound light-hearted and ultimately about resilience,” Keb’ recalled, “[but] then Robert came in and added some musical flavor. The result was beautiful, and I thought it had to be on the record, and ultimately what I chose to be the album’s title.”

Keb’ next sang, “Henry,” a song about his close friend, Henry Saint Clair Fredericks, more commonly know as Taj Mahal. In 2014, Keb’ told the Nashville Tennessean, “I’m a Taj [Mahal] disciple. What I love about Taj is that he has great songs, and he is very adventurous musically, as well as soulful and bluesy and roots-oriented.” In 2017, the two bluesmen collaborated on an album, TajMo, which won a Grammy Award for Best Contemporary Blues Album.

Listen to TajMo by Taj Mahal and Keb’ Mo’ on Spotify:

In introducing the song, “Put A Woman in Charge,” a timely feminist anthem he recorded with Rosanne Cash in 2018, Keb’ told the audience of the song, “Its about putting some nurturing feminine energy into how our country operates. It was supposed to be a stand-alone single, but I loved the way it turned out, so I had to put it on the album. I’d never worked with Rosanne before, but someone suggested she might like it. She said yes and she put down her part, and it was just so badass,”

Keb’ closed out the main set with, “This Is My Home,” a heartfelt musical tribute to the struggles of immigrants. The song, about a Mexican female and a Pakistani male who make a future together in America, humanized an often-divisive issue. Keb’ drew his own story into the latter part of the song.

Setlist:
Every Morning
I Remember You
Tell Everybody I Know
More Than One Way Home
Rita
Dangerous Mood
Oklahoma
Henry
Angelina
Am I Wrong
[Record Player]
Suitcase
Life Is Beautiful
Old Me Better
Put a Woman in Charge
Government Cheese
Shave Yo’ Legs
The Whole Enchilada
This Is My Home

Encore:
She Just Wants to Dance
I’ll Be Your Water

This is the second opportunity I had to review a Keb’ Mo’ performance at The Birchmere.

Enjoy some additional photos from Keb’ Mo’s June 13, 2019 performance at The Birchmere. All images copyright and courtesy of Ari Strauss. 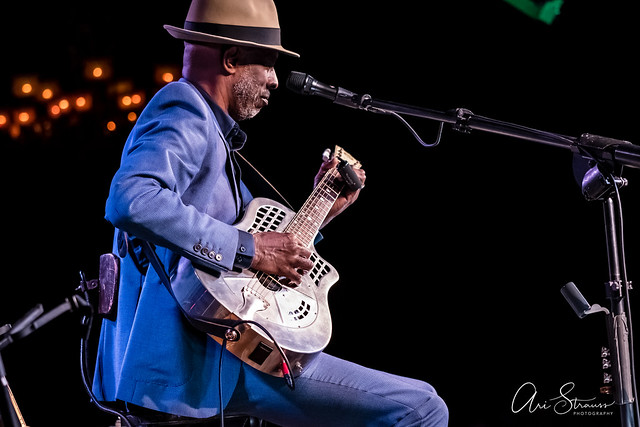 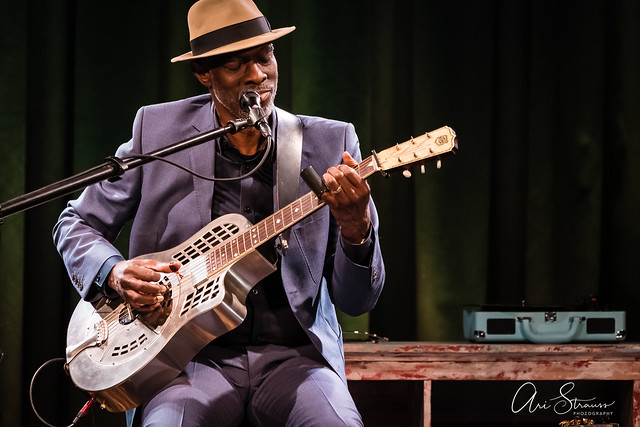 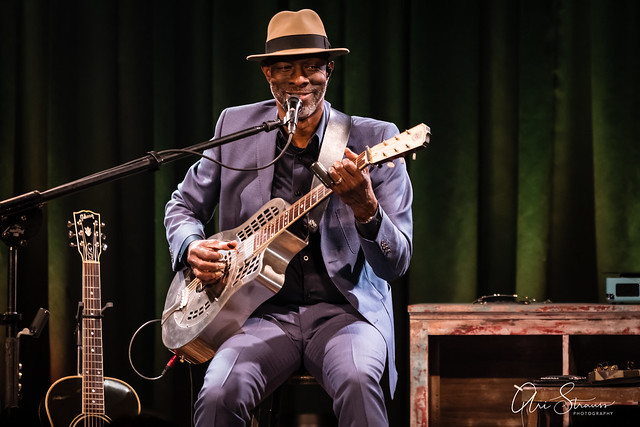 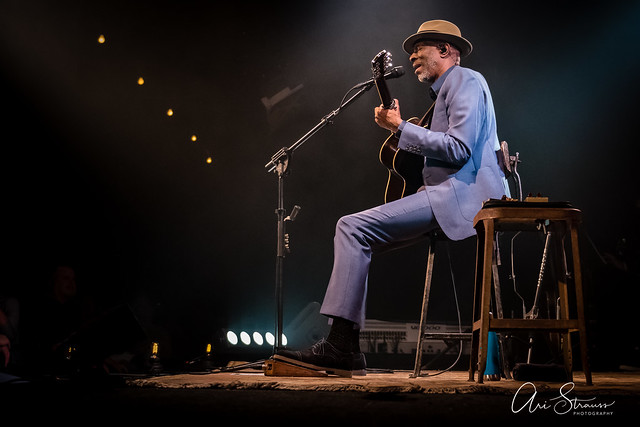 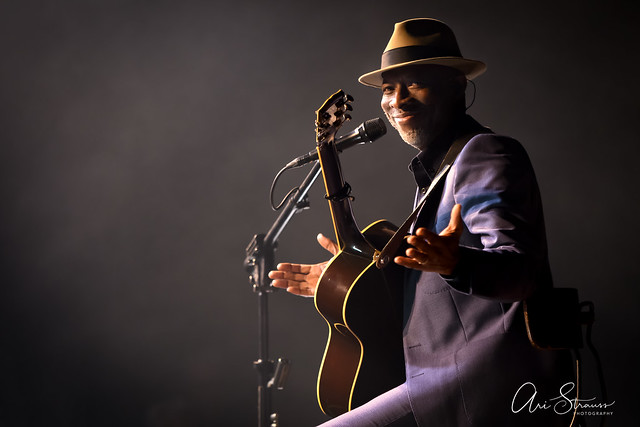 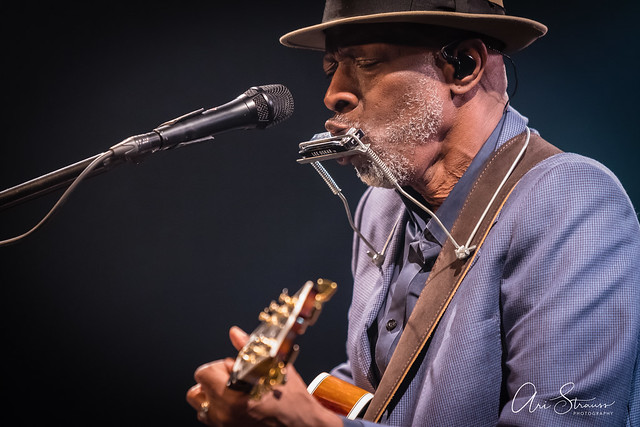 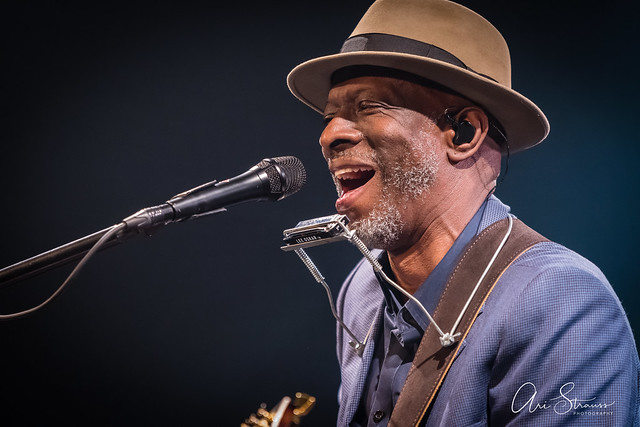 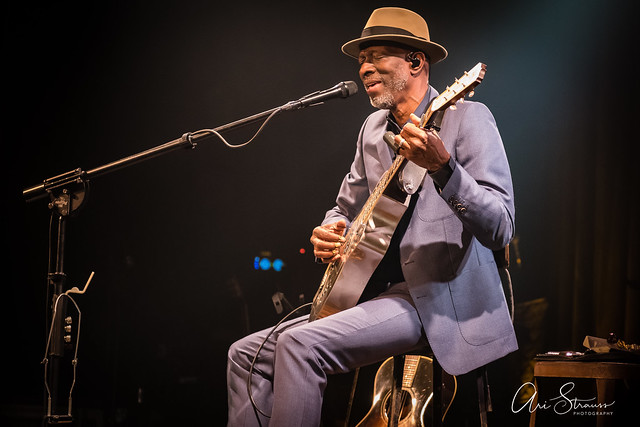 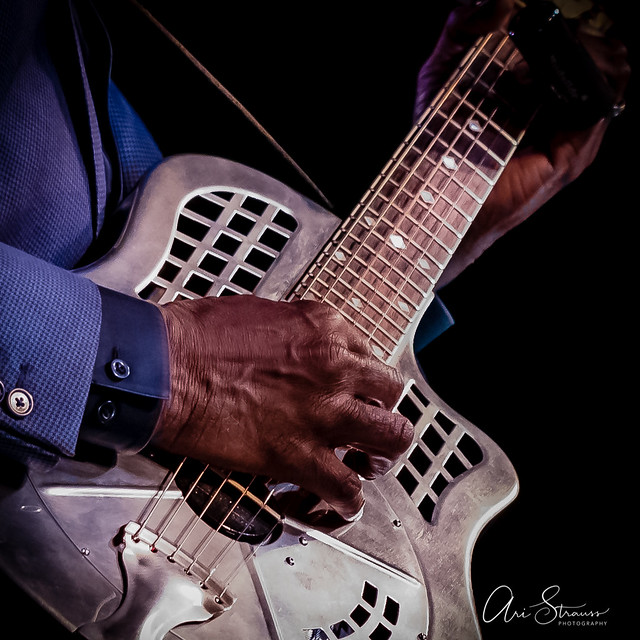 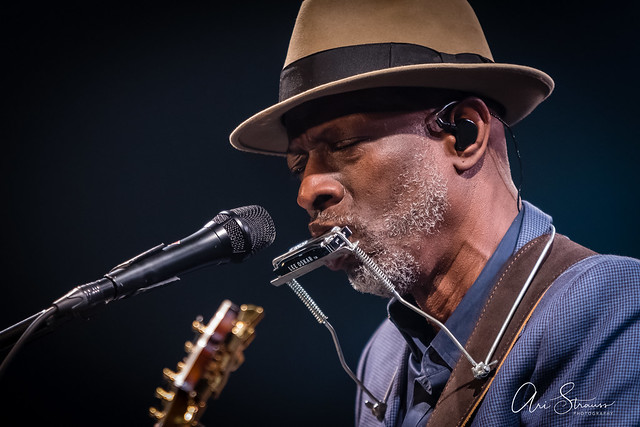 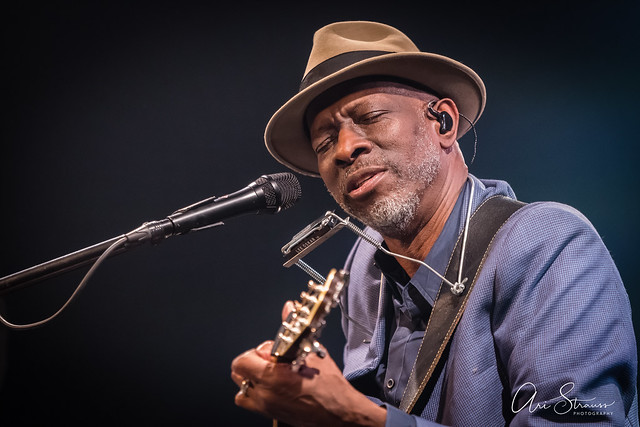 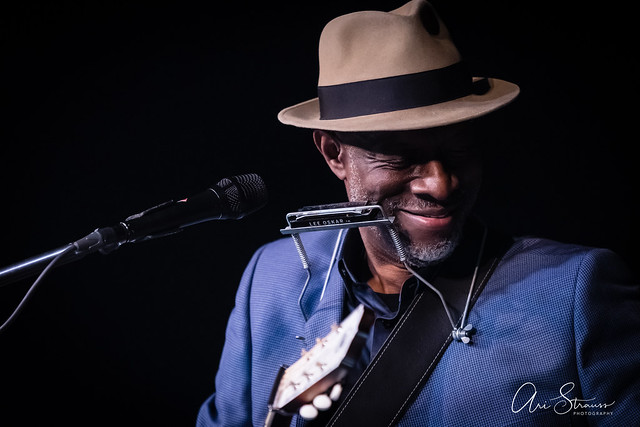 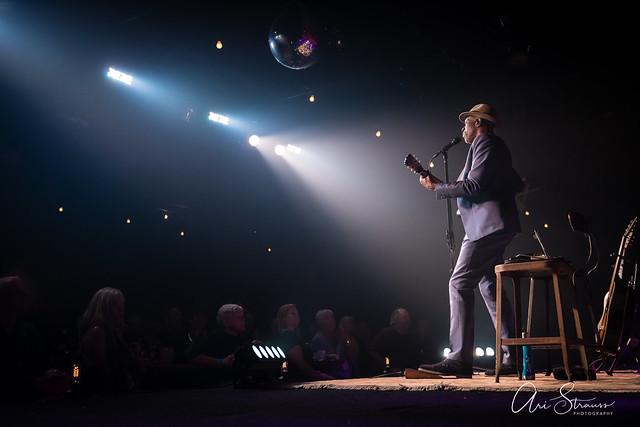 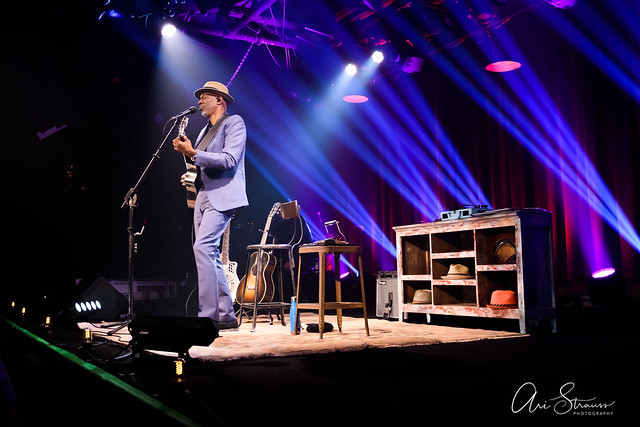 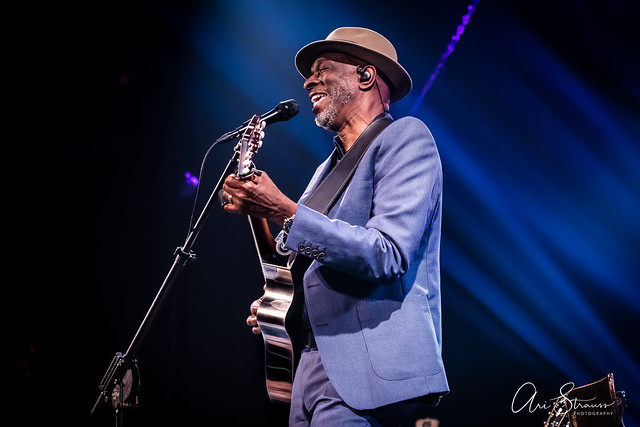 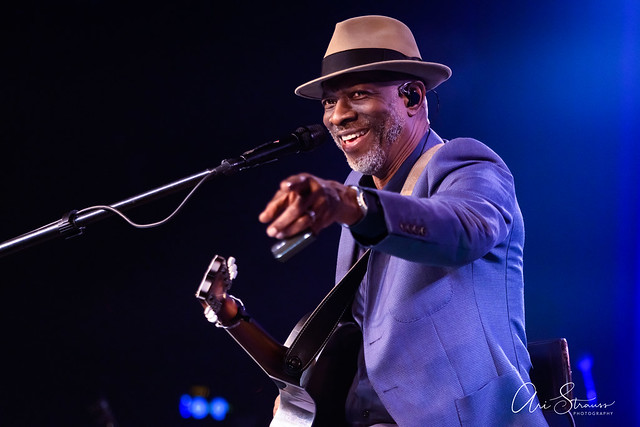