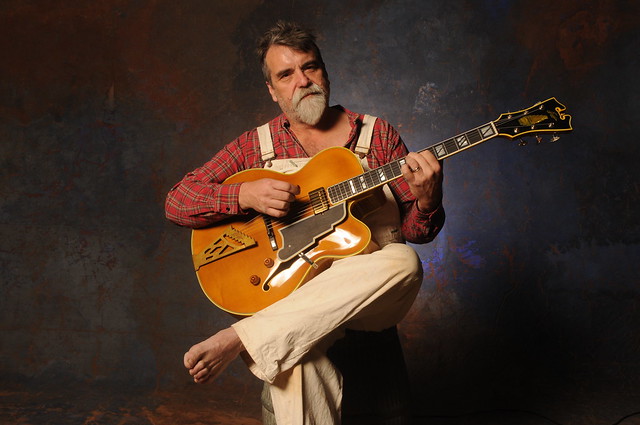 Darrell Scott is a master songwriter: Travis Tritt and the Dixie Chicks have taken his songs to the Country Top 5, he’s been voted Nashville Songwriter of the Year, and he’s received a Grammy nomination for Best Country Song.

But Darrell also has the blues deep down inside his body, his bones, his heart, and his soul. Not the kind of blues you have when you’re sad. This kind of the blues that is the fire in the belly of all American music. It is seductive danger and gentle love, the harsh growl of the wolf of the door and the tender croon of the father’s lullaby at the baby’s cradle. And it all came out at a recent show at AMP by Strathmore.

On June 13, all Darrell needed to tear it up was a few instruments, his pipes, and the blues. Darrell is the kind of master carpenter who can build a cathedral from six pieces of balsa wood: He’s a second-generation musician with a literature degree from Tufts and picking skills that earned him his other Grammy nomination — for Best Country Instrumental.

Having just awaken from a nap, Darrell’s voice was about a third lower. His vocals seemed just right, though, for the evening’s material. (It is being on key, more than which key, that matters.) He started on the piano, and he mentioned how nice it was to have it there. “Lots of gigs don’t have it,” he said. While Darrell’s music fits somewhere, broadly, in country, that doesn’t really characterize his first couple songs. “The Open Door” and “Double-Headed Eagle” were classic piano-driven, elegantly crafted singer-songwriter pieces.

Picking up his electric guitar, Darrell made his introductions. This was his first appearance at AMP. With its fourth-floor location, the last pastel colors of sunlight bled through the room’s large windows when Darrell took the stage at 8:45pm. He told the audience he’d do two sets, which along with the opening with the opening act made for a full night of music. By the time he’d finished, the last train had left White Flint Station, about a 10-minute walk away.

Darrell took a rootsy turn toward the blues for the next several songs. Introducing “The Ballad of Martha White,” he humorously recounted his infatuation with the spokesmodel for the brand of flour, his dedication to her eponymous radio show, and his disappointment when he finally saw his idol in person. “Miracle of Living” incorporated a country ramble in its melody, and a perfectly timed register drop on the last note.

Perhaps referencing an inside joke, Darrell said, “I wanted to send this next song out to you out there. You know who you is,” and played “Someday,” after trading his electric guitar for an acoustic one.

For the previous three nights, Darrell was off work, and he spent that time in DC, Darrell told the audience. He visited two museums that he really wanted to see, the National Museum of African American History and the National Museum of the American Indian. The latter had a display about the first Thanksgiving. Reflecting on that, Darrell decided to include his song “The Day Before Thanksgiving” this evening.

Darrell has co-written with a lot of people other the years. This included the late Guy Clark as well as Verlon Thomson, who often toured with Guy. Darrell and Verlon rewrote the traditional folk song “Old Joe Clark” as “Banjo Clark.” Darrell and Verlon’s reimagining of the song goes head on at America’s racial problems. The banjo, as Darrell noted, came from Africa.

After “Banjo Clark,” Darrell gave a call-out to his sound technician, Eric. Eric absolutely deserved it, as the sound quality as was crystal clear. Having Eric on tour allowed Darrell to record every night. Every night, he said is different. “I don’t know,” said Darrell, “how to sing a song the same way twice.” Top singing coaches charge steep prices just to tell their clients to do what comes naturally to Darrell.

Darrell stirred the pot by asking if the show was taking place in the South. He’s from Kentucky, which like Maryland was also south of the Mason-Dixon Line and a slave state, but which remained with the Union in the Civil War. He needled the crowd a bit on just what defines the South, whether it’s history of slavery, allegiance during the Civil War, or something else, hinting at the red-blue divide. Darrell surely knew that he’d get a reaction, and he seemed tickled with the murmurs that sputtered out. This moment really crystallized what a comfortable performer Darrell is, who can casually make engaging, substantive banter. And all of this was in service of introducing “Head South.”

After getting twangier with “Head South,” Darrell broke out one of his big country hits for the last song of the first set. The Dixie Chicks’ cover of “Long Time Gone” went to #2 on the Country chart. While that song enjoyed huge mainstream success, Darrell said he hid a commentary on modern country music in the third verse, and he got away with it.

After intermission, Darrell thanked everyone for staying. “I had to,” he said, “but you didn’t.” Sliding into the second set, he said, “I just met a man from Baltimore who wanted to hear this,” and played “Love Is the Reason.” The song appeared on Darrell’s most recent studio album, Couchville Sessions, released in 2016 via Full Light.

Darrell paused to talk about his friend, the late songwriter and doctor Ben Bullington. Ben made his living in medicine, and he just did the music thing on the side. When he got the news that the tests showed he only had a year left to live, he went out and toured. Darrell wanted the audience to know that “There are people who don’t give up their regular jobs, and they’re great.” He played one of Ben’s songs, “Born in ’55,” on the piano.

Growing up with all kinds of country music had an impact on Darrell: old country music, new country music, and the hillbilly music of the ‘30s and ‘40s from his parents’ generation. The music from that generation was all about drinking and cheating. Today’s country music is different; if there is drinking, it’s probably cocktails with umbrellas, and there might be bikinis involved.

Darrell made an album that evokes ‘30s and ‘40s country, Long Ride Home, a 2012 studio album released by Full Light. He got the sound he wanted by hiring old country sidemen from that era like Pig Robbins, who played piano on George Jones’ first hit. Pig played on “Too Close Comfort.” While Darrell may be no Pig, there was definitely something cooking during this tune.

Getting toward the back half of his set, Darrell plugged in his electric guitar once again and played a scorching rendition of “You’ll Never Leave Harlan Alive.” Changing direction, he followed that with a tender ballad, “Love’s Not Through with Me Yet.”

Setting up his acoustic guitar, Darrell explained that the events in “Long Wide Open Road” took place 40 years ago. He didn’t write the song, however, until 30 years later.

For the next song, Darrell took the electric guitar with him to the piano bench. Midway through “Poor Wayfaring Stranger,” he switched instruments, making for a rather unique version of the song. He joked about playing the guitar behind his back before “With a Memory Like Mine,” and the audience that maybe, just maybe, he might do it, until he finished the song.

Artists like Darrell Scott are the type of musicians that make Americana fans love the genre. He possesses a remarkably well-rounded set of musical skills and a fierce intellect. With his attentiveness to traditions, he is also sensitive to history — to real history. Darrell uses his art to express his distinct personal perspective, and he’s not afraid to ask his audience to think. Anyone who appreciates good songs performed well, country music fan or not, will enjoy seeing his show.