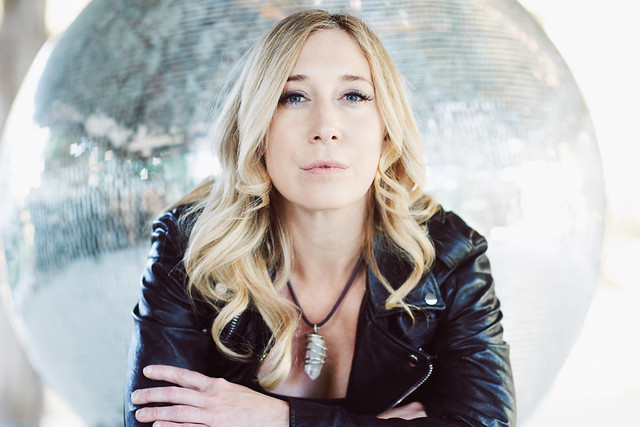 In our native Ohio, you don’t have to go far from the city, whether it’s Erika Wennerstrom’s Dayton or my Akron, to be in well-water territory. Erika’s singing is a well: deep, resonant, and very, very cool, firm and sturdy.

Erika’s singing is three-dimensional. Close your eyes while she performs, and you can swim in it. There’s a hint of sweetness (though less than in her speaking voice) in the hard water she seemingly draws from the bones of the Earth. At Gypsy Sally’s on June 20, the audience replenished their souls in the waters of Erika’s voice.

Erika is the longtime lead singer of and chief songwriter for the Heartless Bastards, who are currently on hiatus. She included a couple of Bastards songs in her set: “Hold Your Head High” and “Sway.” Her focus, however, was on material from the solo album she released last year, Sweet Unknown. She started with the lead track, the road-tripper “Twisted Highway.” The rhythm from Erika’s acoustic guitar on the next song, “Letting Go,” gave it a light, airy feeling.

In 2015, just before recording the last Heartless Bastard record, Restless Ones, Erika went on a trip to the Amazon rainforest. She went for an ayahuasca retreat to deal with longstanding unhappiness. Though medicine hasn’t adopted ayahuasca, other psychedelics, like ketamine, are being used to treat to chronic depression and pain. (I’ve had two successful ketamine infusions for headaches that have not responded to other forms of treatment.) Erika made a huge number of notes while on her trip, some of which eventually became “Like a Bird.”

As part of her personal growth process, Erika explained that she has learned that she doesn’t do anything to bring negative energy on herself. She does, however, internalize it. She gave a lot of thought to the kind of energy she wants to be around, and she wrote about that in “Staring Out the Window.” She also told the audience that she frequently repeats the title of the song of the “Be Good to Yourself,” and she’s discovered that it can be “Good to Be Alone.”

Erika’s music has always had at least a strong hint of country. Recently, she released a couple covers of songs by the great country singer-songwriter Townes Van Zandt online. One of those is a cover of “Be Here to Love Me.” Erika mentioned that her friend Margaret Brown made an excellent (93% fresh on Rotten Tomatoes) documentary about Townes with the same title.

In the end, Erika finished her set with a very different cover, the Rolling Stones’ “Paint It Black.” It’s perhaps not a coincidence that Erika would choose Townes and the Stones. While Townes is acknowledged as a precursor to Americana music, the Rolling Stones appear to be the most influential British band on that milieu.

After her set, the crowd gave Erika a standing ovation to coax her back out for an encore. For her encore, Erika sang two very different love songs. “Only for You,” a Heartless Bastards song, is about love for another. “Extraordinary Love,” from Sweet Unknown, is about love for self. At the end of “Extraordinary Love,” the audience stood once more in appreciation of the talents of Erika and her band.

Erika’s singing was the highlight of this show, and the band didn’t let their playing get in the way. They played loud rock ’n’ roll, but it didn’t interfere with the vocals. They carefully pushed the volume and intensity as far as they could without drowning out Erika’s vocals. It’s a tough balancing act, and they succeeded where a lot of bands fail and end up making it impossible to understand the lyrics. Good sound work can also be credited here: the show sounded crisp and clean.

When a vocalist as stunning as Erika has such strong material, you’re almost guaranteed a great show. When her backing band understands how to complement her singing, how to serve as the scaffolding to hang the songs on, you’re most of the way there. Throw in great sound quality and an appreciative crowd, and you have an excellent evening of music.