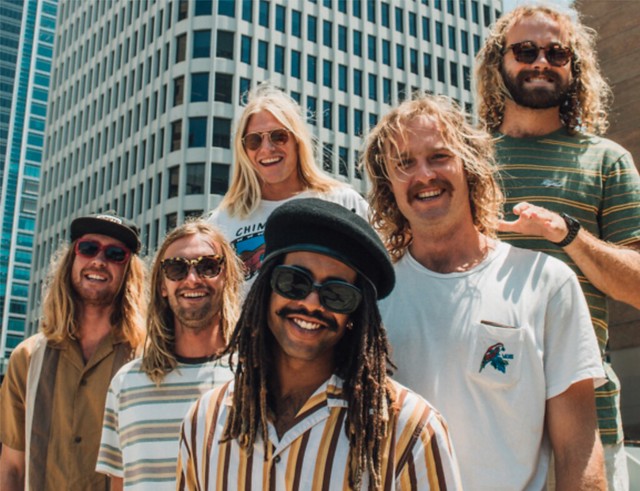 If you’re still looking for this year’s summer jams, look no further than Australia — and more specifically, Australian band Ocean Alley. The band brought summer to the Rock and Roll Hotel recently!

Hailing from the Northern Beaches of Sydney, this six-piece band is gaining popularity in Australia and beyond. Chiaroscuro, the band’s most recent album, debuted at #15 on the ARIA (Australian Recording Industry Association) Chart. Australian national radio station “triple j” awarded Chiaroscuro the prestigious “triple j Feature Album” stating, “Ocean Alley have surfed their way to ‘Next Big Thing’ status.”

Ocean Alley is about midway through their North American tour and made a stop at the Rock and Roll Hotel on June 22. I wasn’t sure what kind of crowd to expect, but the place was pretty full! Fans loved the performance, and I think I even heard a “one more song” chant after the encore. The group played all of the songs I hoped they would, including their cover of Player’s 1977 hit “Baby Come Back.” It was a fantastic show, and I found myself singing along all night.

When it comes to the genre of music, Ocean Alley has been described in many ways. I am not really sure how to best classify them, you will have to take a listen and see what you think. What I can tell you is that their music is brilliantly layered to create a smooth yet dynamic sound. It is bright, yet relaxed. With six members in a band, it requires great chemistry and collaboration to make the different instruments and voices blend together. Ocean Alley has achieved this, and it’s no wonder that they already have more than 1.4 million monthly Spotify listeners.

Take it from me, this is the music you want coming through your speakers (or headphones) this summer. Whether you’re riding in your car with your windows down, sitting in the backyard catching some rays, or laying out at the beach, Ocean Alley is going to hit the spot.