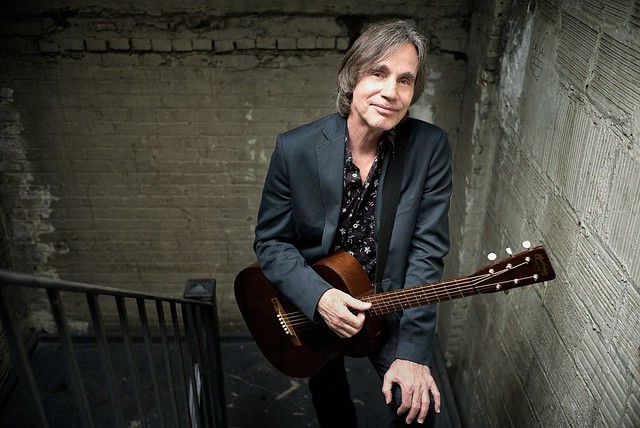 Legendary singer-songwriter Jackson Browne, one of the most influential artists to emerge from the folk-rock era of the ’70s, will perform at Wolf Trap’s Filene Center on Wednesday, July 3.

Inducted into the Rock and Roll Hall of Fame in 2004 and the Songwriter’s Hall of Fame in 2007, Jackson’s hauntingly beautiful songs of innocence and lost love — “Running On Empty,” “Doctor My Eyes,” “Somebody’s Baby,” “The Pretender,” “Boulevard,” “Take It Easy,” and countless other classics — still resonate today.

When asked by Rolling Stone in 1980 about the deeper meanings behind some of his songs, Jackson mused, “It’s very difficult for me to do this because I’d love to tell you what I think. But I believe that it’s wrong for me to explain my songs. It’s unnecessary and it’s also dogmatic in that it limits another person’s interpretation. And I really don’t think that the songs need to be explained. I believe that, given enough time and listening, they’ll mean what they’re supposed to mean.”

Watch Jackson Browne perform “Running on Empty” live at his induction into the Rock and Roll Hall of Fame in 2004:

Jackson is also well known for his advocacy on behalf of arts education, the environment, and human rights. He’s the co-founder of Musicians United for Safe Energy and NukeFree.org, a member of the ocean advocacy organization Ocean Elders, and has received such accolades as the John Steinbeck Award, Duke University’s LEAF award for Lifetime Environmental Achievement in the Fine Arts, and an honorary Doctorate of Music by Occidental College in Los Angeles for “a remarkable musical career that has successfully combined an intensely personal artistry with a broader vision of social justice.”