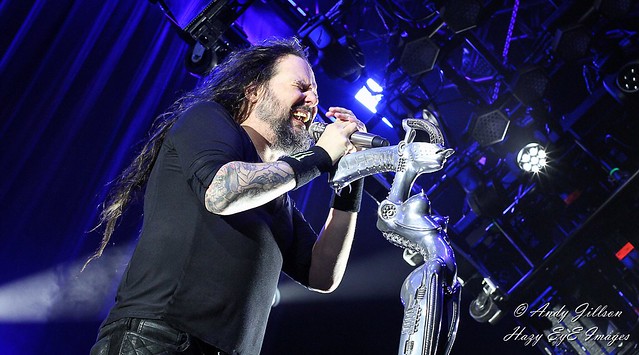 One of the biggest metal bands harvested from American soil stopped in Bristow, Virginia, recently to kick ass in front of about 20,000 devoted fans at Jiffy Lube Live! Of course, I’m talking about hard-rocking musical pioneers Korn.

A band for more than 25 years now, Korn have all the talent, uniqueness, and raw animalistic energy as they did when I first saw them opening for KMFDM in 1995. Whoa. A long time ago. They killed it then and they’re still killin’ it! It’s no surprise that Korn became one of the biggest metal bands in the world, and that they still are today.

Korn is currently out on a North American summer tour with fellow hard rock giants, Alice in Chains. Though the two acts may not necessarily seem like they would play well off each other; the truth is quite different than what may seem to be. Both bands blew up with mainstream success long ago. They have had different paths and styles throughout their careers, but Korn and Alice in Chains complemented each other extremely well, and the two delivered amazing hard rock and heavy metal music at Jiffy Lube Live on July 31.

Korn played a well-crafted set at Jiffy Lube Live. My time in the photo pit was over in a blink though. Three Korn songs can go by very fast. They actually played one of my personal favorites “Divine” while I was in the photo pit. Fucking insane. I had to stop taking pictures for a minute so I could lose my shit with the rest of the crowd smashed up against the barrier. The band played 15 great songs in total, and even threw in a bit of Metallica’s “One” during “Shoots and Ladders” to the delight of the crowd.

Other noteworthy songs Korn played included “Blind,” “Twisted Transistor,” “Make Me Bad,” “Freak on a Leash,” “Twist,” “Coming Undone,” “Falling Away From Me,” and a new song “You’ll Never Find Me.”

Korn recently announced the release of a new studio album, THE NOTHING. It’s their first studio album since 2016’s The Serenity of Suffering. I would highly suggest going to see Korn on tour this summer for a fun and hard-rocking musical event.

Enjoy a few of my favorite Korn videos on YouTube!

Here are more photos of Korn performing at Jiffy Lube Live in Bristow, VA on July 31, 2019. All images copyright and courtesy of Andy Jillson.