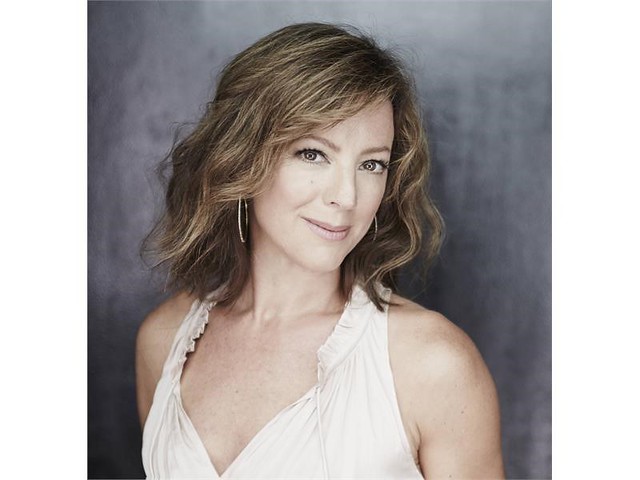 Backed by her band and the National Symphony Orchestra, Sarah MacLachlan endured a hot night at Wolf Trap recently to repeatedly stun the audience with her amazing vocal performance.

The Canadian mezzo-soprano has sold more than 30 million albums, and she has won three Grammys. She won two of these for Surfacing, her bestselling albums including Best Pop Vocal Performance for “Building a Mystery.”

On Aug. 3, Sarah opened her second set with that tune, explaining how she wrote it during a nine-month period when she lived off of Bourbon Street in the French Quarter of New Orleans. She described the song, with its references to vampires and voodoo, as “full of subcultures.” Put in the context of New Orleans, with it rich history and diversity, the song took its place in a great Southern Gothic tradition that has attracted storytellers from far beyond the region.

Sitting down at the piano after the first song of the show, Sarah introduced “I Will Remember You” as “a song I wrote for a small independent film called the Brothers McMullen.” The film and the song are both excellent. Sarah won Best Pop Vocal Performance for the live version of the song.

Sarah opened her first set with “Possession,” drawing applause for a long, high note, as she would several times throughout the evening. While the evening was hot enough to make to someone a few rows behind me pass out (and another at the metro station as I was headed home), Sarah did not hold back on her vocals. She gave the crowd what they came for.

Sharing a story with the audience, she confessed that she fell in love with her best friend’s ex — a story that she did not feel presented her in the best light. She went on to marry drummer Ashwin Sood in 1997. They divorced in 2008. She patched things up with her best friend, so that relationship has proved more enduring. The song “Adia” was written about her feelings toward her “bestie” when things were tense between them.

Sarah was writing a song about bullying for her last album, and it brought up a feelings and memories from her junior high years when she was bullied. She was having trouble finishing the song until she saw what happened with Malala Yousefzai, who was shot for advocating education for girls in Afghanistan, and still didn’t give up her advocacy. This inspiration allowed Sarah to finish “In Her Shoes.”

Nine years ago, Sarah lost her father to cancer. She said that her father, who had a quiet, humble presence, was her rock. Every night, she sings “Song for My Father” for him.

Stream Shine On by Sarah McLachlan on Spotify:

Forgiveness is very important to Sarah. That includes forgiving yourself, she told the audience. Sometimes, she said, the universe tries to teach you something, again and again but you just don’t get it. That’s the subject of “Fallen.”

After a breakup, Sarah told the audience, we question ourselves, and what we did wrong. We are prone to ask if there are flaws in our character. Sarah said that we have no choice “but to put one foot in front of the other and move on.” She quoted RuPaul, who says, “You can’t love someone else if you can’t love yourself.” Then, she closed her first set with “Rivers of Love,” and went to a 20-minute intermission.

Coming back from intermission, Sarah opened with “Building a Mystery.” She changed guitars to play “Hold On.” People read into many of her songs being about her divorce, but “U Want Me 2” really does address it. She wrote the song in the early stages of the process, when her ex-husband was living in the basement, and it wasn’t clear if they were just on a break, or if they were splitting for good.

“Answer,” which Sarah played on the piano, is about the first stages of love, “when you’d just do anything for someone.” She said she has a new “sweetie,” who is “delicious.”

Parenting teenagers is hard, Sarah said. The singer has two daughters, ages 17 and 12. She wrote “Beautiful Girl” for them, and she hopes that, as they go out into the world and make the mistakes they have to make, they know they have a soft place to land.

Sarah told the audience that she finds catharsis in writing dark, sad songs. One of those songs, “Sweet Surrender,” was inspired by the movie Leaving Las Vegas. As a single, the song was sped up and made more upbeat to make it more commercially appealing. With an orchestral intro, Sarah sang it in its original slower, more somber version.

When she got divorced at 40 and had two young daughters, Sarah had doubts that she would meet anyone again. But, as happens to most people, she did. She wrote “Loving You Is Easy” about a man she met who presented well but, unfortunately, “turned out to be a jackass.” At least, she said, she got a song out of it.

Sarah invited the audience to sing along on the last song of her set, “Ice Cream.” Returning for an encore, she began with “Fear.” She explained that she wrote “Love Comes” for a movie, but when she saw the script, she could tell the movie wasn’t any good. Finally, she sent the audience home with her signature song, “Angel,” giving her backup vocalist (and bassist) an extended an extended highlight in the process.

Sarah has an absolutely angelic voice that hasn’t lost any of its beauty since the ’90s, and her technique is every bit as sound. The NSO served its function admirably here, supporting Sarah — and her voice — as the star attraction. It was an excellent pairing, and, for those who remained conscious, a great concert.