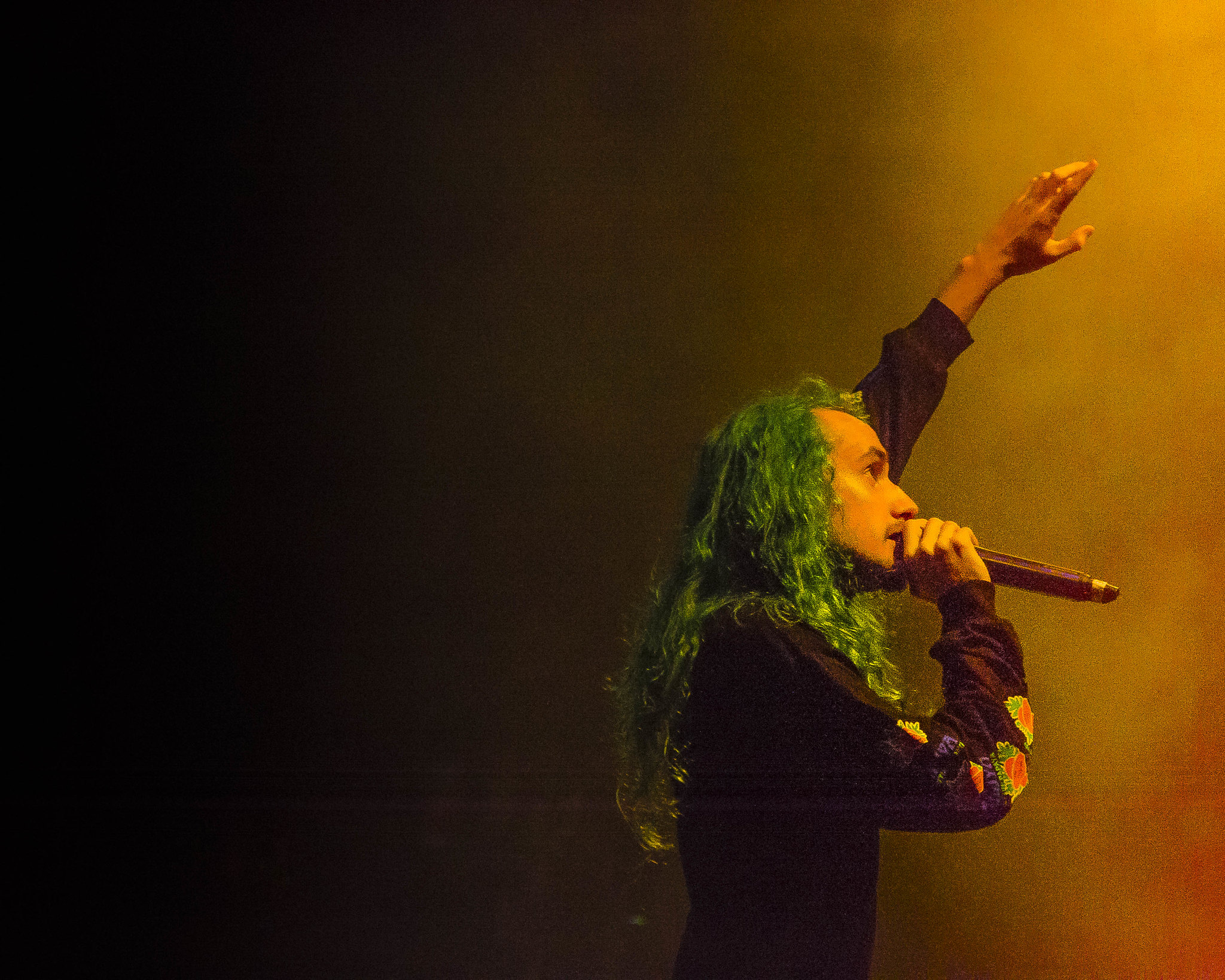 Pouya performs at The Fillmore Silver Spring on Aug. 10, 2019. (Photo by @Waufflez – wauffleznotwaffles.com)

The self proclaimed Underground Underdog, Pouya tore through The Fillmore Silver Spring last weekend for one of the final stops on his Liquid Sunshine Tour with his Buffet Boys groupmates Boobie Lootaveli and Ramirez supporting.

On Aug. 10, Pouya started the show with sound of a heartrate monitor going flat as the surgery scene from his “Superman Is Dead” video played on stage before getting into the song itself. Next he turned things up getting into the oldie but goodie “Middle of the Mall” before smoothing things back out performing “Daddy Issues.”

He kept the crowd on edge all night with this back and forth between slower more somber songs like “Runnin’ Thru the 7th with My Woadies” or “Mood Swing Misery” and straight up mosh pit music like “Bulletproof Shower Cap” and “Cyanide.”

Boobie Lootaveli and Ramirez both came back out after opening and rocked with Pouya the whole show, performing “Liquid Sunshine” (which the tour is named after) and “Sit Ups” off Pouya and Boobie’s EP Greatest Hits Vol. 3 from earlier this year.

The highlight of the show was when Pouya called for the crowd to make a circle pit before dropping “$outh $ide Suicide” off his 2015 joint EP with the Suicide Boys of the same name. You could feel the wind coming from the swirling pit of people like a ceiling fan.

Pouya kept things rolling from there with the first song I ever heard from him, “Energy,” then he put things over the top with his most popular song “Suicidal Thoughts in the Back of the Cadillac” and closed the show with the single “Void” off his latest album “The South Got Something to Say,” before coming back out and doing three more songs.

In a 2018 interview with 88 Rising, Pouya said his, two favorite groups of all time are Outkast and Bone Thugs-N-Harmony and the influence of both groups was easy to hear throughout Pouya’s discography with his use of creative wordplay along with double and triple timed flows. The album title The South Got Something to Say comes from a popular quote taken from Outkast’s acceptance speech after winning Best New Group at the 1995 Source Awards (the first group that wasn’t New York or Los Angeles based to do so).

The Liquid Sunshine Tour has ended now but you can stream the album The South Has Something to Say by Pouya everywhere right now.

Listen to The South Has Something to Say by Pouya on Soundcloud:

Below are some photos of Pouya performing at The Fillmore Silver Spring on Aug. 10, 2019. All photos copyright and courtesy of AJ Waugh (@Waufflez – wauffleznotwaffles.com).