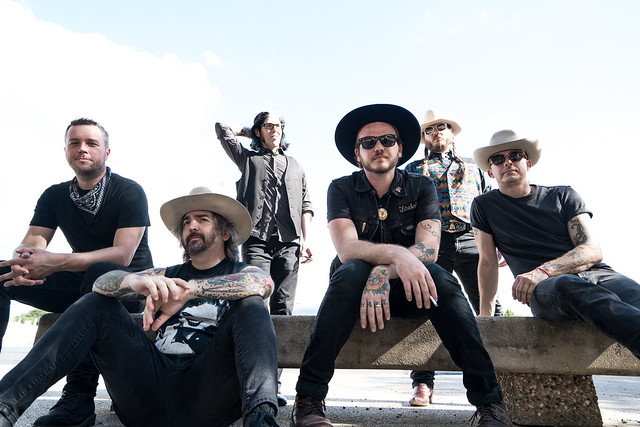 The Vandoliers recently released a new album, Forever, via Bloodshot Records, and the band appears at Pie Shop on Tuesday, Aug. 20, to play their new songs.

The Vandoliers are the next wave of Texas music. The six-piece Dallas-Fort Worth group channels all that makes this vast state unique: tradition, modernity, audacity, and grit.

Produced and recorded by Adam Hill (Low Cut Connie, The Bo-Keys, Deer Tick, Don Bryant, Zeshan B) at American Recording Studios in Memphis, the band’s third album (and first with Bloodshot) Forever is a mix of defiant punk, rugged Red Dirt country, and vibrant Tejano. The full-length’s 10 songs blend emblematic rock ‘n’ roll with bold horns, violin, and a slather of twang reflecting where the band is from, where they’ve been and, eventually, where they’ll be headed. It’s regional and universal all the same.

Watch the official music video for “Sixteen Years” by the Vandoliers on YouTube:

In a review for PopMatters, Elisabeth Woronzoff calls Vandoliers frontman Joshua Fleming’s grasp of the synergies between punk and country “invigorating.”

“After watching episodes of the Marty Stuart Show, Fleming noticed parallels between the punk and country ethos. Hence, Forever, and the Vandoliers, are emblematic of Fleming’s realization. Forever’s primary idea isn’t new, however. Cowpunk, a punk rock subgenre utilizing a country sound and aesthetic, started in England during the 1970s. While Social Distortion, Meat Puppets, and the Reverend Horton Heat brought the genre a wider stateside fan base. Coming off this foundation, Forever is an inspired jolt carving a unique musical space for Vandoliers,” Elisabeth said.