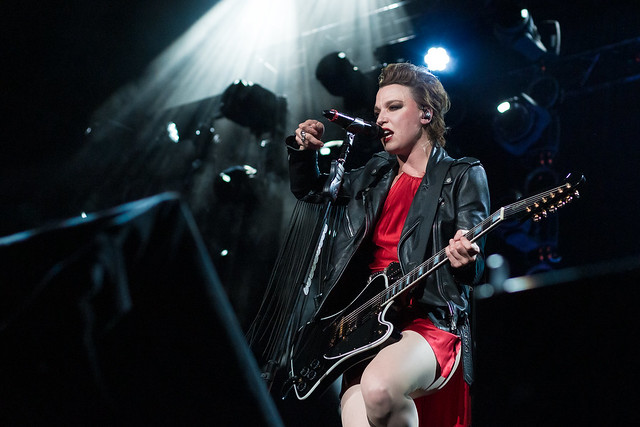 There’s something special about watching Halestorm perform in the middle of an actual storm. Winds blew rain deep into the covered seating area while lightning lit up the skies surrounding the venue, seemingly in tandem with the show’s light sequence. Real thunder wasn’t audible over lead singer and rhythm guitarist Lzzy Hale’s belts and roaring instrumentals, which were thunderous on their own — in a good way.

Halestorm performed at Jiffy Lube Live with Alice Cooper and support by Motionless in White on Aug 13. In between songs, Lzzy said that she brought an Alice Cooper CD to a slumber party as a child, which wasn’t received so well. She realized that she was different, but she embraced her “weirdness” and encouraged the audience to do the same. Halestorm also consists of drummer and Lzzy’s brother Arejay Hale, guitarist Joe Hottinger, and bassist Josh Smith. The band’s latest album, Vicious, came out in 2018 and the single “Uncomfortable” was nominated for a Grammy.

Watch the official music video for “Uncomfortable” by Halestorm on YouTube:

While Lzzy is known for her vocal power, the other band members’ skills would be absurd to ignore. After “Amen,” Josh, Lzzy, and Joe played solos as a spotlight focused on them one by one before the whole band played an instrumental together. A highlight of the show was a little later during Arejay’s solo, where he introduced a young boy from the audience named Maxwell. The two had a mini-jam session at the drum set, then the rest of the band came back out on stage and fittingly played “Freak Like Me.” A quick scan through Halestorm’s lyrics would reveal quite a bit of mature content, but the band members themselves always welcome all fans, called “freaks,” no matter their age.

Halestorm closed their set with their most popular song to date, “I Miss the Misery.” They extended the song’s outro with more instrumentals and solos. At last, Lzzy sang “I don’t miss you I miss the misery for a final time.” The rain was still coming down outside, and the screens in the venue issued a storm advisory — a message equally applicable to the weather and the band that had just played.

Lzzy and Halestorm weren’t done for the night though, and Lzzy, Arejay, and Joe came back out during Alice’s encore along with Motionless in White singer Chris Motionless for a very theatrical performance of “School’s Out” together. The rain had cleared, shiny confetti flying through the air, and the smiles on the band members’ faces as they took their bows made high spirits — despite the horror themed set design — inevitable.

Here are some pictures of Halestorm performing at Jiffy Lube Live on Aug. 13, 2019. All photos copyright and courtesy of Angel Kim.