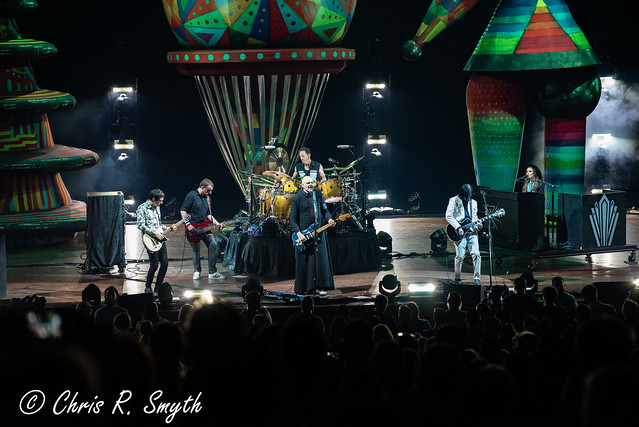 “Making teenagers depressed is like shooting fish in a barrel.”- Bart Simpson, 1996.

In the 23 years since The Simpsons took their playful shot at The Smashing Pumpkins’ music, those “depressed teens” have grown into adults who now have a whole new list of issues causing their anxiety. Their worries about the SATs, school bullies, annoying parents, and a bleak view for the world’s future have become fears of paying bills, a government they don’t trust, kids who won’t listen, and a bleak view of the world as it is today.

Many of those people made their way to Merriweather Post Pavilion on Aug. 17 to witness the headlining set from The Smashing Pumpkins.  Touring in support of their verbosely titled 2018 album, Shiny and Oh So Bright, Vol. 1/LP: No Past, No Future, No Sun, The Smashing Pumpkins performed in front of three larger than life, psychedelic-looking robots, and for a crowd ravenous for the rock and roll of their youth. With lead singer Billy Corgan, guitarist James Iha, and drummer Jimmy Chamberlin, three of the four original “Pumpkins” all back in the band, the fans were witnesses to a reunion they had waited many years to see.

Stream Shiny And Oh So Bright, Vol. 1/LP: No Past, No Future, No Sun by The Smashing Pumpkins on Spotify:

The playing of “Today” opened the show on a high. “Zero” and “Bullet With Butterfly Wings,” and their highly distorted guitars, had everyone embracing their own melancholy and infinite sadness.

The Pumpkins managed to fit in songs from across their large catalog of albums, from “Cherub Rock” off 1993’s Siamese Dream, to “Ava Adore” from Adore, to “Solara” and “Knights of Malta” off last year’s effort.

When The Smashing Pumpkins first came on the scene in the early ’90s, they were often labeled as part of the grunge music scene. It was a label that never totally fit as songs like “1979” and “Disarm” felt too soft for that genre. “Tonight, Tonight,” which has a symphonic feeling due to the use of violins in the song, is decidedly not grunge. When performed live, the stage was aglow with purple and blue lights while white dots speckled the background. The look of the stage felt very much like the night sky, and hearkened back to the song’s famous video of a couple who flew through space and fought off aliens after crashing onto a foreign planet.

With a long keyboard intro, and choosing not to swap out their electric guitars for acoustic, the band later put their own unique twist on James Taylor’s classic, “Fire and Rain.”

While the lyrics of many of The Smashing Pumpkins’ music may be gloomy, the atmosphere inside Merriweather Post Pavilion was anything but. The feeling of depression was not the least bit noticeable. Instead, there was a general sense of community, and a feeling of joy and appreciation from everyone who got to spend a Saturday night with a great rock band.

Here are some photos of The Smashing Pumpkins performing at Merriweather Post Pavilion on Aug. 17, 2019. All photos copyright and courtesy of Chris Smyth. 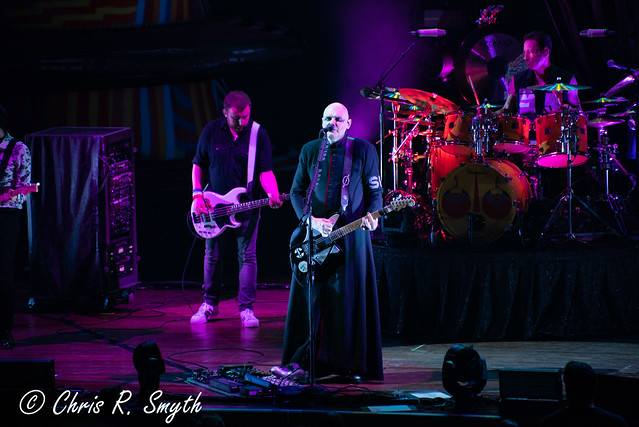 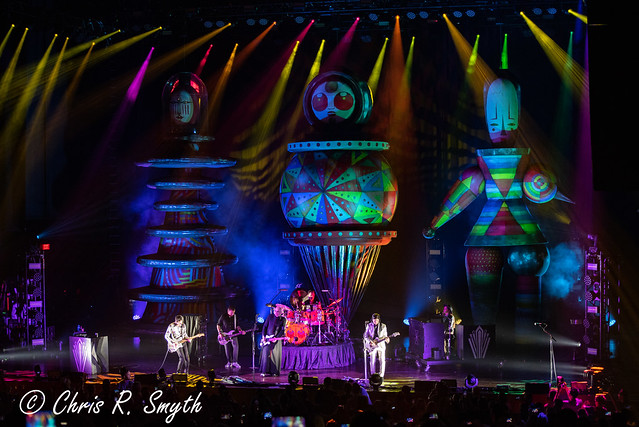 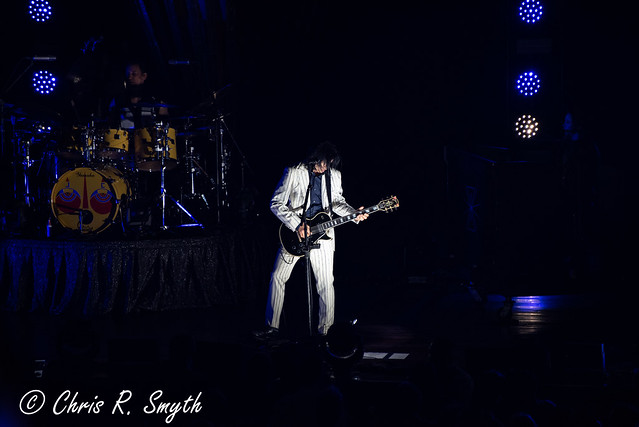 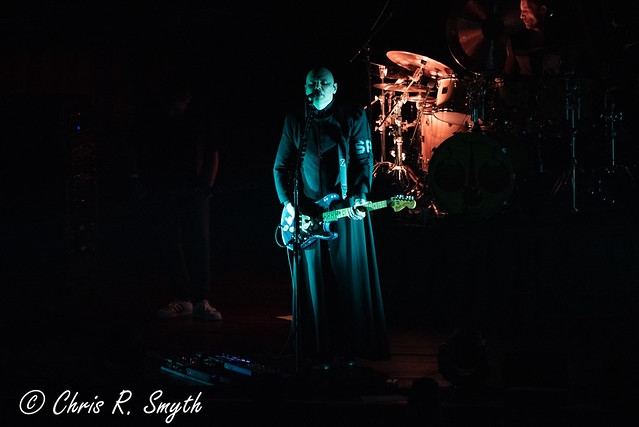 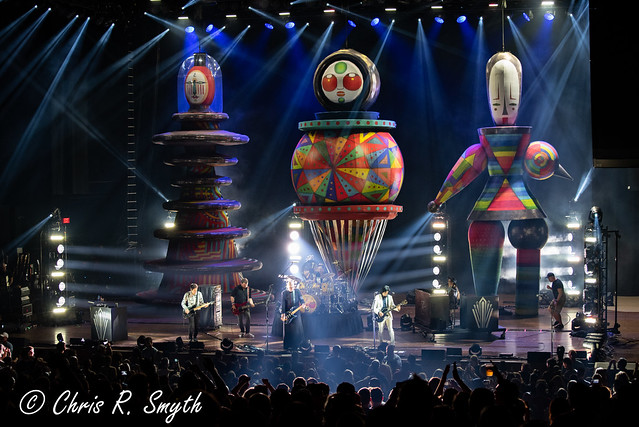 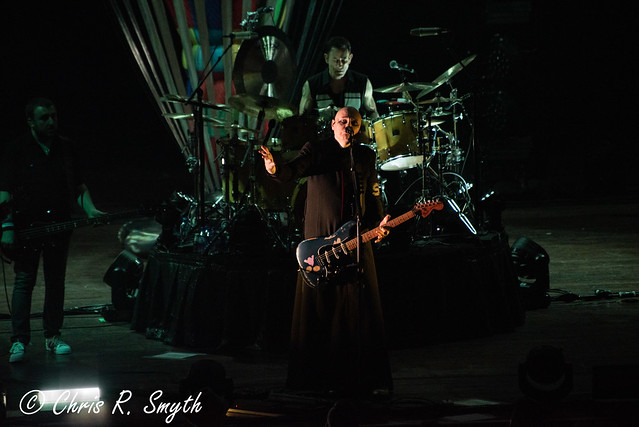 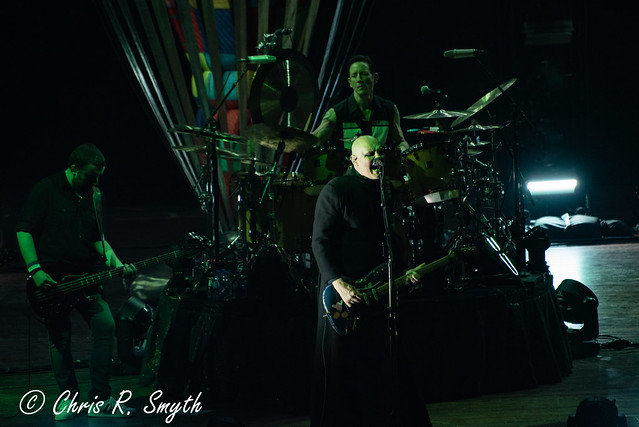 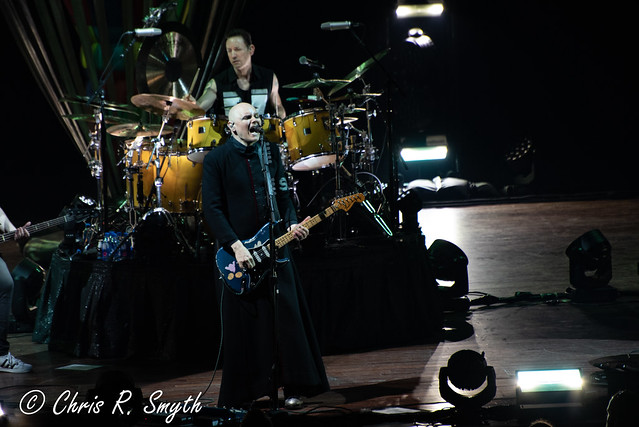 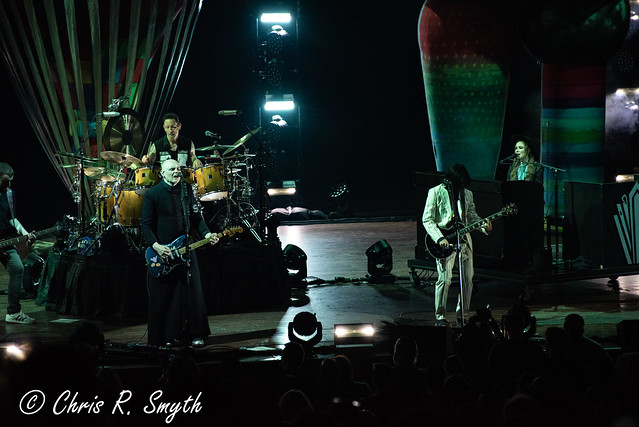 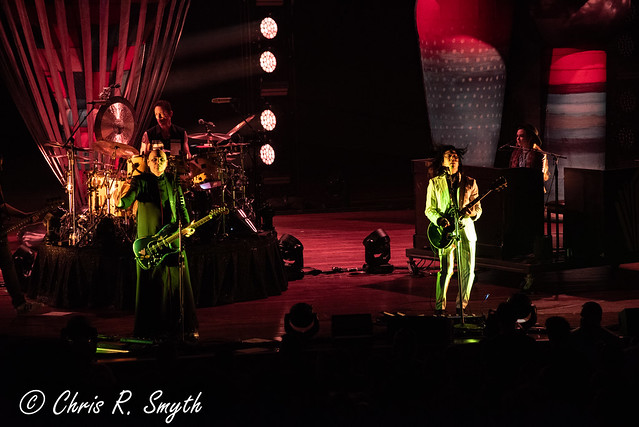 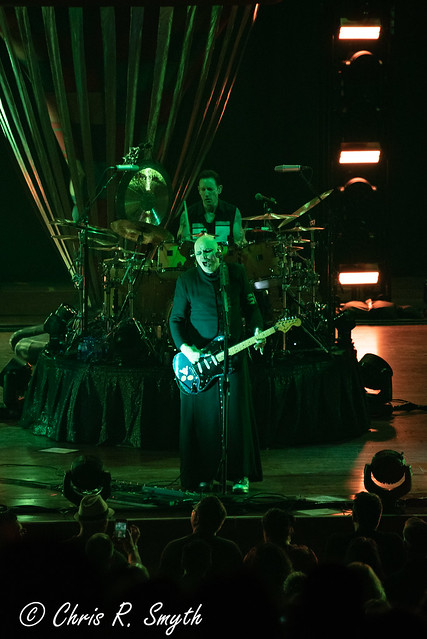 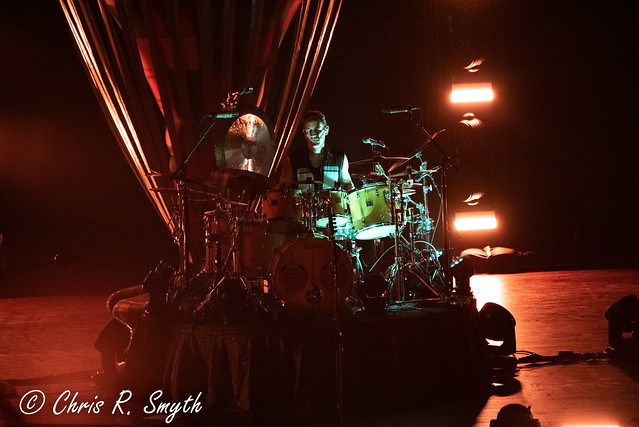 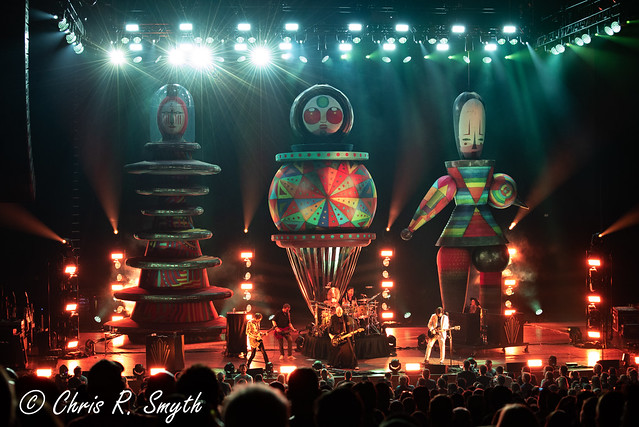 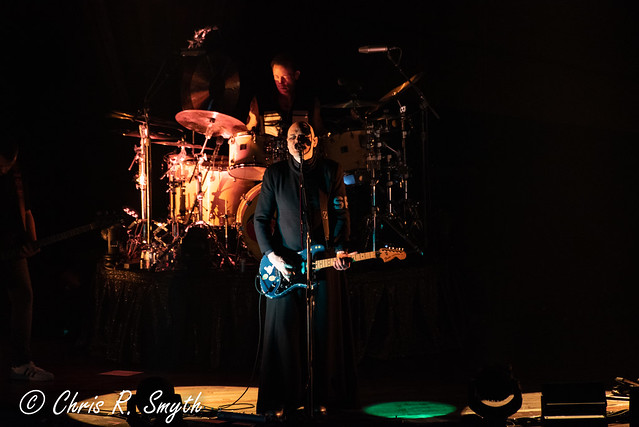 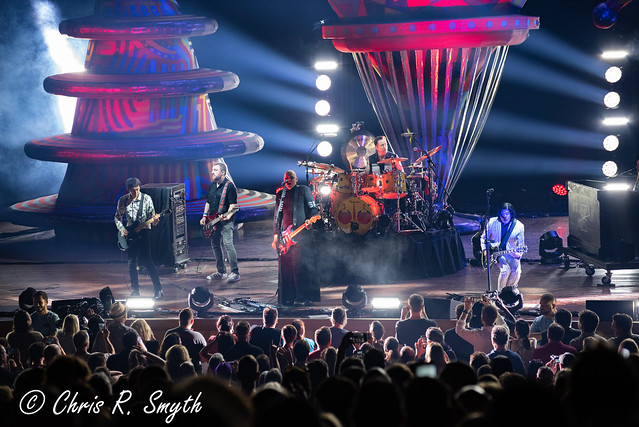 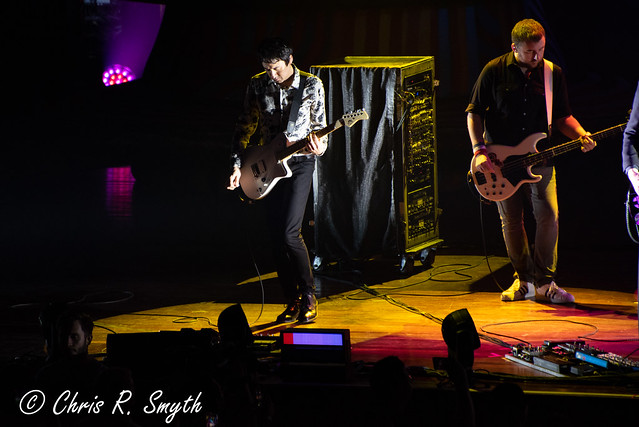 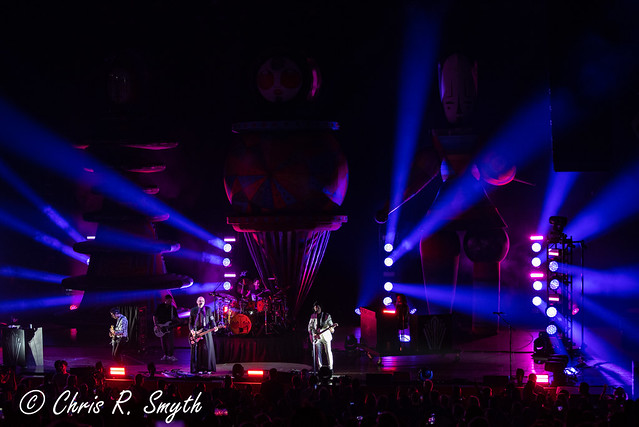 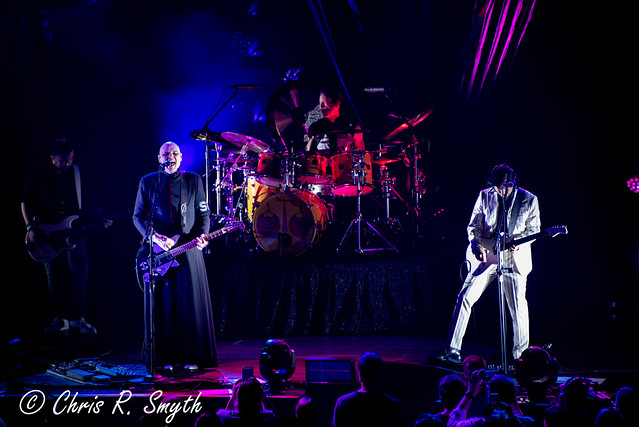 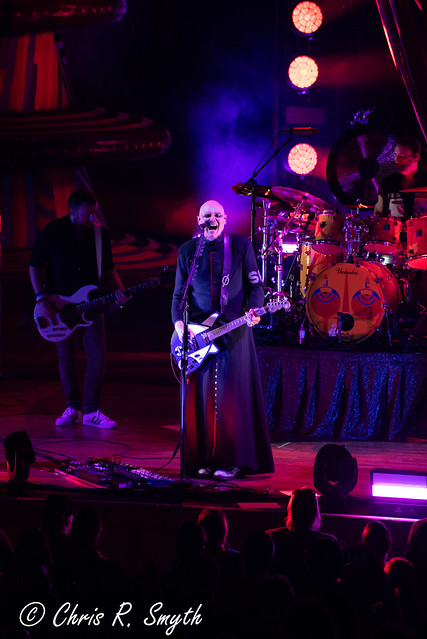 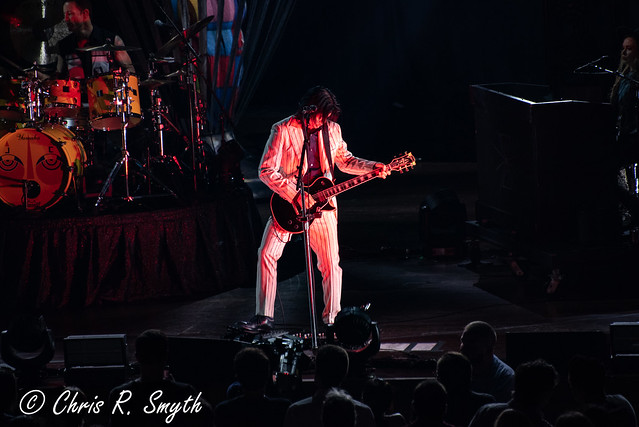 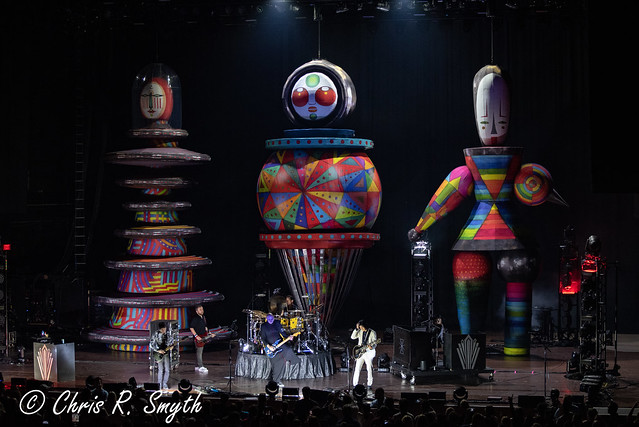 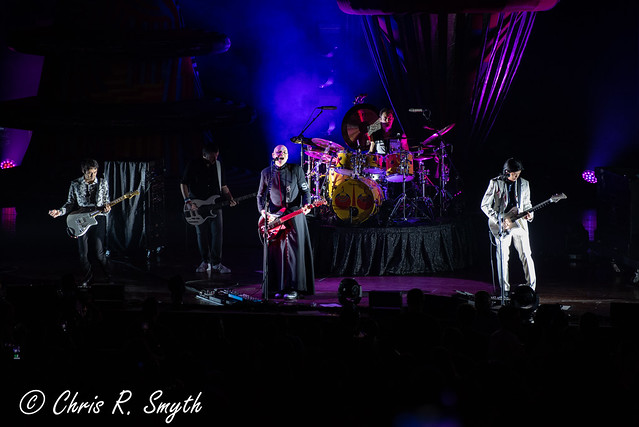