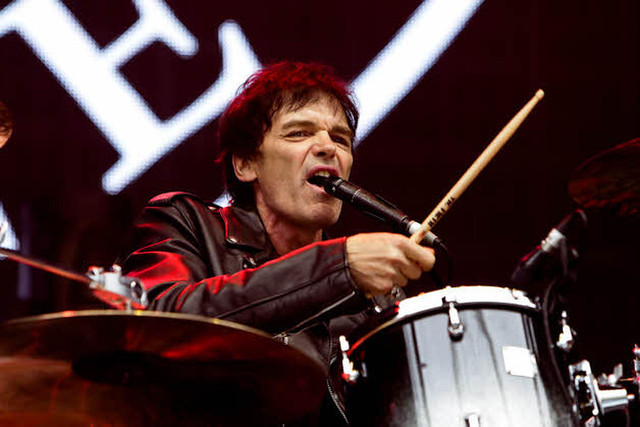 Richie Ramone is the fastest, most powerful drummer who ever played with the legendary punk rock band the Ramones. He joined the Ramones in 1983 and first appeared with the band on their Subterranean Jungle Tour.

One of the few surviving Ramones today, Richie is on tour again with a show at Slash Run in DC on Monday, Sept. 9!

Richie is notable as the only Ramones drummer to sing lead vocals on Ramones songs, “(You) Can’t Say Anything Nice” as well as the unreleased “Elevator Operator.” Richie was also the only drummer to be the sole composer of Ramones songs, including their hit “Somebody Put Something in My Drink,” which remained a staple in the Ramones set list until their last show in 1996 and continues to be covered by new generations of bands worldwide. Richie also wrote “I’m Not Jesus,” “Can’t Say Anything Nice,” “I Know Better Now,” “Humankind,” and “Smash You.”

Watch “I Fix This” by Richie Ramone filmed for BlankTV.com on YouTube:

ArtRocker reviewed a show by Richie in 2016 and thoroughly enjoyed every minute.

“The band hit their peak on the first song and this continued throughout with every song being a total victory, from classics like ‘I Just Wanna Have Something to Do’ and ‘Blitzkrieg Bop’ to ‘I’m Not Jesus’ and ‘Cretin Hop’ which was one of the encore songs. The band collectively were tight and solid playing with the zest and passion you would expect when on stage with Richie. Richie sang throughout the night interchanging between his drumming and being up front singing lead vocals and the energy Richie put into the night was tangible, you could see the audience loved every minute,” the review said.

Also, last year, Richie published his autobiography, I Know Better Now: My Life Before, During and After the Ramones, (written with Peter Aaron). Richie will have copies on hand to sign at Slash Run. The book includes a photo of the Ramones from 1983 by our own Chester Simpson!