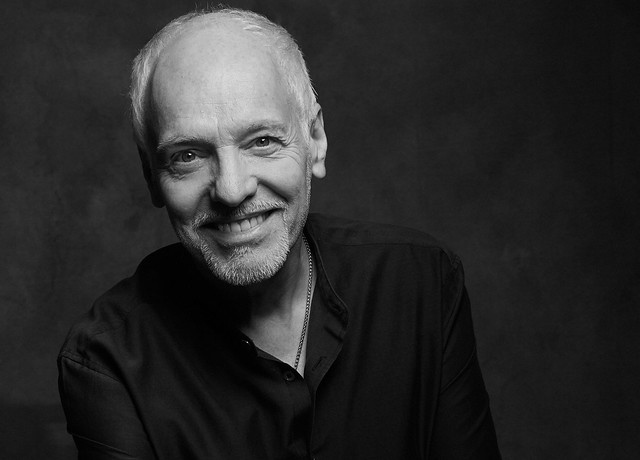 “Breaking All the Rules,” “Show Me the Way,” “Baby, I Love Your Way,” “Do You Feel Like We Do” — classic rock hits. And one man is responsible for them — Frampton. Peter Frampton.

The guitar legend is traveling on his final tour with a stop at The Anthem on Wednesday, Sept. 11.

At age 16, Peter was lead singer and guitarist for British band The Herd. At 18, he co-founded one of the first supergroups, seminal rock act Humble Pie. His session work includes collaborations with such legendary artists as George Harrison, Harry Nilsson, David Bowie, Jerry Lee Lewis, Ringo Starr, John Entwistle, Mike McCready, and Matt Cameron (Pearl Jam), among many others.

In 2007, he won the Grammy Award for Best Pop Instrumental Album for Fingerprints — and in 2014, he was inducted into the Musicians Hall of Fame.

This year, Peter released All Blues, his first ever blues album, with the Peter Frampton Band. All Blues debuted at #1 on the Billboard Blues Albums chart and held that position for six weeks. All Blues was recorded with Peter’s longtime touring band: Adam Lester (guitar/vocals), Rob Arthur (keyboards/ guitar/vocals), and Dan Wojciechowski (drums).

Peter is in the midst of his Peter Frampton Finale: The Farewell Tour, presented by SiriusXM and produced by Live Nation. The show has been met with rave reviews across the country. The Philadelphia Inquirer said, “[it’s] a show so triumphant and buoyant you could hardly believe this guy had anything more than a cold… for something billed as a finale, it sounded as if Frampton was just getting started,” while Tulsa World said, “he is more alive and no less a guitar ninja than ever before… Frampton is literally going out on top.”