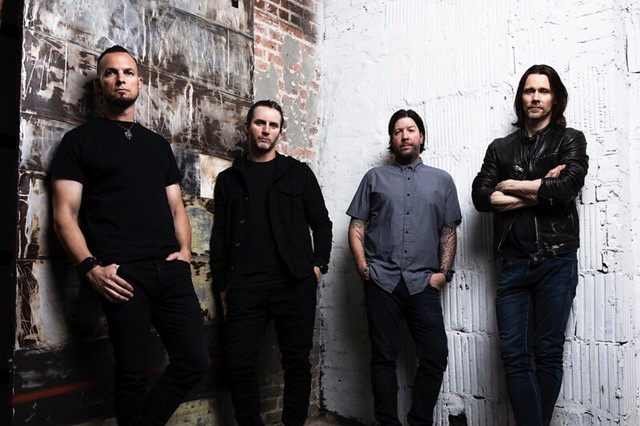 In October, Alter Bridge releases Walk the Sky, the band’s sixth studio album, via Napalm Records. In the lead up to that release, Alter Bridge are now on tour with Skillet, and the bands appear together at MECU Pavilion on Sunday, Sept. 22, for their Victorious Sky Tour.

For over 15 years, Alter Bridge has been a band known for blurring the line between hard rock and heavy metal. Recorded in a way never done before, the new album was born from complete song ideas created by Myles Kennedy and Mark Tremonti. These songs would then be worked on by the entire band to create the 14 songs that would make Walk the Sky the listening experience it is. This varies from the band’s previous method going back to their sophomore release Blackbird, where Myles and Mark would combine individual ideas and riffs alongside producer Michael “Elvis” Baskette to form some of the band’s most revered songs.

Watch the official music video for “In the Deep” by Alter Bridge on YouTube:

Alter Bridge burst onto the music scene in 2004 with the release of their gold-selling debut, One Day Remains. In 2007, the band released Blackbird, the album that elevated the band’s profile worldwide. The epic solo in the title track “Blackbird” was voted “Greatest Guitar Solo Of All Time” by Guitarist Magazine. ABIII was released in 2010 and the single “Isolation” gave the band their first #1 single.

In 2013, the band reached an elevated creative and critical plateau with Fortress. It bowed at #12 on the Billboard Top 200, moving over 30,000 copies first-week and earning unanimous tastemaker praise. The record garnered perfect scores from Total Guitar and KERRANG! as well as acclaim from Billboard, The Guardian, Loudwire, Ultimate Guitar, and many more. In between sold-out tours in Europe and North America, the guys appeared on VH1 and graced the cover of Classic Rock Magazine who labeled Fortress, “The best thing they’ve ever done,” while Eddie Trunk called it, “A top 10 album of the last 10 years.” 2016’s The Last Hero gave the band their first Top 10 album since their debut.

Myles and Mark are joined as always by bassist Brian Marshall and drummer Scott Phillips.