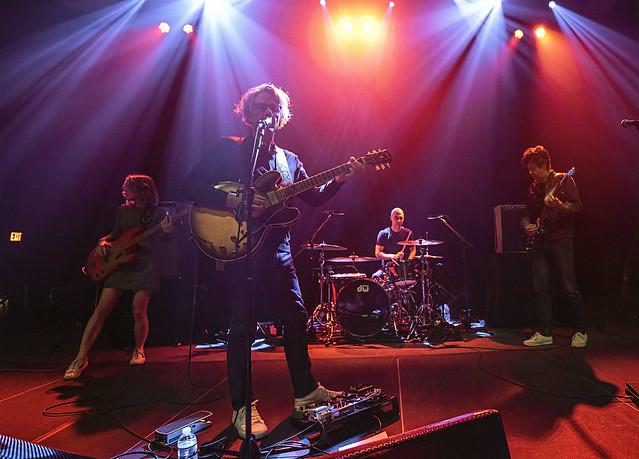 Made up of Dean Wareham (vocals/guitar), Britta Phillips (bass/vocals), Sean Eden (guitar/vocals), and Lee Wall on drums, Luna continue to churn out brilliant pop that goes from dreamy jangle to drone to some great old fashioned rock and roll. Having reformed in 2014 after their 2005 breakup, the band has been going strong with an album, A Sentimental Education, and an EP in 2017  — and a new EP, Postscripts, that was released this month. I had the great fortune to see them on their first tour back together in Chicago a few years back, and it was a thrill to see them again performing one of my favorite albums at the 9:30 Club on Oct. 5.

Stream Penthouse by Luna on Spotify:

There was a pleasant mix of old fans and some, well, very young soon to be fans at the crowded 9:30 Club as shortly into their set, Dean pointed out a few very young audience members at this early set. And they were in for a treat as the band played through favorites like “23 Minutes in Brussels” and “Hedgehog,” which Dean and Sean joked about it being their CD single from the album. And we were treated to the “secret track” on Penthouse, the Serge Gaisbourg song, “Bonnie and Clyde.”

I loved how Dean and Sean traded leads throughout the set — what a thrill to see again. And in addition to the numbers of Penthouse, the band played several other songs, like “Broken Chair” and Malibu Love Nest from their 2005 album Rendezvous as well as fan favorite “Pup Tent” and the Beat Happening song “Indian Summer.”

This was a really fun show, and one that I know has started a few young music lovers on the right path. Luna continues their tour into the Fall. Definitely catch them here.

Here are some more photos of Luna at the 9:30 Club Oct. 5, 2019. All photos copyright and courtesy of David LaMason.