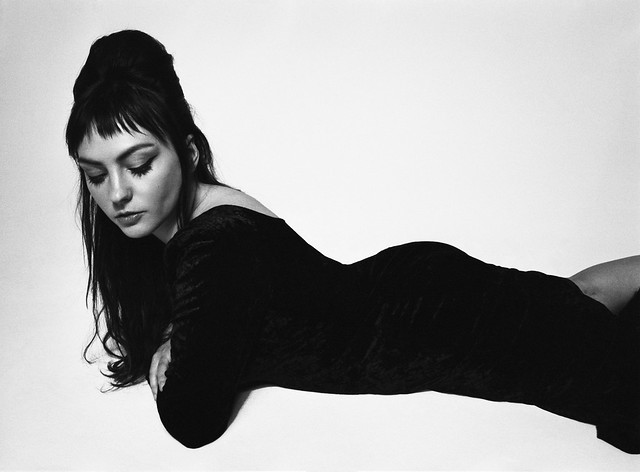 Asked how she was doing Friday night, Angel Olsen replied that she was “a little tired, but trying to rock out now.” She and her band succeeded brilliantly at that with their rendition of her “Special.” Known for her terrific songwriting, Angel’s live show delivered on the jams at the sold-out Lincoln Theater.

In the vein of her new album, All Mirrors, Angel’s band included a string section (violin and cello), allowing them to play majestic orchestral arrangements that “sound epic,” as she told an interviewer.

Before the song on Nov. 1, Angel engaged the crowd, asking if it was anyone’s birthday. Met with silence, she remarked, “I’ll take that as a ‘no.’” Afterwards, someone shouted “I think I need a cigarette!” Angel promptly quipped, “You’re gonna miss some stuff, but go ahead.”

The Asheville-by-way-of-St. Louis singer-songwriter opened her set with several songs from All Mirrors. Bathed in pink lights — the lighting for this show was exceptional — Angel played “New Love Cassette.” Moving to the Hammond organ, she followed up with the title track, before telling that audience that Halloween, the previous evening, “was such a nice night,” and she was having “a little bit of a rough day.”

She might have been having a rough day, but Angel’s performance still sizzled. The droning guitars on “Impasse” created a heavy, almost gothic sound. This contrasted with the frenetic intensity of “Shut Up Kiss Me” and the Morricone-influenced guitar rhythms of “Sweet Dreams” later in the set; Angel drew from a varied sonic palette. She displayed her prowess as a multi-instrumentalist, switching between the Hammond, as on “Spring,” and a big, slick-looking, white electric guitar. At other times — her opening number, for starters — she only performed vocals.

All Mirrors has already made quite the impression on Angel’s fans. They applauded when the band started playing “Lark.” In an interview with Pitchfork, she explained that the song, which she started writing before her 2016 album My Woman, “is about verbal abuse and people saying they support me, especially men in my life.”

Stream All Mirrors by Angel Olsen on Spotify:

Between songs, Angel told the audience, “We’re just getting started.”

“It’s hard,” she said, “writing different kinds of songs and putting them together for a set.” Her announcement that “we’re going to play some old songs tonight” was immediately met with a shouted request. “I’d play that one,” Angel responded, “but I didn’t rehearse it.”

Before she moved on to old songs, Angel played “Summer,” which she’s described as “like waking up in the morning after a bad week, and suddenly you’re fine and ready for anything.” She if everyone was comfortable sitting down. Someone bellowed a negative response, and Angel invited them to come up in front of the stage and dance. “Tonight,” which followed, forms the centerpiece of All Mirrors.

After the intense, passionate “Shut Up Kiss Me,” Angel went with a more tender ballad, “Acrobat.” The band left the stage then, leaving Angel to do a couple songs solo. For the first time, she played “Pops” on the Hammond, finishing her set with “Tougher Than the Rest” on guitar.

A standing ovation brought Angel and her band back to the stage to play “Choices.” Angel’s performance reflected detailed planning and preparation. The intense, spectacular lightshow that accompanied the music requires careful, precise timing, and doesn’t allow for the artist to deviate from the setlist. This took nothing away from show’s emotional impact, which can sometimes be choked by rigidity. The transitions went smoothly, Angel’s lighting quick rapier wit added a dash of spontaneity to the show.

If Saturday’s concert matched Friday’s, the audience got one heck of a show.

For more Angel Olsen, including tour dates, visit her website.