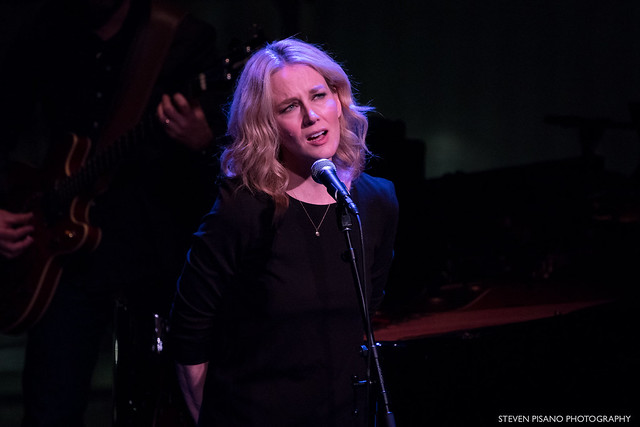 Allison Moorer has written a new book, Blood, and released a new companion album of the same title. The book and album are a meditation on coming terms with her family legacy: In 1986, when she was 14, following a long history of abuse, her father shot her mother, then turned the gun on himself. Her sister, fellow musician Shelby Lynne, was 17.

Melissa Block, special correspondent at NPR, moderated a discussion with Allison about the book and album at Jammin’ Java recently.

While it might seem natural for a musician to record an album to accompany a memoir, Allison told the audience that it didn’t come to her until late in the process. Writing her memoir, she said, took four years and getting a graduate degree (she received an MFA in creative nonfiction from The New School in New York City). Allison described herself as “not a marketing person.”

As tragic as her family’s story is, Allison has found positive, beautiful elements to it, especially the musical heritage she came by through both of her parents. The Nov. 15 event began with a 1975 recording, made when Allison was only three, of her singing with her sister. When Allison was 13, her family went to Nashville to record a 45. Alison said that this didn’t faze her; it seemed like a normal thing, something that “all families” did. Shelby Lynne, who was determined to become a singer from a young age, was much more excited about it.

Allison’s grandmother was one of 19 children, growing up in rural poverty, picking cotton. As they worked the fields, they would sing to pass the time. When Allison was growing up, her grandmother and her siblings would hold “fiddlin’s” on Fridays and Saturday. One of Allison’s treasured memories was of hiding under the piano while this group was practicing, then popping up and singing her heart out for a few bars.

Allison’s father desperately wanted to be a professional musician, and that could bring out his darker side. She described her father as “very frustrated.” Living in a dry county forced him to travel to play even the most local of bar gigs. He would come home drunk very, very late (or very, very early).

At Melissa’s prompting, Alison read an excerpt from early in her book describing the morning she lost her parents.

She discussed struggling with how to begin the book. Allison told Melissa that she followed the advice of Pulitzer Prize-winning writer Annie Dillard in getting the ugly, negative matters up front.

Allison says in her book that she has “nothing but love” for her father now. But, as Melissa pressed her, her emotions were complicated. Allison replied that “love is complicated.” Her love for her father is bound up with anger; she read a section of the book that lists the things she would say to her father if she could talk to him.
The discussion between Melissa and Allison was punctuated by songs. Allison played “Moonlight,” as well as “A Thunderstorm/A Hurricane,” which she described as a writing exercise that combined “Picasso’s paintings, Joan Didion’s prose, and my sister,” and “The Rock and The Hill.” For Blood, she recorded one of her father’s songs, “I’m the One to Blame.”

After an about an hour of conversation, Melissa left the stage, and Alison played several more songs. Some were from the new album — “Set My Soul Free,” “All I Wanted (Thanks Anyway),” and the title track, “Blood” — while others came from her lengthy but still young career. The audience applauded when she began playing “Alabama Song,” and they had a similar response for “A Soft Place to Fall.”

When she thought she had finished Blood, Allison was struck one day with the word “Heal,” breaking into tears. While she had solely authored the songs on the album (except her father’s), she asked her friend and Grammy nominee Mary Gauthier to help write the coda.

A standing ovation followed “Heal,” and, after a quick break, Allison came out, holding her friends with her new spouse, Hayes Carll. She patiently met with and signed books and other merchandise for a long line of eager fans.

Allison’s new book, Blood, is available now from Da Capo Press. The companion album, on Autotelic/Thirty Tigers, can be purchased or streamed on major platforms.