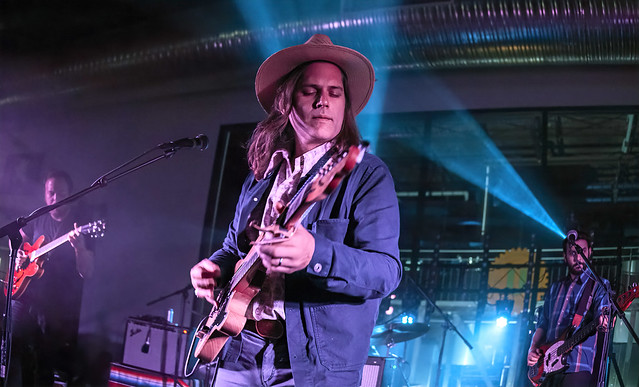 There’s a comfort to the Fruit Bats’ music. Eric D. Johnson writes songs that seem to glide from over the hills from the West Coast to this year’s fantastic Gold Past Life on the band’s new label, Merge Records.

Created in the late ’90s as a four-track recording project of Johnson, Fruit Bats has incorporated sounds of folk (Johnson once taught at Chicago’s Old Town School of Folk Music), 1970s-era AM pop, country, and even a bit of disco thrown in for good measure. And that’s not to say they don’t rock! Fruit Bats put on one fun show. The last time I saw Eric and company was a couple of years back, but at Union Craft Brewing on Nov. 23 was the first time I’d seen them in a venue this big.

Union Craft Brewing, a Baltimore brewery founded in 2011, hosts a large space for events, but it’s only recently that they’ve hosted shows. And, I for one, hope to see more in this space soon as there was plenty of space for a few hundred fans in this space along with food and, of course, beer.

Opening the show was Andy Stack whose solo project Joyero saw the release of his debut LP, Release the Dogs, this year. Andy is one half of the band, Wye Oak, which began its journey in Baltimore, so Saturday was a sort of homecoming for him as he performed completely alone, looping saxophone, guitar, and drum effects to create rich songs.

Eric and the band took the stage to a packed house and started off with “Cazadera” off the new album, a slow but beautiful start to set. But things started warming up quickly as they moved into “Gold Past Life,” which reminded me a bit of the Bee Gees and a tad of Paul McCartney. One of the things I love about the Fruit Bats is this groove they create that’s hard to pull back from. “My Sweet Midwest” is a perfect example as Eric and guitarist, Josh Mease, pulled off a ripping solo on top of the steady rhythm.

The opening thump, thump of “Your Dead Grandfather” got the crowd clapping along while an extended jam turned into the slow disco shake of “You’re Too Weird” from the Tripper LP. And as the evening drew to a close, the band played the fantastic new single, “Drawn Away” from Gold Past Life and finished the set with the fan favorite, “When You Love Somebody.”

Stream Gold Past Life by Fruit Bats on Spotify:

As the rain started to pour outside the band returned for an encore that included “A Lingering Love” — a great end to an equally great evening.

Although Fruit Bats wrap up their tour in December. Definitely check them out here.

Here are some more photos of Fruit Bats performing at Union Craft Brewing on Saturday, Nov. 23, 2019. All photos courtesy and copyright David LaMason.