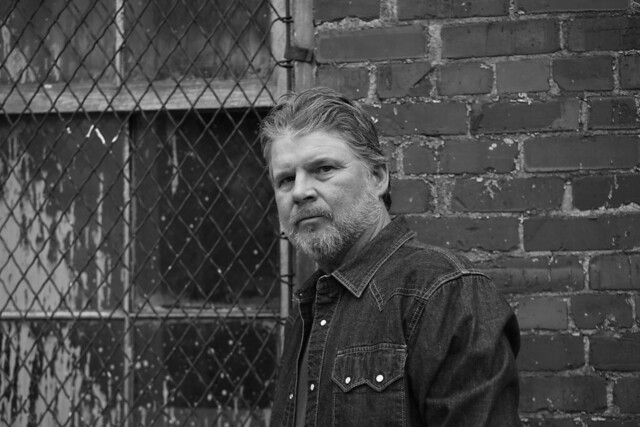 Slaughters, Kentucky native Chris Knight makes gritty, powerful country music. Eschewing the country pop of the Nashville machine, he records sparsely produced albums that draw the listener’s attention to his compelling lyrics. Live, he performs solo and acoustic, delivering the lyrics with fittingly gruff vocals, as he did at City Winery DC recently.

This month, Chris released a new album this month, Almost Daylight. The nine original tracks, plus covers of John Prine and Johnny Cash, turned up the electric guitars, moving Chris’s sound more toward rock than previous releases. “I Am William Callahan” looked back at the life of man who traveled all over America. In “I Won’t Look Back,” a man who just can’t get it together took an honest look at his situation and how he got there. “Send It On Down” eloquently captured the desperation of being trapped in your hometown: “I need some help getting out of this town / Are there any answers / I’d sure like to hear one.”

Chris’s songs tell real stories about working-class life, songs about struggling to make ends meet and songs about lives lived on the edge. He opened his set with “Rural Routes,” singing of how “There ain’t much of nothin’ left, this place where I became myself / Ghosts and memories.” “Becky’s Bible” turned the celebration of the outlaw on its head. The narrator described his regret and fear of consequences as he flees the scene after having shot a man over a card game.

Chris attracted a rowdy crowd who hooted, hollered, and made their opinions known. After “Send It On Down,” someone suggested that Chris burn his guitar on stage. “Might become part of my show,” he replied, taking it in good stride. He then proceeded to catalogue all the abuse he has heaped on his guitar over the years. Later, after “I Won’t Look Back,” he told the audience, “This guitar’s still in rehab.”

Chris talked about growing up in a dry county. His town had two bootleggers, one named Gilbert. Gilbert would sell you beer — but not until you were 13. “If he thought you was 12,” Chris said, “he wouldn’t sell you no beer.” With his two daughters, who were 12 and 13 when Chris became a customer, he had the whole operation in a tidy set-up, even had a walk-through window. Gilbert didn’t have the best prices, though: 30 miles down the road, there was cheaper beer to be found.

When he was 15 or 16, one day a friend’s father hired Chris and his friend to do some yard work. He had an oil tank on the property. “I don’t know why’d you burn shit around an oil tank,” but he did, and, sure enough, he started a fire. Chris and his friend beat the fire out with their t-shirts, after they wet them in a nearby pond. The $20 bill each earned went right to Gilbert.

There’s a lot to admire about Chris that’s missing from the mainstream country that makes it on the radio. There’s a weight, a gravity to his songs, a depiction of real problems faced by real people. Chris doesn’t shy away from hard truths. And there’s a level of songcraft here that’s just a lot higher than most of what’s out there, that comes from being a serious student of writers like Prine and Cash.