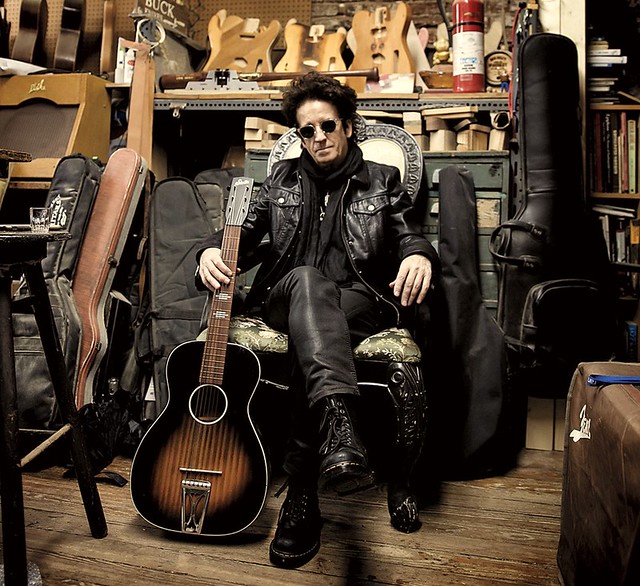 Some musicians find their desire to make art stifled. Following a contract dispute with his original record label, Willie Nile spent a couple decades working, as he said, “a day job.” But Willie, who comes from a family of musicians — his uncles worked in vaudeville — never gave up on his dreams. He kept writing songs, and would occasionally perform on the East Coast and in Europe.

One of those songs he wrote during his time mostly away from music was “Beautiful Wreck of the World.” Written in 1998, he updated some of the references when he performed it with his band at Jammin’ Java on Nov. 24. He replaced “Madonna Ciccone” with “Kellyanne Conway,” and he sang, “Melania Trump will make love to me.” Willie also mentioned that he had just played two shows in New York that marked the 20th anniversary of the album.

Stream Beautiful Wreck of the World by Willie Nile on Spotify:

The clock had reached 9pm when Willie wrapped up “Beautiful Wreck” — time to call his father, who just turned 102 last week. At 102, his father still lives independently, though Willie’s brother recently moved in. When he didn’t pick up the phone, Willie said that he’d probably fallen asleep in front of the TV. Willie tried reaching his brother, who didn’t answer either.

In 2006, Willie made a huge comeback with the record Streets of New York, a tribute to his adopted city. (Willie grew up one of eight children in Buffalo.) The album received outstanding reviews, and sparked a period of creativity that has seen Willie put out a series of regular releases. “Life on Bleecker Street” describes his home in the Greenwich Village nightclub district.

Last year, Willie released the album Children of Paradise. On Sunday, he played the title cut, which is based on a classic French film, as well as “Forever Wild” and “Run.”

Recently, while he was watching TV, a documentary came on about children in Madagascar digging for mica. And by little children, Willie explained, he was talking about 5-year-olds. He described the “50-foot deep pits” that these children would go down into. He dedicated “The Innocent Ones” to them. Taking a left turn, he then played “This Is Our Time” for “all the women in the audience.”

“All Dressed Up and No Place to Go,” Willie told the audience, “is a party song.” The beauty of songwriting, he said, “is that you can write about anything.” Underneath the party song surface here, he was “expressing myself about the planet. The undertone is that the ocean levels are rising.”

Before playing “On the Road to Calvary,” he mentioned that his favorite line from Shakespeare is, “There are more things in heaven and earth than are dreamt of in your philosophy.” Willie received a request for a different song from the friends of a fellow fan who passed away a few months ago, but his substitute guitar player — his regular guy is working on his teaching degree — wasn’t familiar with it. Willie sent this out to the fan’s memory instead.

Former congressman Joe Crowley joined Willie for “Heaven Help the Lonely.” Willie played a show in 1981 at Queens College, where Joe was a student. He also played at Joe’s 50th birthday party, which was attended by Mayor Michael Bloomberg and Speaker of the House Nancy Pelosi. (Pelosi’s favorite song apparently is Don McClean’s “American Pie.”)

Willie ended his set with two covers. First, he played “Sweet Jane” by Lou Reed, who was a friend of his. Then, he finished with Tom Petty’s “Running Down a Dream,” because, as he said, “it’s fun to play.”

For his encore, Willie played “One Guitar,” which is about the power of one person to change the world. To finish the show, he brought out opener Brad Ray and also brought Joe back to the stage. Together, they all paid tribute to Willie’s punk roots with “I Wanna Be Sedated.”

Willie told the audience that one of the best parts of being a musician and traveling is the people he gets to meet. And, having spent time away from the music, he has an added appreciation for getting to pursue his art again. He’s a humble guy who plays down his talents, which are substantial. His joy and enthusiasm for music are obvious and infectious.

For more music by Willie Nile, visit his website.