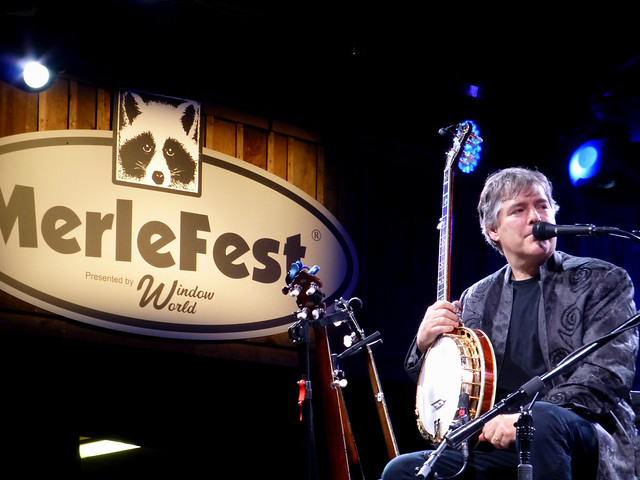 Bela Fleck performs at MerleFest on April 27, 2018. (Photo by cp_thornton)

We all have ideas and preconceptions about different kinds of music. We can’t help it; we’re exposed to something, and it fixes our notion of what it is. For years, whenever I thought of jazz, I pictured a saxophone in my mind’s eye, and I heard a particular sound. While that sound is representative of some jazz, it’s certainly not representative of all it.

Bela Fleck and the Flecktones, an all-star lineup of progressive jazz musicians, demolished and rebuilt my ideas of what jazz is and can be at the Strathmore Music Center recently.

Bela, the bandleader, plays the banjo — an instrument I’d never imagined could be used in jazz. In using the banjo as a jazz instrument, Bela is an innovator and pioneer, as well as a marvelous, virtuoso player. He certainly impressed at the Strathmore on Dec. 2!

In addition to my fixation with the saxophone, I believed, at some level, in a hard separation between jazz and roots music. That, too, turned out to be a mistake. As a member of New Grass Revival, Bela became known as one of the best bluegrass banjo players in the world, and that influences his jazz compositions and playing, as do elements of folk music.

The Flecktones are a truly impressive group of players. An inventor as well as a musician, Future Man (the stagename of Roy Wooten) plays an electronic percussion instrument of his own creation, the drumitar, a sort of drum-machine/guitar synthesizer. It has a wild sound, like something that came — you guessed it — from the future.

Future Man called Howard Levy “the man with two brains,” a reference to his dual duties on the harmonica and piano. With his blues harp (another term for harmonica), Howard achieves chromatics that are unique to his playing. Impressively, Howard played the piano with one hand while using the other to guide his harmonica. Two brains indeed!

Howard said he’d never heard any play like Future Man’s brother, bassist Victor Wooten. That’s because Victor doesn’t always play the bass like it’s a bass. While he uses the normal slapping technique much of the time, he also picks the instrument. Victor is, at times, paying banjo rolls on an electric bass!

Stream the self-titled debut album by Bela Fleck and the Flecktones on Spotify:

Little injections of humor kept popping up throughout the show. There’d be a few seconds here and there of a popular TV theme or some other piece of recognizable popular music. Instantly familiar, the digression was over almost as quickly it started, ending just before you could put a name to it.

This concert celebrated the 30th anniversary of the band, formed by Bela in 1988, initially for a performance on PBS’ Lonesome Pine Specials. Bela joked that he didn’t think the band would still be talking to each other in three years, let alone 30.

If your concept of jazz is, like mine was, tied to the smooth jazz heard in elevator muzak, then Bela Fleck and the Flecktones will be a revelation. This is cutting edge, space-age music, half acoustic and half electronic (at least as it was played at Strathmore — Bela also has an electric banjo).

For more Bela Fleck and the Flecktones, visit the band’s website.