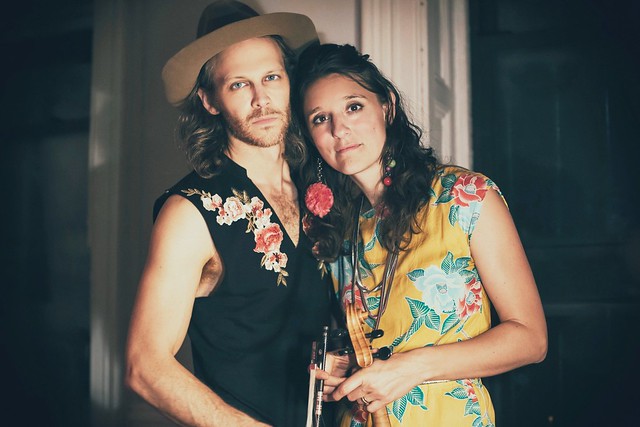 It’s been nearly a dozen years since David Wax and Suz Slezak played their first show together, kicking off a partnership that’s led to seven records, multiple Top 20 chart placements, performances alongside contemporaries like The Avett Brothers and heroes like Los Lobos, and — most importantly — a family of four. As that family has grown, so has the band’s sound. Filled with husband-and-wife vocal harmonies, Mexican stringed instruments, melodic hooks, and blasts of brass, David Wax Museum’s albums fly the worldly flag for a brand of Americana that reaches far beyond American borders.

Early in 2018, after honing a new batch of songs on the road, they found themselves making music in the Nashville-based home studio of Carl Broemel (My Morning Jacket, Ray LaMontagne), who produced David Wax Museum’s most compelling work to date, Line of Light. Released in 2019 by the Austin-based indie label Nine Mile Records, the album refocuses on the band’s two co-founders. Weaving the personal with the political, the global with the spiritual, Line of Light chronicles the landscapes and longings that connect us all.

Watch the official music video for “Uncover the Gold” by David Wax Museum on YouTube:

“These songs look at the process of persevering through the dark times, whether that darkness comes from outside yourself or within,” said Suz, who was initially diagnosed with bipolar disorder in her 20s. She experience a relapse in manic depression during the album’s recording cycle, and even had to wean her 1 year-old child during her final days in the studio, knowing that her medication would harm a nursing child.

Those challenges loomed over David Wax Museum as they finished the record. “It’s an album that tackles big-picture issues,” she added. “David describes the first track as the sort of song you’d want to leave your kids, and I do think that having children makes us feel like we really need to say something with our music.”