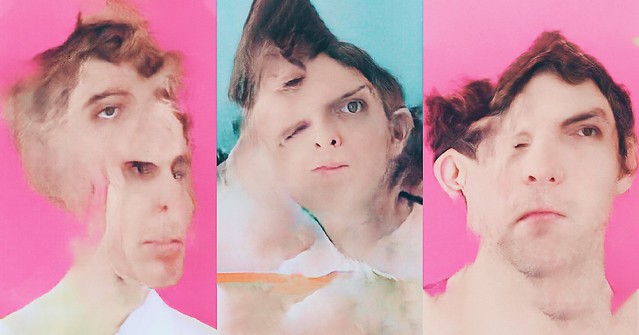 Disco punks YACHT recently released Chain Tripping — the band’s seventh LP and third for DFA — after recording it between Marfa, Texas, and the band’s home in Los Angeles. The 10 songs are unlike anything YACHT has ever made: pop experiments from a sideways dimension coaxed into their studio through a portal opened by machine intelligence.

Chain Tripping received a Grammy nomination for Best Immersive Audio Album in the 2020 Grammy Awards, and YACHT performs the album in full at Songbyrd Music House on Wednesday, Jan. 15.

“AI and Machine Learning represent a revolution in music equivalent to the introduction of the synthesizer or the beginning of laptop music. We’ve been a band long enough to watch technology overwrite our assumptions many times, and felt compelled to bring these new tools into our life,” YACHT said.

YACHT (an acronym for “Young Americans Challenging High Technology”) is Claire L. Evans, Jona Bechtolt, and Rob Kieswetter. For Chain Tripping, the trio invented their own working method, at the intersection of DIY and high-tech: they used neural networks to break their patterns apart into infinite variations, which they re-assembled into new songs that they then learned, performed, and recorded live. Rather than rely on any single tool, they brought together several distinct AI processes to generate lyrics (Char-RNN), musical data (MusicVAE), raw audio (SampleRNN), and instrumentation (a “neural synthesizer” called the NSynth). They were inspired by the long history of generative composition, from William S. Burroughs’ cut-up writing method to David Bowie’s custom “Verbasizer” lyrics software from the ‘90s.

Watch the official music video for “Scatterhead” by YACHT on YouTube:

“Scatterhead” splits the difference between postmodern rock and no-wave dance music with wiggly ease, like “vaseline on the dance floor,” Jona said. Throughout the album, surrealistic idioms and demented earworms surface unexpectedly, riding on a current of oddly hooky, destablizing melodies, and grooves.

“All of this experimentation would be meaningless if it didn’t result in something larger than the sum of its parts,” YACHT said. “This album challenged us in unexpected ways, opened new dialogues, and ultimately touches something deep about who we are. This is what technology can do it if it’s wielded with love, in a spirit of self-discovery. This is what artificial intelligence can be if we think of it not as an endgame but as a starting point.”