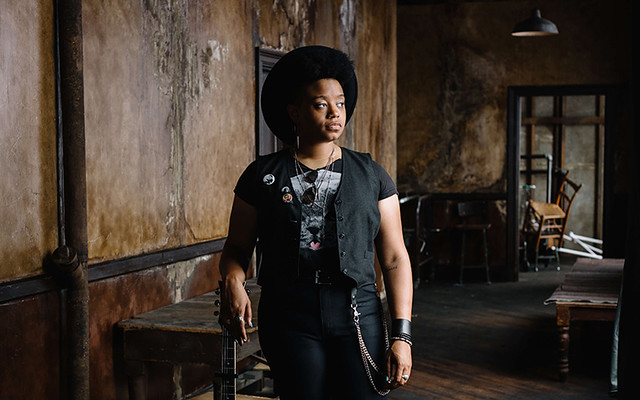 Johnson City, Tennessee-based folksinger Amythyst Kiah opened for Yola recently at the 9:30 Club. As she explained before playing “Jolene,” the two met several years at a Dolly Parton tribute, and have been friends ever since.

Amythyst wrote the song as part of her excellent collaboration with Rhiannon Giddens (who we caught up with last September) and Alison Russell of the Birds of Chicago (who performed with the Sisters of the Strawberry Moon last March), Songs of Our Native Daughters. The artists wanted to use “the power of folk music” to tell the stories of black women, past and present. They also wanted to “reclaim the banjo,” which originated in West Africa. They were nominated for Best Duo/Group at last year’s Americana Music Awards.

One of the stories told on Songs of Our Native Daughters is that of “Polly Ann Taylor,” John Henry’s wife, co-written by Amythyst and Alison. John Henry is the familiar “steel-driving man” of folk tales; they felt that Polly Ann deserved to be more well-known in her own right. In addition to running a household — no easy task, as Amythyst emphasized — Polly Ann did John Henry’s job when he was sick, too.

Amythyst began her set with “Hangover Blues,” a song about “what can happen when you have too much fun with alcohol.” Introducing “Firewater,” she told the audience that “there’s another side to that” story. She switched instruments, and she received what she said “might be the greatest reception for a banjo I’ve ever heard.”

Amythyst’s set also included the traditional “Darlin’ Corey,” about a female gunslinger, and a love song called “The Worst.” She has a new album coming out this spring, Wary and Strange.