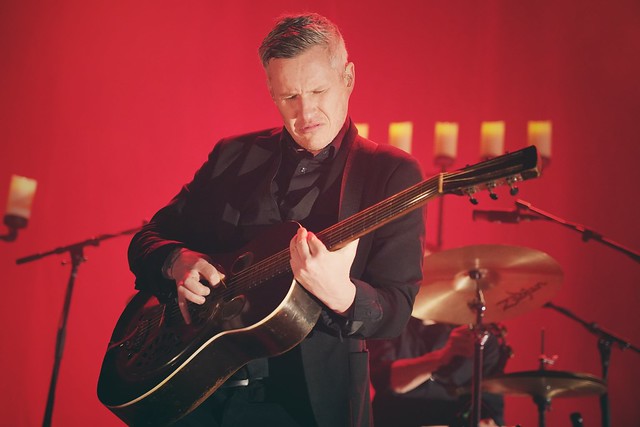 Moonshine corn whiskey was on special at Ram’s Head Live recently, and if you studied some of the specimens strolling down the foyer toward the box office as the evening kicked off, you’d have thought that to be an appropriate drink of choice for the occasion. It was clear these folks would want a grown-up’s beverage to coax into action whatever thoughts were festering inside their heads, about to bust loose like some old rusty dam.

Since the band formed in Santa Cruz in 2002, The Devil Makes Three has distilled its own seductive, raw blend of gloomy ragtime, bluegrass and punk-spiked, string-woven rhythms. The music can physically and mentally hook you, and the band uses it as an altar for delivering prophetic, tongue-in-cheek stories of spiritual demise with playfully macabre messages about the perils of life and all its temptations.

Their consistency on the road and a blending of numerous genres has led to a devout following, maybe especially so in a treacherous city like Baltimore — a fitting backdrop for sharing a credendum culled from the dingiest, forgotten back alleys in the least-welcoming towns of America.

Opening with the a cappella take on Bill Monroe’s existential waltz “What Would You Give (In Exchange For Your Soul)” and leading into “There’ll Be a Jubilee” at Rams Head Live on Jan. 23, lead singer and guitarist Peter Bernhard flipped the switch, starting what would become a hoedown both funky and forlorn.

Like a crew of goblin pirates high on absinthe navigating a highjacked vessel down the flooded streets of Baltimore, The Devil Makes Three transformed the venue into its own personal schooner — the booze-guzzling, foot-stomping, war-whooping audience like a load of pierced and tattooed passengers crammed down in the hull, concerned not for their own safety or where the whole thing was headed, but only about the next note or lyric.

A band that’s played locally at the likes of The 8×10 and, more recently, the 9:30 Club, TDM3 showed up at Ram’s Head Live as a different version of itself than Charm City fans are accustomed — the group recently underwent a significant change, longtime double bass player Lucia Turino decided to stop touring last year.

Replacing Turino was a candidate the former bassist herself selected: MorganEve Swain, a widely respected multi-instrumentalist and vocalist, and no stranger to the band. Swain is widely adored for her work in Brown Bird, a group that disbanded in 2014 after the untimely death of her husband and former bandmate, Dave Lamb. But the duo had previously toured with TDM3, which gave MorganEve the opportunity to sit in on cello and violin numerous times.

So it was little surprise TDM3 hit the stage in full swing Thursday night, as tight as a dungeon corridor as they spun through song after song with only few-second gaps in between — like an old-fashioned jukebox that the crowd would have gagged with coins if they could have only reached the stage.

The Devil Makes Three catalogue is rife with marching, chip-on-the-shoulder, back-country boogies dressed in a striking language that prod life’s necessities or, depending how you look at it, fallacies — faith, law and order, prescription drugs, even our education system. These are twisted takes about unraveling, desperation, plummeting to the bottom, drowning in sin and substance, and at the same time, they can offer redemption in the form of a common-sense comfort that “this life, it ain’t right for everybody,” as “This Life” puts it.

The band took the exuberant audience through TDM3 standards like “Hallelu” and “Help Yourself,” a tune that portrays a brutally honest God who “helps those that help themselves,” and then surmises it best that you, the listener, “help yourself.”

Having lived or at least experienced life in all corners of the country, it’s difficult to place an accent on Peter Bernhard, who hails from Vermont and now lives in Nashville. But in the same vein as legendary bluegrass singers like Del McCoury nurturing that high, lonesome sound, Peter has discovered in his voice an ominous, pulsating and haunting tone with a sneering quality and he’s honed it on some tracks to create an image of a horse-drawn carriage spun out of control down the mountain side as if in some horrifying midnight pursuit.

His was best heard Thursday night on songs like the self-punishing “Deep in My Heart” — he lets it fly during the chanting chorus. But Bernhard can also use his sharp tongue as a cutting tool and in many TDM3 tunes, his punchy vocals bounce off or cut between his bandmates’ instruments, like on the favorite “Bangor Mash,” an irresistible gypsy-ska-punk amalgamation with a sullen look on life and death, and “Aces and Twos,” which tracks a gambler whose identity is muddled while his luck is questionable.

Tenor banjoist/guitarist Cooper McBean, dressed to slaughter in suit and tie, has the presence of a reformed hitman turned concierge at some desolate wild-western frontier hotel, and his underprized voice is from another time and place — though he, like Peter, is from Brattleboro of the Green Mountain State.

His carnival barker, vintage radio pitch coupled with his warm twang was crucial in driving some of the bands more straight-ahead country style work, like the endearing truck-driving tune “Wheels,” and helps set the mood in bleaker, more ghoulish tracks, like “The Bullet.”

A seasoned picker who swapped banjo for guitar, guitar for banjo throughout the night, Cooper’s power plucks help mutate songs like “Drunken Hearted Man,” a Robert Johnson tune, into a bluegrass-headbanger’s masterpiece, and tracks like “Black Irish” into a barley-fed, heavy-metal jig.

Stream Live at Red Rocks by The Devil Makes Three on Spotify:

Officially playing her sixth show with TDM3, MorganEve sounded and looked right at home. While hers is naturally a different presence than Turino, it’s a welcome one — MorganEve was graceful, focused, and mysterious. Her injections on “Poison Trees” were sharp and scary in their timing, as if she’d written them herself.

Using the bow on the bass during the song “Graveyard,” MorganEve carefully sawed a descending, deeply hollow resonance to give the song a new texture and, well, life. And, later, MorganEve’s speed and skills were on full display during her fiddle-banjo breakdown with Cooper two-thirds of the way through the set.

Percussionist and fellow Vermonter Stefan Amidon — with the countenance of crypt keeper, eyes wide and piercing with the faintest, eerie smirk — has been touring with TDM3 since 2015, and he provides so many potentially underappreciated layers to their live shows. He was especially impressive on songs like “Mr. Midnight,” where he infuses a jazzy or vaudevillian high-hat beat into the old-time cautionary tale of addiction or gluttony.

Like a hellbent cult with absolute devotion to its leader, the Rams Head Live audience belted that song out, word-for-word, without any prompt from Peter, but received a genuine thank you after its completion. When he did ask for the crowd’s assistance, the moonshine corn whiskey was long in effect as the band ventured into high-energy tracks like “Black Irish.”

Capping the set with “Do Wrong Right,” which has become almost a motto for the band and its following, you’d have to wonder if sketchy advice has ever sounded so good. “If you’re gonna do wrong, buddy, do wrong right,” captured Peter’s and his mates’ high-brow, cutting-edge perspective on hell raising but in the form of gorgeous banjo-led bluegrass track that sounds like it’s been around forever.

Perhaps the intended irony of the lyrics, the song is laced with wisdom that counterbalances Peter’s more questionable suggestions. While giving a subtle nod of approval for the occasional mess or even — walk carefully here — crime, it’s actually loaded with wisdoms like “quiet in the head ain’t no way to get it done,” and “the road don’t go forever so ride it while it lasts.”

Closing out the night with a pair of classics, “Old Number 7” and “St. James,” The Devil Makes Three guided the crowd to old and familiar territory — a finale that seemed to vanquish any concerns about the band’s future in the wake of Turino’s departure from touring.

Old Number Seven is a creepy if not catchy gypsy jazz number that blatantly pays tribute to “Jack Daniels Old Number Seven” — that’s right, the whiskey — while documenting the saga of a drunkard who can’t keep his act together and guzzles himself to death. Still boozing it up in heaven, he’s kicked out for bad behavior as “angels start to look good” to him.

Making a case that they’re just as entertaining and just as buttoned-up, if not better, than they were just a tour ago on their stop in DC, the new-look TDM3 delivered a thirsty pack of participants exactly what they came for: a raucous, two-hour delve into the dubious realms of our own personal conflicts and our societal struggles.

Ingrained in all of it, not coincidentally, the band creates its own melancholy poetry, and oftentimes, startlingly insightful meditations on the rights, wrongs and confusions of the world. Eighteen years after they formed TDM3, Peter and Cooper’s love for the grind is as evident as ever as they’ve now produced six studio albums and released three live albums, including last year’s Live at Red Rocks, while touring aggressively.

Toward the end of Thursday’s show, Peter offered encouraging musicians to stick out, to enjoy what he acknowledged was not an easy process: “I know being a musician is a hard thing to do. People tell you can’t do it, or you’re crazy and you shouldn’t do it, or you should get your shit together. That’s because they have shitty lives… We are evidence that it can be done.”

Here are some pictures of The Devil Makes Three performing at Rams Head Live on Jan. 23, 2020. All photos copyright and courtesy of Casey Vock. 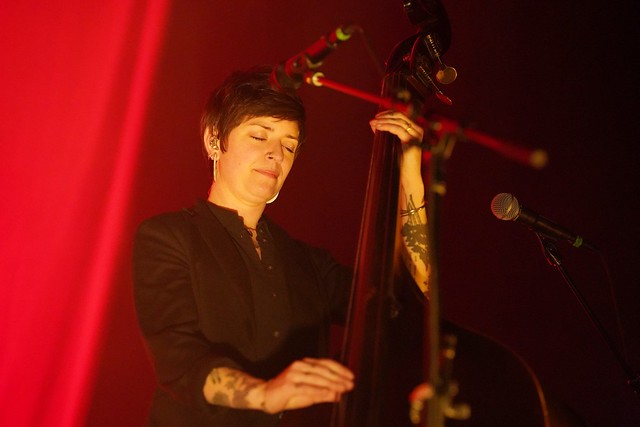 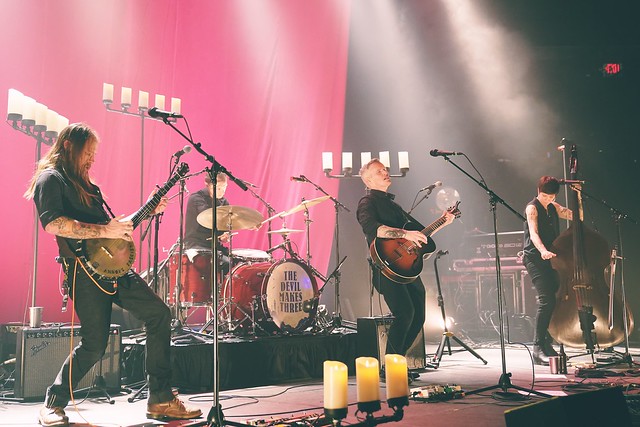 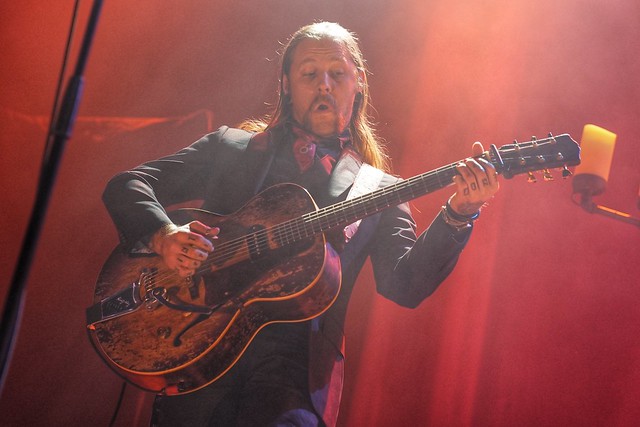 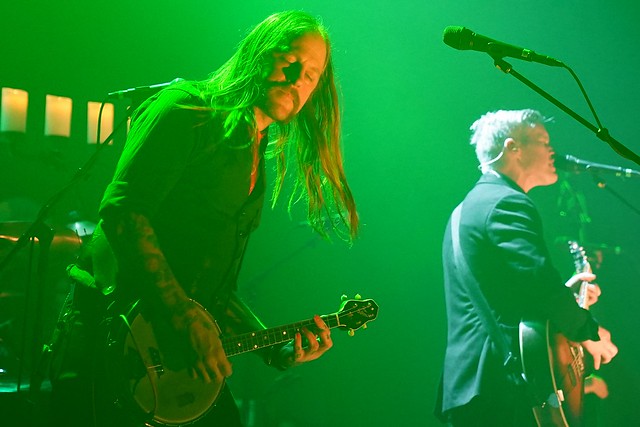 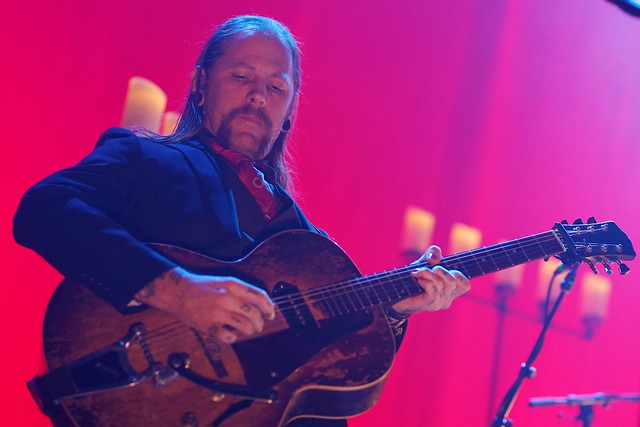 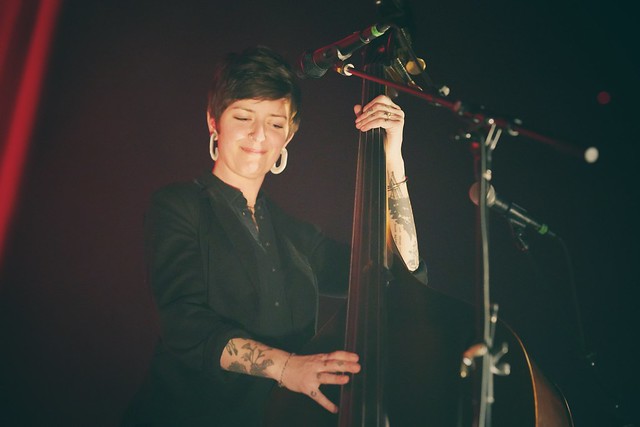 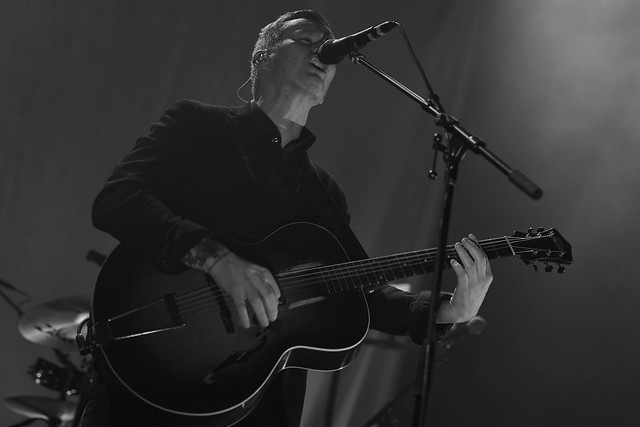 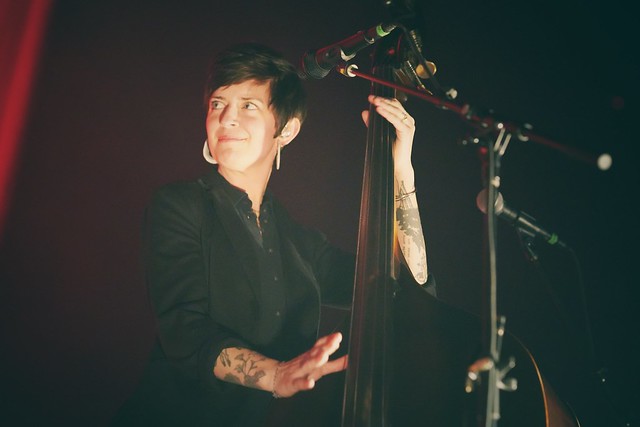 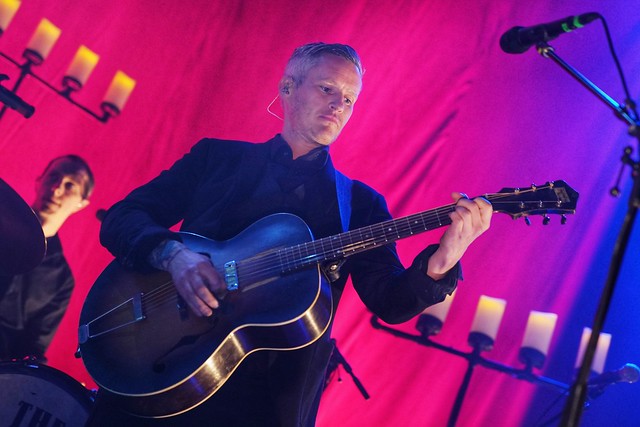 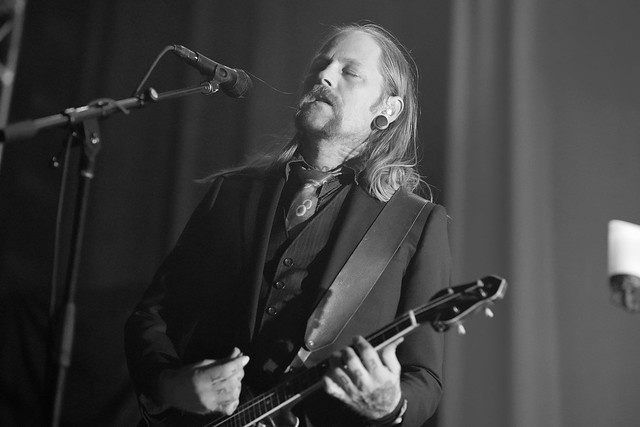 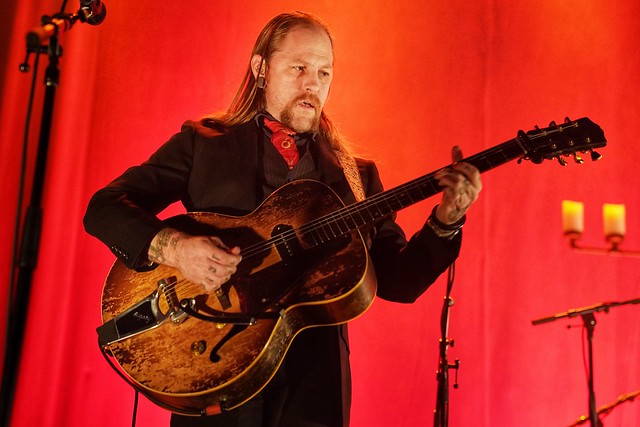 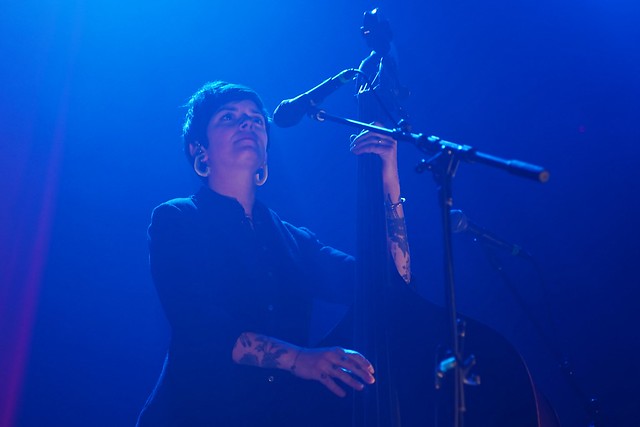 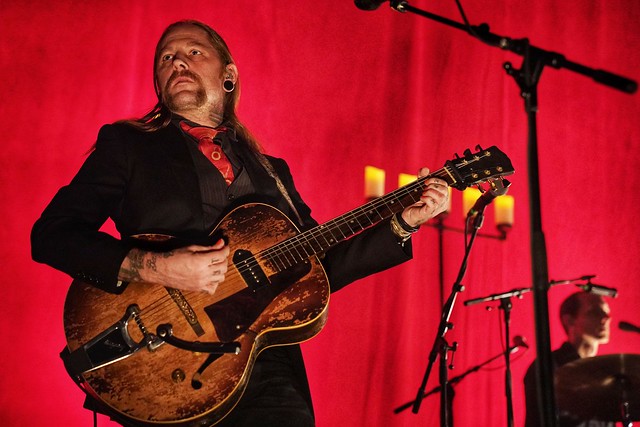 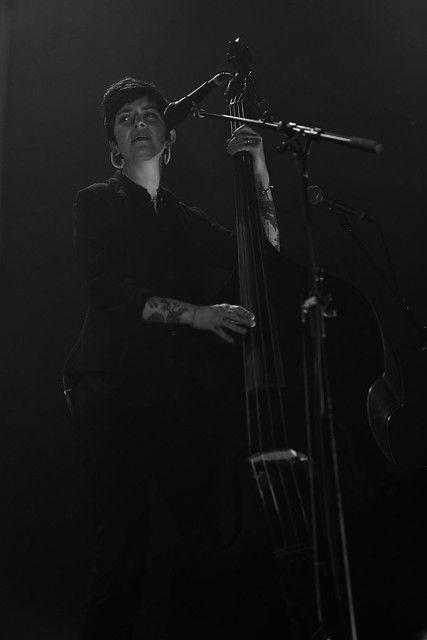 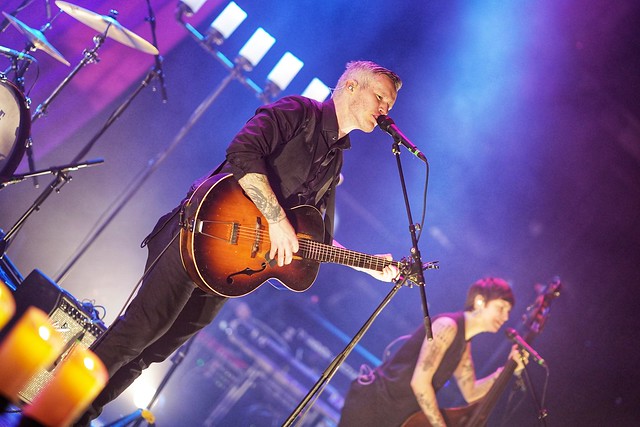 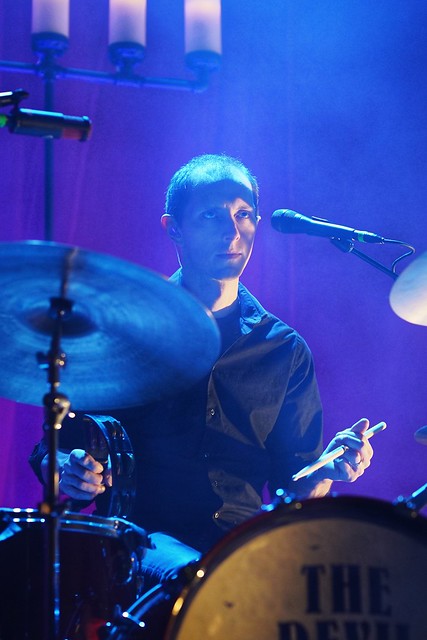 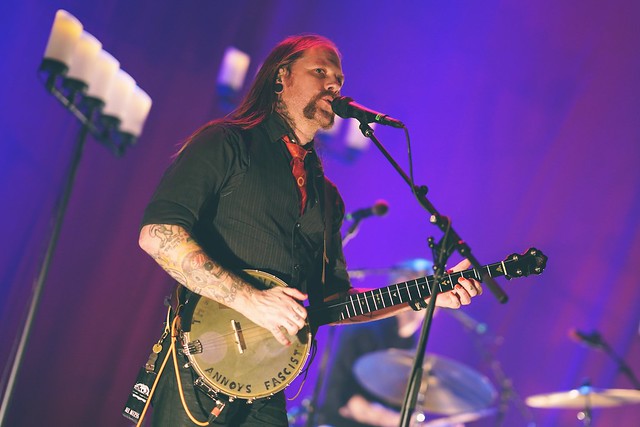 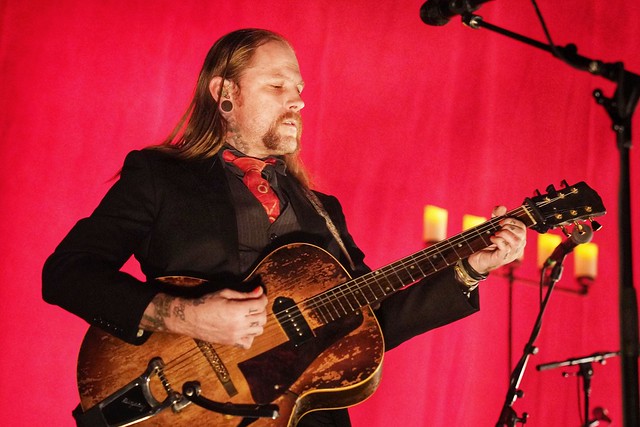 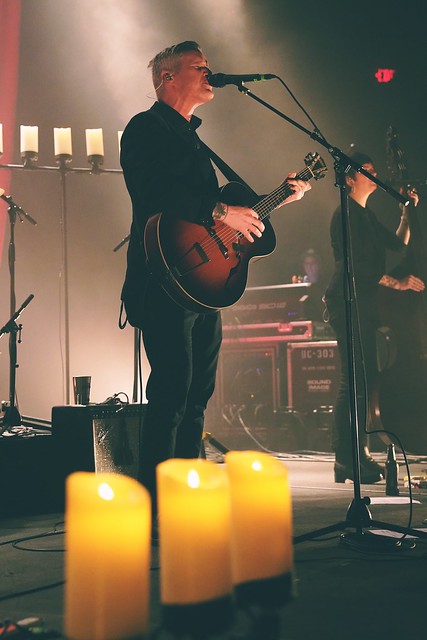 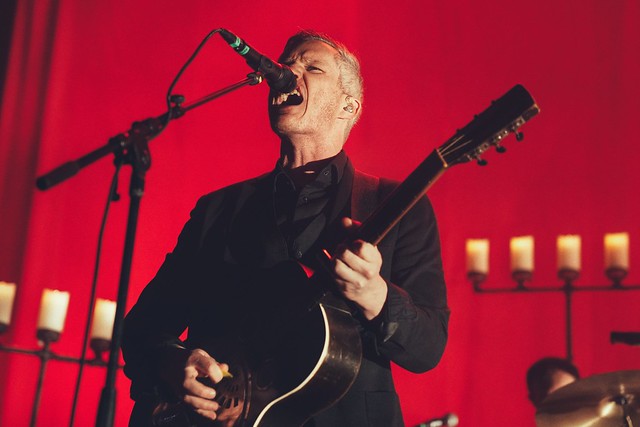 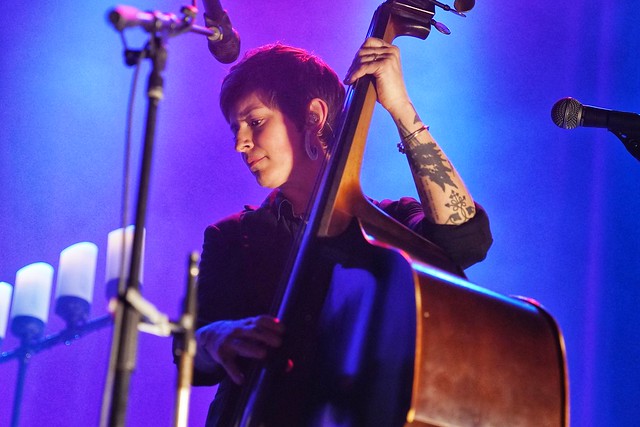 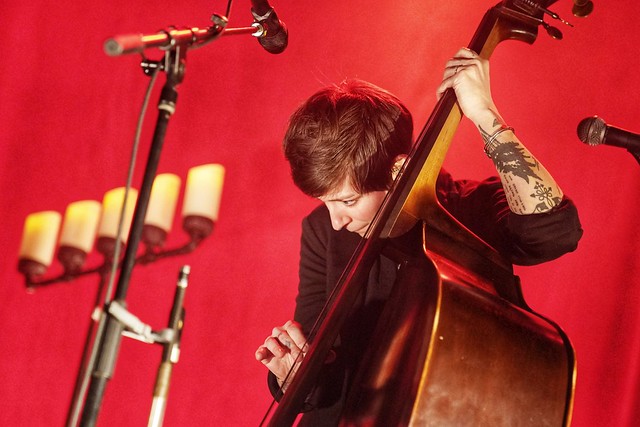 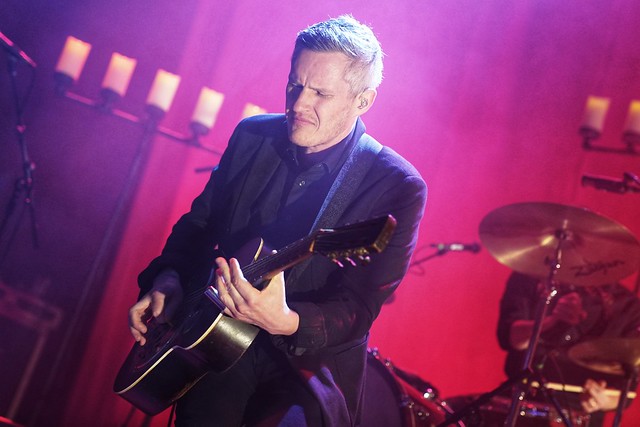 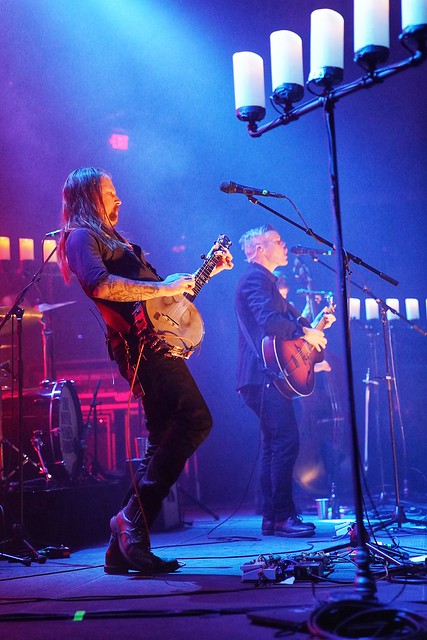 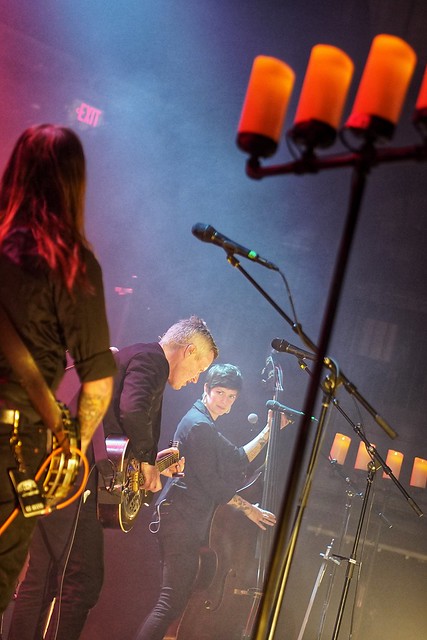 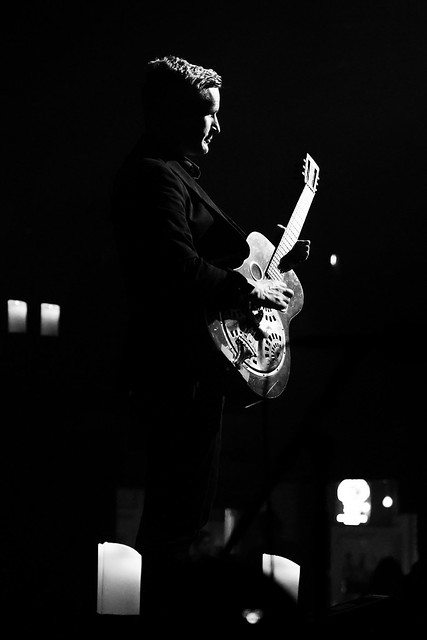