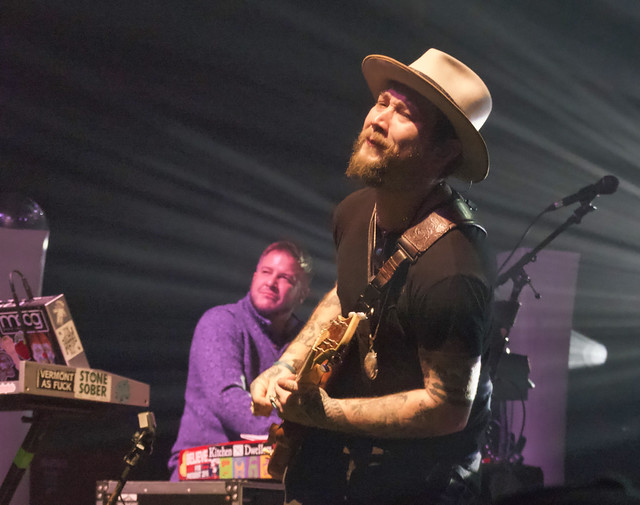 Twiddle performs at the House of Blues in Boston on Dec. 31, 2019. (Photo by Andrew Gardecki)

If you had said the word “twiddle” to me three years ago, it would’ve meant virtually nothing. Twiddle your thumbs? I never really understood that anyways. Fast forward to present day — the moment I see the word “Twiddle” next to a date and location in DC, I’m ecstatic. That’s how I felt when I found out one of my favorite bands, Twiddle, was making a stop at the 9:30 Club. I couldn’t wait to see them again.

The guys of Twiddle did not disappoint at 9:30 Club on Jan. 25! I always felt that George Clinton and P-Funk put on some of the best shows (and that wasn’t even in their prime), but let me tell you, Twiddle rivals them for the best band that I’ve seen live. The performance, the musicianship, the sound, the vibe, all of it — just fantastic. I hope that I can give you a good feel for how great these guys are.

Twiddle is known as a jam-band, but I think that really only scrapes the surface of who they are. Sure, their live shows are centered around improvisation and instrumental solos, but they are so much more than that. Their songs are well-written and meaningful, and also have great melodies. A lot of jam bands aren’t quite the same when you listen to their studio recordings. Twiddle is not like that — their studio albums are just as good to listen to as their live albums.

All that being said, Twiddle’s live performances are something to behold. A true testament to how much passion, effort, and energy is put into their performances is evident by the brief intermission halfway through the show.

It’s not an encore, just a small break. The break is warranted considering basically every song they play turns into a 5-10 minute long jam halfway through, oftentimes with solos from different members of the band. What really sets Twiddle apart for me is the combination of these types of performances and their exceptional musical talent. They are easily some of the best musicians I have heard or seen.

It’s not just guitar solos — the whole band is supremely talented. It’s also not just an exhibition on how great they are as musicians. The band uses their talent and improvisational ability to make some groovy and funky music that gets the audience moving and dancing the whole night.

This is the type of show that leaves you feeling like you got your time/money’s worth when you leave. The show at 9:30 Club did not show online as sold out but ultimately it did sell out. I saw a guy show up to buy a ticket only to be turned away because of the sellout.  It’s not easy to sell out the 9:30 Club — that place can hold a lot of people! Also, it was announced at the beginning of the night that Twiddle is celebrating 15 years. Naturally, they played into midnight, and we were all able to share this special performance with them.

Stream Plump: Chapters One and Two, the latest studio double album by Twiddle, on Spotify:

I think in a lot of ways Twiddle is one of music’s best kept secrets. I can’t wait to see these guys again, and I highly encourage you to go see them if you have the chance. You will not be disappointed. Even if you don’t know their music, you can still enjoy a Twiddle performance. They also often sprinkle in covers of classics that you will be sure to know — on Saturday, they got the crowd singing when they played Richie Valens’ “La Bamba” and The Proclaimers’ “I’m Gonna Be (500 Miles).”

Keep an eye out for Twiddle coming to a venue near you and in the meantime, check out some of their songs below. “Lost in the Cold” in particular is one that I really enjoy and is a great example of their musicianship and songwriting abilities.

Stream Lost in the Cold on Spotify:

Stream When it Rains it Pours on Spotify:

Stream a live performance of Frankenfoote by Twiddle on Spotify: