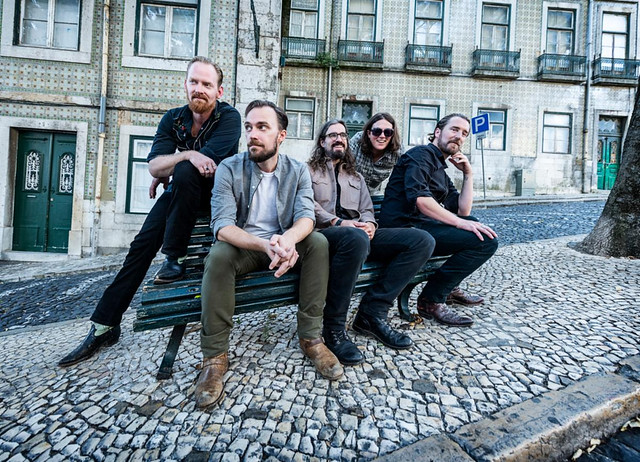 Fruition is a Portland, Oregon-based roots rock/Americana quintet whose style incorporates folk, bluegrass, and soul. Formed in 2008, they’ve released three LPs, most recently Watching It All Fall Apart. Their latest releases are a pair of EPs, Wild as the Night and Broken at the Break of Day, which will be released together one one vinyl disc. Fruition plays DC’s Union Stage on Thursday, Feb. 6.

In anticipation of that show, Parklife DC’s Mark Engleson recently interviewed Kellen Asebroek who plays guitar and piano and is one of the band’s three vocalists. Kellen and Mark discussed the band’s latest pair of EPs, their style and influences, and the band’s current tour.

Kellen Asebroek: Hello. This must be Mark.

Mark Engleson: It is. How are you doing today?

ME: How’s the weather up there? It’s usually pretty cold this time of year.

KA: It is that. It’s cold and snowy and icy and slushy. I’m actually looking out the window from the venue, the Turf Club, right now, and it’s snowing.

ME: When did you start this latest tour?

KA: Just a couple weeks ago. We started in Colorado; did a couple of shows there. We did Aspen, then a big show at the Mission Ballroom. Last night, we did Iowa. We’re now starting the midwest, and it’s kind of the first half of the tour, the early stages. But I can tell you that we’re already getting delirious.

ME: You sort of get lost out there on the road, don’t you?

KA: Lost and found. It’s comforting to have such a tight-knit crew that you can be delirious with.

Watch the official music video for “Dawn” by Fruition on YouTube:

ME: Your latest release was a pair of EPs. I notice they have sort of a night and day thing going on.

KA: We wanted to do something different than how we’d been approaching releasing music in the past. We’d put out a big touring album every couple years. We wanted to do something thematic, some kind of opposing or complementing forces to have a dichotomy. We played around with a couple ideas and landed up with the night and day thing. It kind of evolved out of those concepts.

ME: You took the approach of starting with Wild as the Night and then Broken at the Break of Day. It’s sort of the party and the morning after.

KA: You nailed it. Especially in the world that we live in in the live music industry, we’re night folks, for the most part. I love the day, but the night is when we really come alive, both for the show and just in general for a lot of folks. It is kind of the party at night, reflect and recover and chill in the daytime. This kind of mirrors that, which is what we were going for.

ME: I’ve seen some similar takes on the concept, but I don’t know that I’ve seen it divided into two EPs in this way.

KA: A big part of what we wanted to be able to do was release them in rapid-fire succession and without a whole lot of notice. Hey, here you go fans and future fans, here’s the music. Not too much extra hoopla; we just wanted to get our music out there. But we wanted to be releasing music as much as possible. That’s kind of what started this fire, to be putting out shorter releases more often. In this day and age, it’s kind of a nice way to do it. We wanted to release two EPs, and each EP would fit on one side of a vinyl record.

ME: My understanding is that the economics of streaming favors greater volume of tracks, since you get paid per stream of a song. The structure of EP vs LP doesn’t matter to that, but the more tracks you have out there, the more beneficial it is to you.

KA: Still, at the end of the day, musicians, except for the top five percent of them, aren’t making anything off streams. We want to get our music out there, because we have music to get off our chest. The more content that’s out there, the more people have to digest, they’ll come out and see us, buy tickets and buy stuff. Spread the word.

ME: Is the live going well now? Are you having a successful tour?

KA: Yeah, it’s been great. Like I mentioned earlier, we kicked it off at the Mission Ballroom in Denver — it’s a 4,000-capacity venue — with our friends the California Honeydrops. We filled it out. We packed it to the gills, and it was an incredible milestone for the band, our biggest hard ticket show. Sold out. It was dreamy. The shows in the last couple years have started to be a little more full. It’s been a very slow, slow evolution for us, but it’s always been up, which is encouraging always. We have dedicated fans, and they seem to be growing.

ME: One of the things I found interesting about you guys is that, while a lot of band use the traditional structure with a frontman, you guys eschew for that balancing the lead vocals and songwriting amongst several of you.

KA: It’s not your usual approach. We’ve always played exactly what we want to play. We kind of take that from an older generation of bands. There’s more of a sound that is calling card for the band than the lead singer being the calling card for the band. We’re always switching vocals, and we’re always switching songwriting duties. We put them together under a Fruition umbrella type of sound. It’s always worked for us. I don’t think it necessarily works out for everyone to switch around sounds and singers that much. It works out for us. A lot of it has to do with how we employ three-part harmonies in the right places. That’s our little signature cherry on top that ties our whole sound together. That’s where we’ve found a lot of our success throughout the years in being able to switch over styles and singers and how have a sound.

ME: It does keep it interesting when you’re listening, that there’s some more variety in the presentation.

KA: It kind of keeps you on your toes, and it keeps people engaged. Maybe I’m biased because I’ve been in my for so long, but sometimes, if I listen to the same singer for over an hour, even if they’re great, there’s a chance that it might get a little monotonous. I wish there was some variety. We can check that box for people who need that box checked from time to time.

ME: When I do show write-ups, the more change there is over the course of a show, the more material it gives me to work with. I can build up the description rather just, “One guy sang a song, three guys played their instruments.”

Watch the official music video for “Forget About You” by Fruition on YouTube:

ME: Who are some of those older bands you guys look to as your influences?

KA: You’ve got to think of the Beatles as far as sharing lead vocals and just experimenting and taking chances, but having that sound that still unifies you. Then it’s stuff like CSNY and Buffalo Springfield. An even just old Motown stuff. There’s an infinite amount of influences. Those kinds of bands that were more of a collective, like we were talking about, than a frontman type of deal. That’s the shit!

ME: Any places you’re especially looking forward to seeing on this tour?

KA: I always love getting out to DC. I’m a West Coast boy, and I had never been out there until tours starting taking me there.

ME: First time east of the Mississippi.

KA: Now been around the country a zillion times over the last 12, 13 years. It still trips me out every time to go DC because there’s so much and history and there’s so much crazy shit going on on the daily. So much tension, so much life. It’s buzzing in a way that other cities aren’t. The same reason I love going to New York on tour, coming from the west coast upbringing. Getting to go to one of the central cities of the world is always a treat. It’s always crazy. Makes me feel alive.

ME: I haven’t spent a lot of time in New York. I’ve only been there twice. One time I went, I was in Manhattan, I went into an entire store full of pickles. It blew my mind: an entire store, just for pickles!

ME: I love pickles, but the idea that you can have an entire store just of pickles! Nowhere other than New York would you have this. Things that can’t exist anywhere else exist in New York.

KA: It’s so much opportunity. A lot of that has been romanticized in my mind from Hollywood and books. There’s so much history, so much goddamn history, from the beginning of this country. It’s always a trip to be in places like that. I’m also psyched to be going to see Hamilton.

ME: Nice! Did you have to jump through a lot of hoops to get those tickets?

KA: I got them as a Christmas present for my mother, who is obsessed with Hamilton. Me and her and my pops are going to see Hamilton the day before we play in Brooklyn.

ME: That’s cool that your folks are coming out and meeting you while you’re on the tour. That’s always nice to have family.

KA: It is nice. It can be intense when you’re in the full swing of tour, and to suddenly be grounded like that with this parental love. But it’s the best kind of intense. My parents are huge Fruition fans and huge Hamilton, so they’re like, “We’ll just come out and make a weekend out of it.”

Parklife thanks Fruition and Kellen Asebroek for a stimulating conversation! Make sure to catch them a week from Thursday on Feb. 6 at Union Stage.