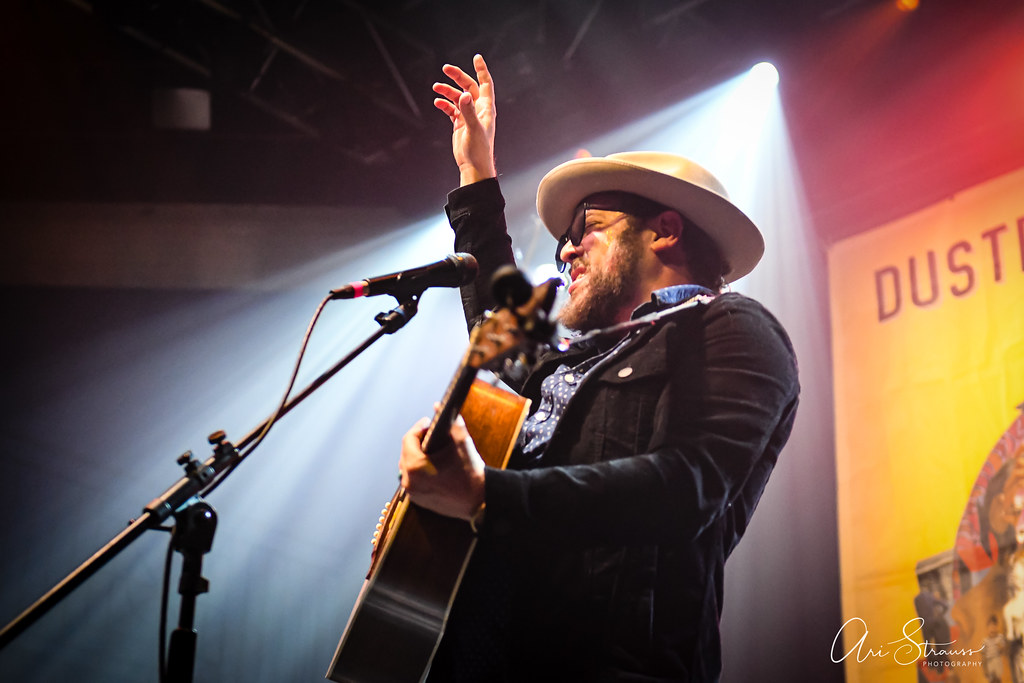 LA-based roots band The Dustbowl Revival in town to promote its new album, Is It You, Is It Me, hit the stage at 9:30 Club on Feb. 7 with a bit of trepidation.

That evening, the legendary DC concert venue was hosting two back-to-back shows and The Dustbowl Revival was headlining the early show. This meant the doors to the venue opened at 6pm and the band was due to take the stage at 7:30pm, after a brief opening set by supporting act, Birds of Chicago. The Dustbowl Revival frontman Zach Lupetin (who goes by “Z”) would later tell the audience he was worried no one could leave work in time make the show.

Alas, the band’s fears were unwarranted. The Dustbowl Revival’s DC fanbase is loyal and strong. By the time the band took the stage to begin their set, the venue was full. 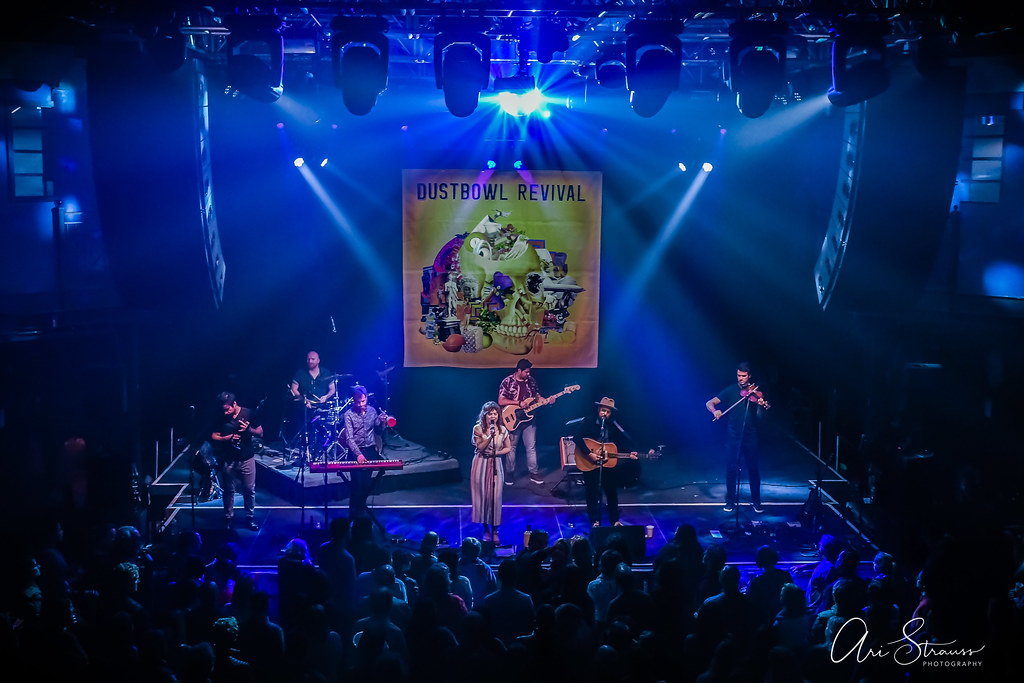 A banner featuring the Is It You, Is It Me album cover hung prominently over the stage and served as the band’s backdrop during their performance. The album released just a week prior to the 9:30 Club show, on Jan. 31, via the band’s own Medium Expectations label and Nashville’s Thirty Tigers. It is Dustbowl Revival’s fifth LP release.

Produced by Sam Kassirer (Lake Street Dive, Josh Ritter) and engineered by Brian Joseph (Bon Iver, Sufjan Stevens), Is It You, Is It Me represents the first time Dustbowl Revival did not approach the recording process with road-tested material. Instead, they spent an intense two-week effort creating and developing the songs in studio as they recorded them. The resulting 13-song track list slowly build and culminate into some of Dustbowl Revival’s most powerful musical moments to date.

Stream Is It You, Is It Me by The Dustbowl Revival on Spotify:

The Dustbowl Revival is comprised of Z. Lupetin (guitar/vocals), Liz Beebe (vocals/ukulele), Connor Vance (fiddle/electric guitar), Matt Rubin (trumpet/keys), Ulf Bjorlin (trombone), and Josh Heffernan (drums). Bassist Yosmel Montejo recorded with the band on Is It You, Is It Me and is laying down rhythm on the current tour as well.

The set opened with “Penelope,” a track from Is It You, Is It Me, and in fact, a majority of the setlist came from the new album. Midway through the show, most of the band took a short break while Z and Liz stepped forward to the edge of the stage and performed “Just One Song” without amplification, using only Zach’s unplugged acoustic guitar as accompaniment.

Later in the show, Liz spotted a woman in the back wearing a tiara. She asked if it was the woman’s birthday or a bachelorette party. When the woman answered that it was indeed a bachelorette party, Liz was excited, “Oh wonderful! This next song is dedicated to you. Its called ‘Good Egg,’ and is about finding yourself a good guy.” After a bit of a pause, she continued, “…or a gall. Dustbowl Revival is an inclusive band, but this sing is written from a hetero female perspective.”

Birds of Chicago, the supporting band, joined The Dustbowl Revival on stage for the last song of the set, an impressive cover of The Band’s “The Weight,” which featured rare vocal solos from Ulf, Matt, and Connor.

The band came back on stage for an encore and performed “The Story.” Then, following an appeal by the crowd, they closed the show with “Lampshade On,” a hit from 2015 that’s become a Dustbowl Revival staple.

Watch the official video for The Dustbowl Revival’s “Lampshade On” on YouTube:

Setlist:
Penelope
Ghost
Debtors’ Prison
Dreaming
Enemy
Sonic Boom
Honey I Love You
Get Rid of You
Mirror
Let It Go
Just One Song (Zach and Liz, unplugged)
Runaway Chorale
Good Egg
Nobody Knows
The Weight (The Band cover; with Birds of Chicago)

Encore:
The Story
Lampshade On

Enjoy some additional photos of Dustbowl Revival performing at 9:30 Club on Feb. 7, 2020. All images copyright and courtesy of Ari Strauss. 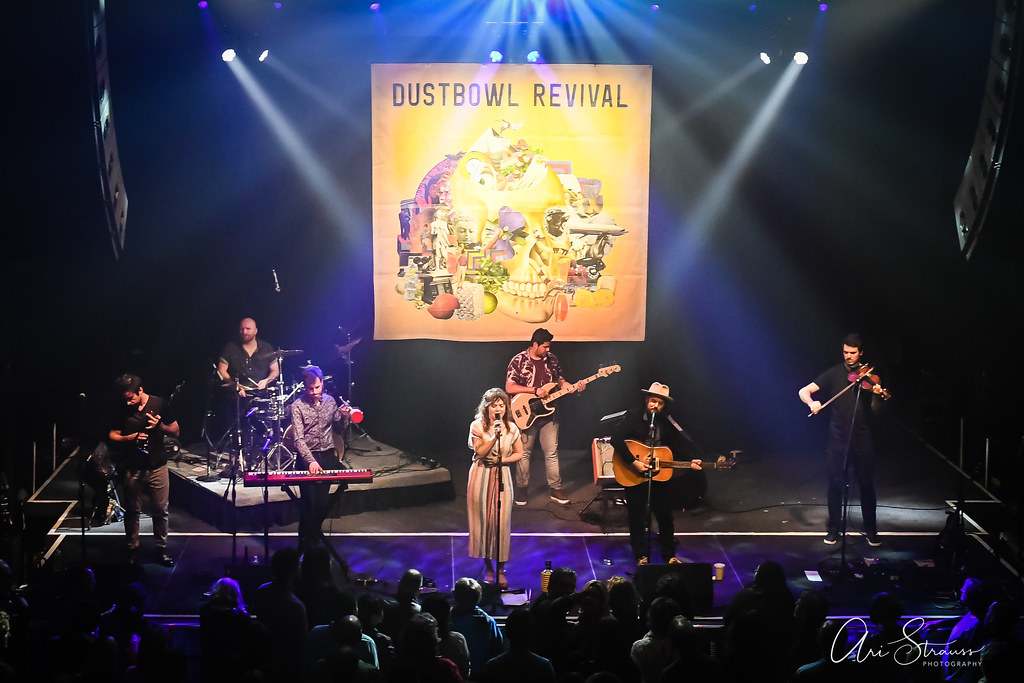 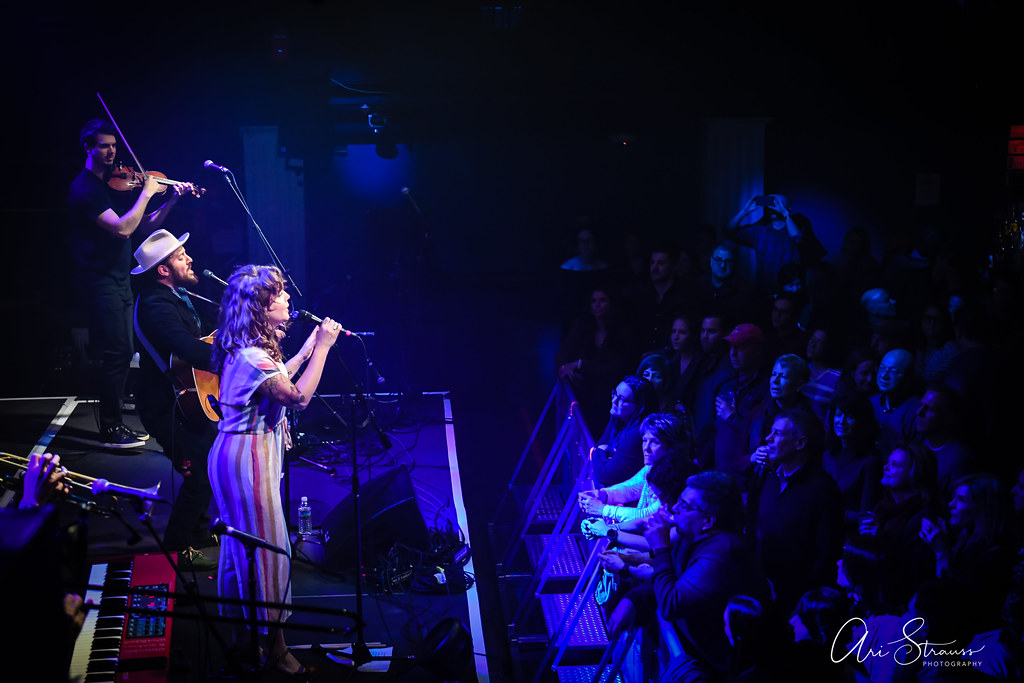 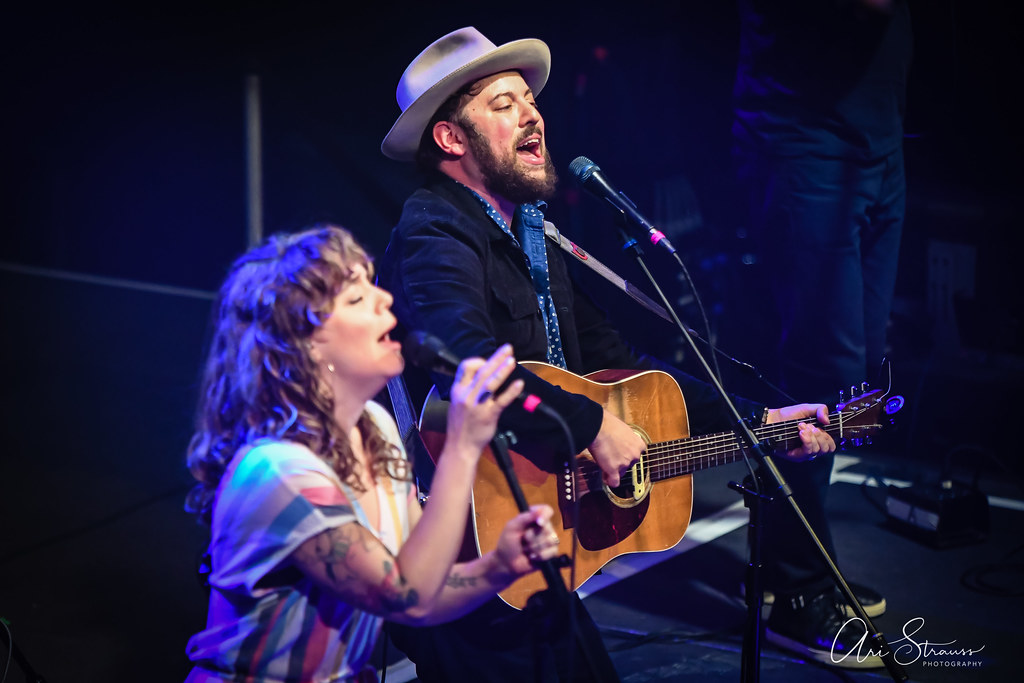 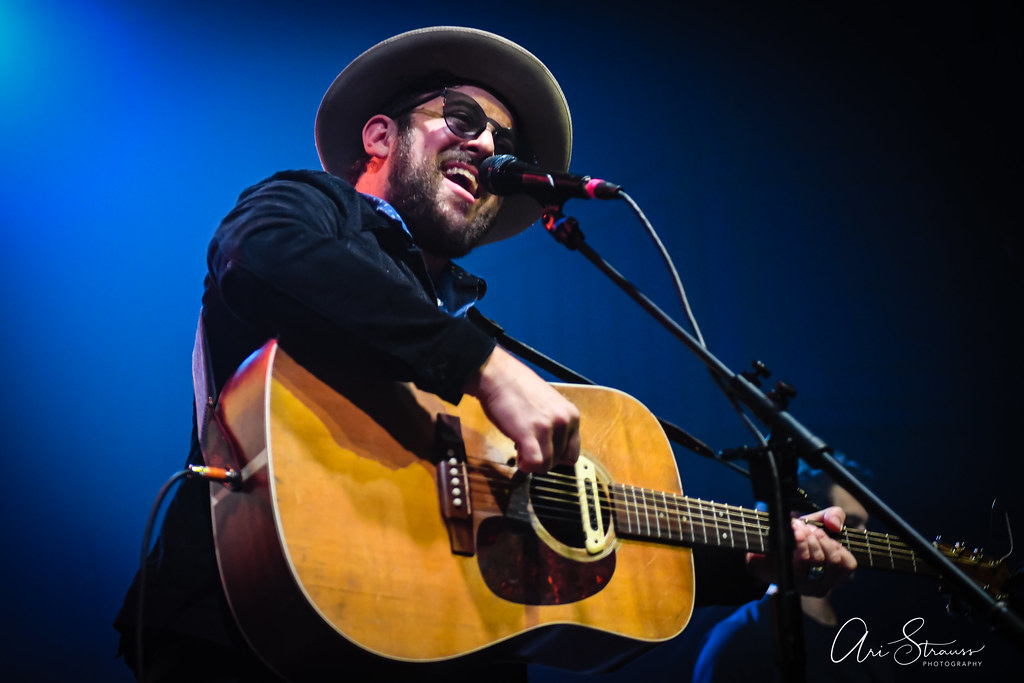 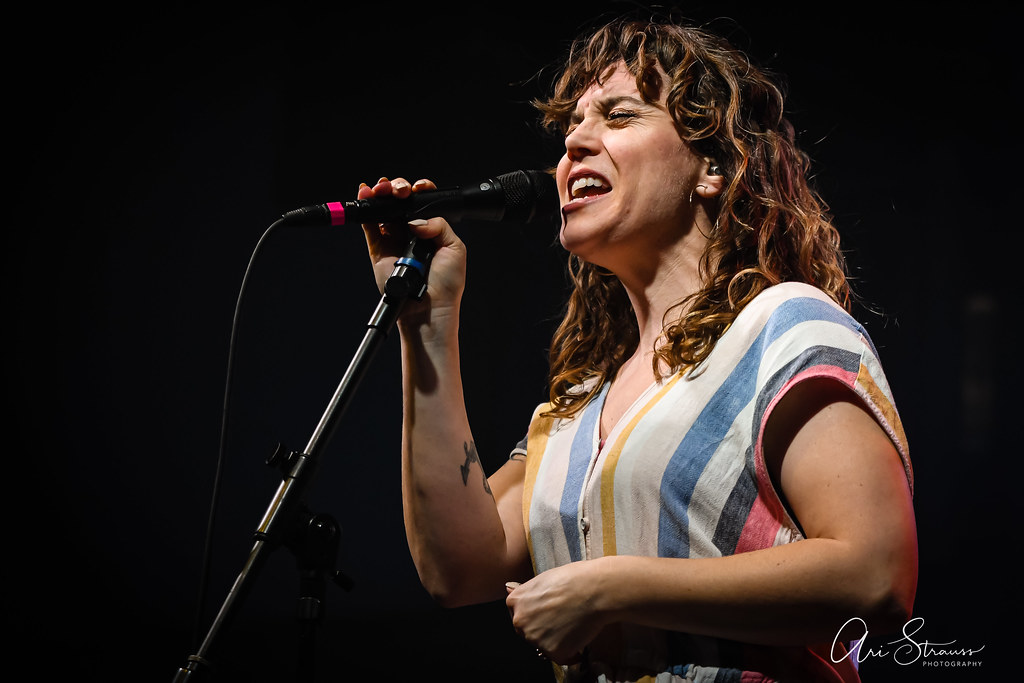 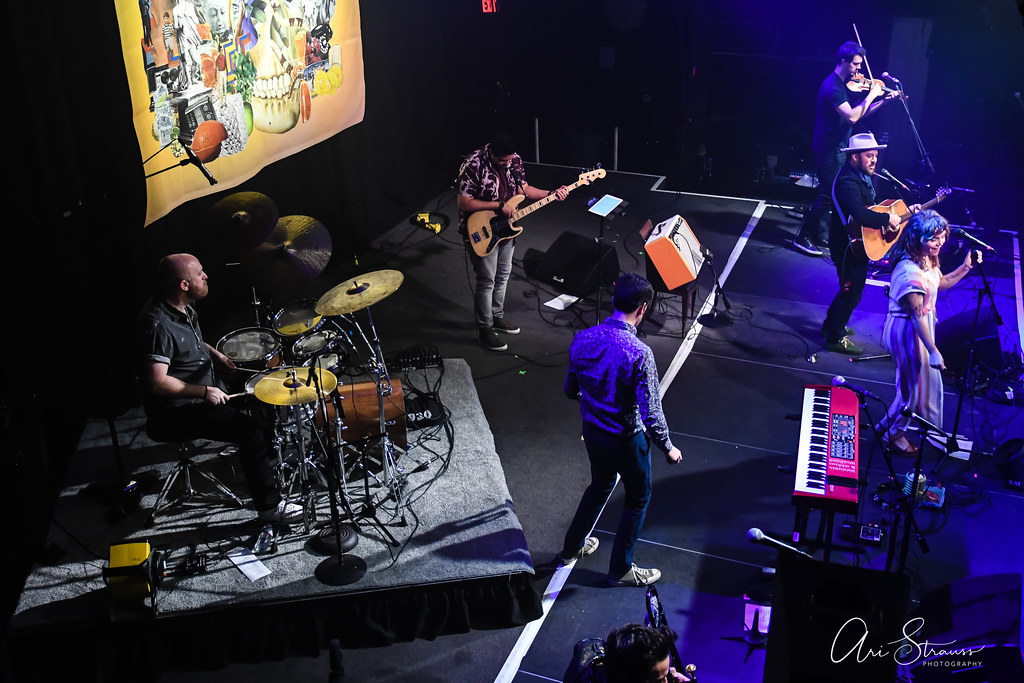 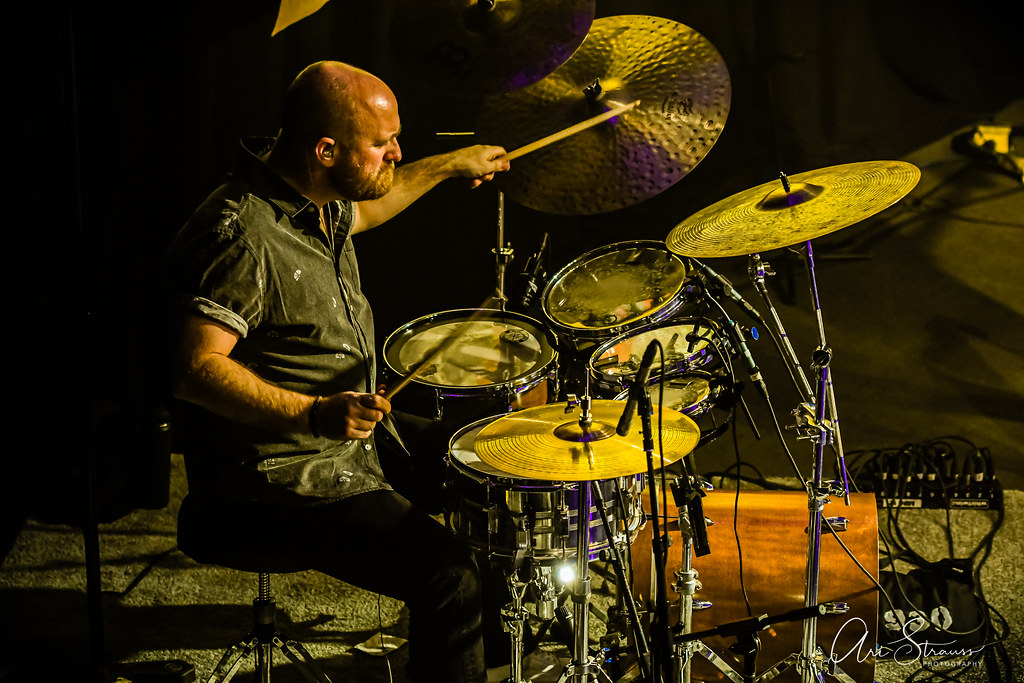 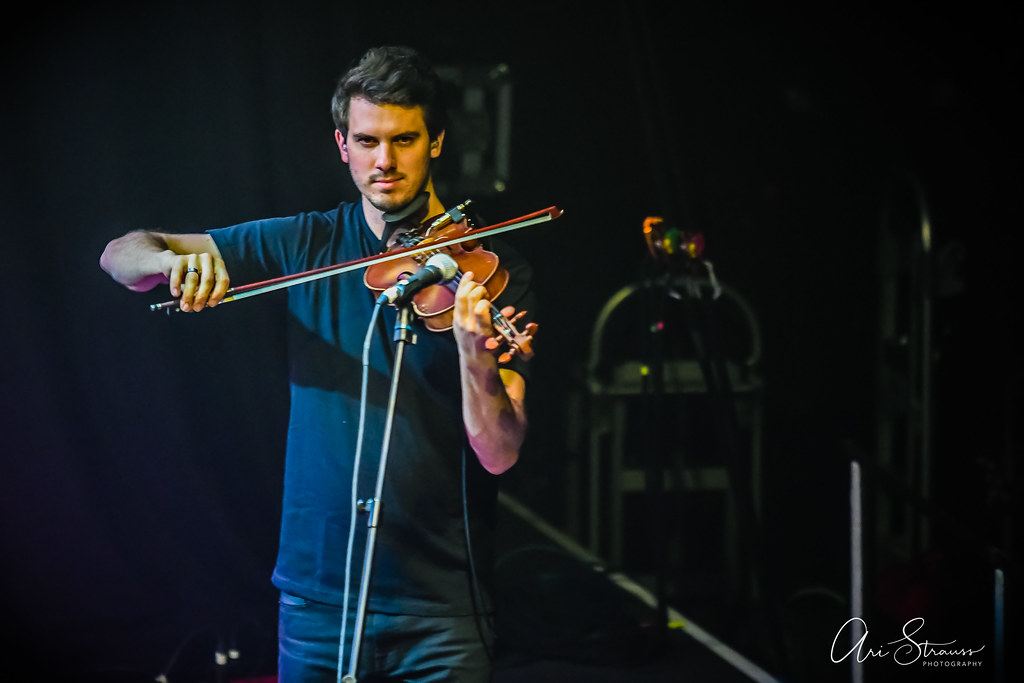 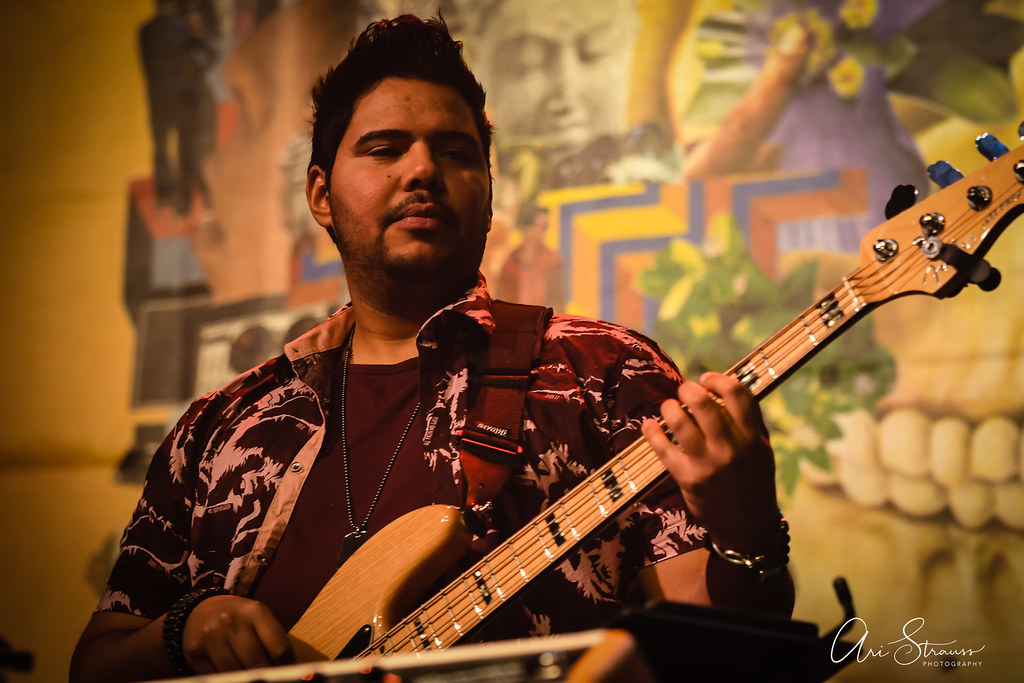 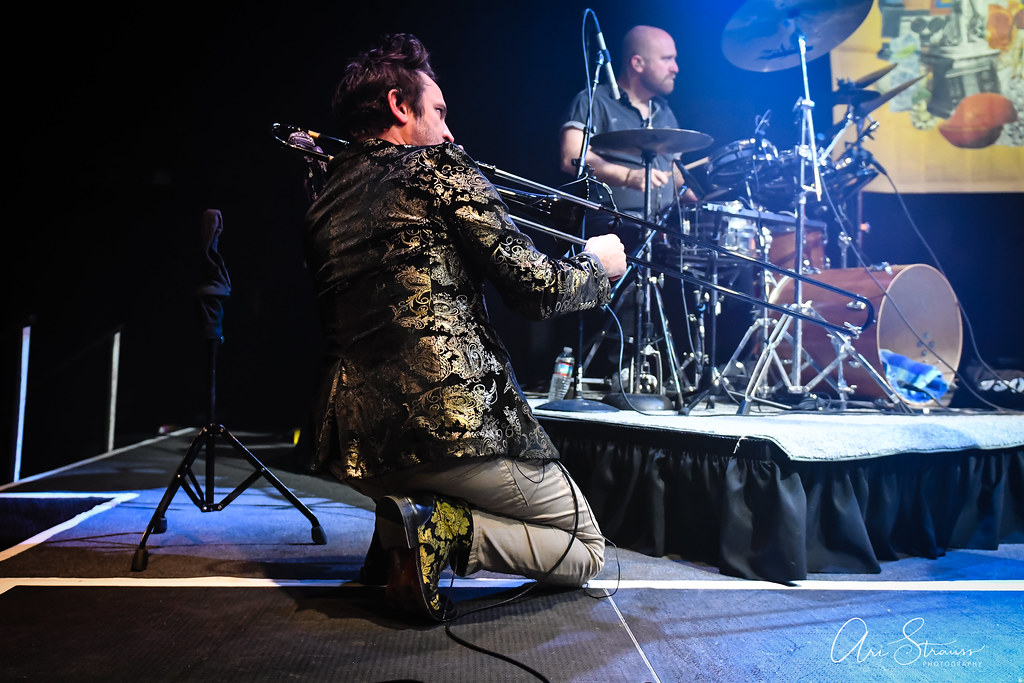 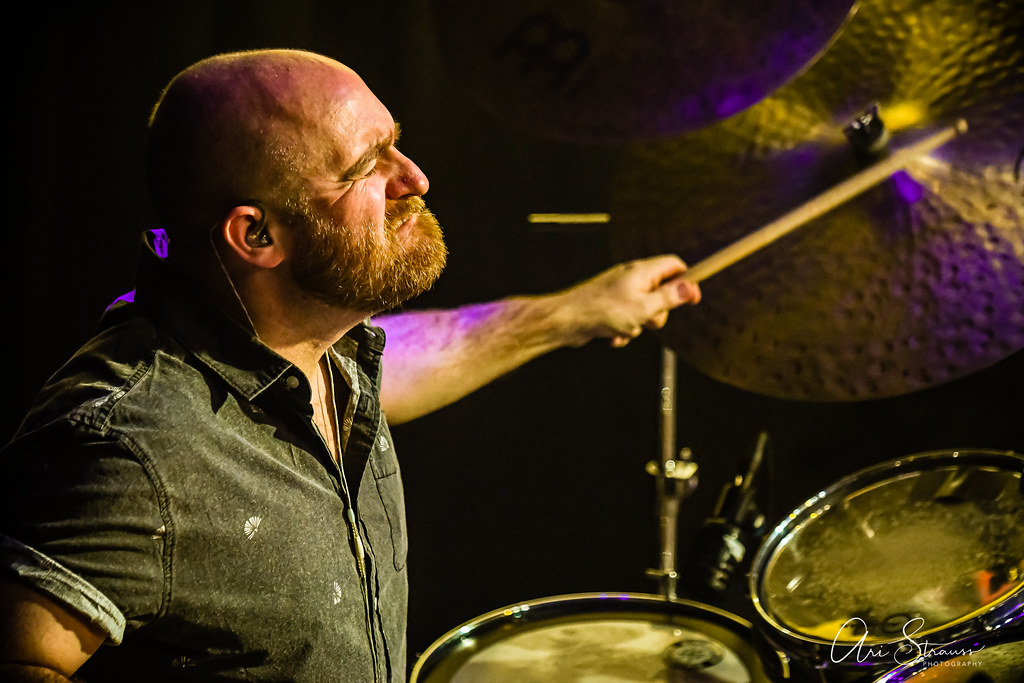 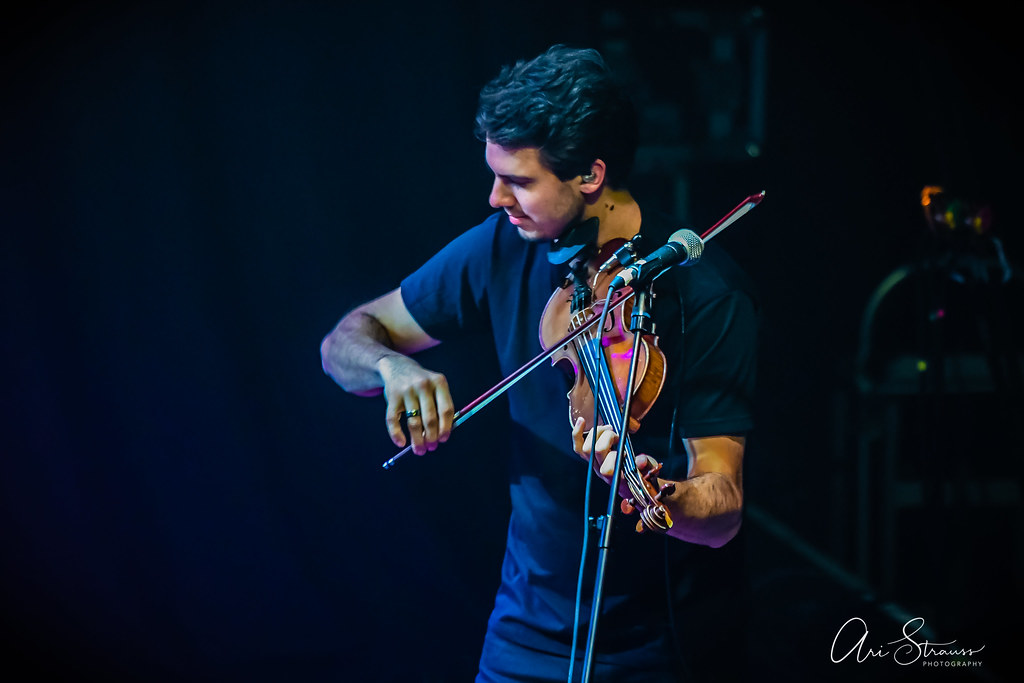 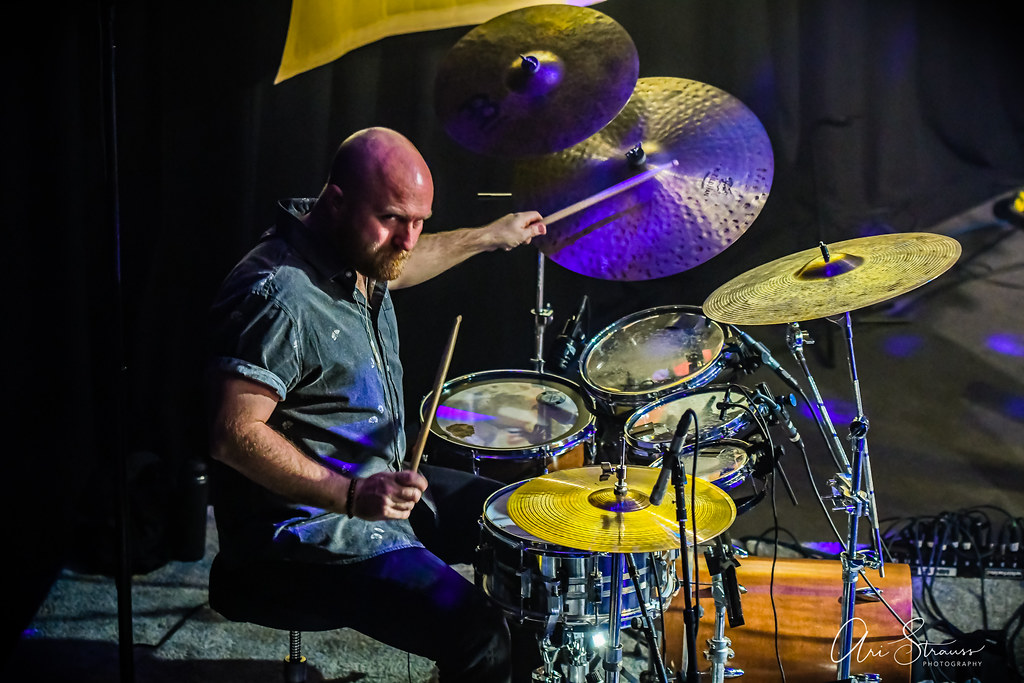 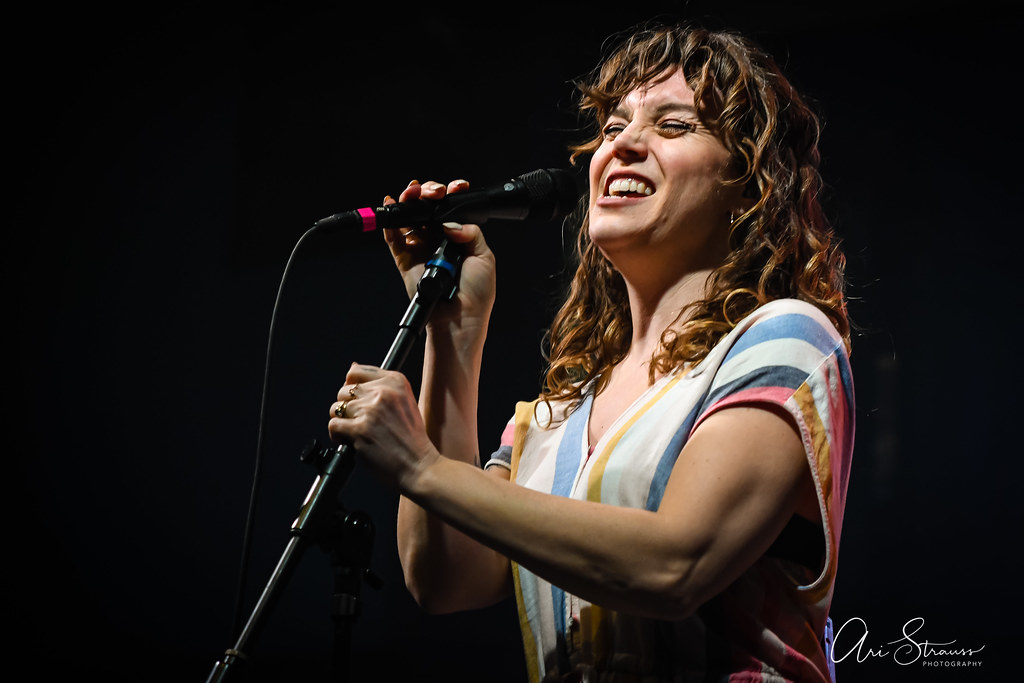 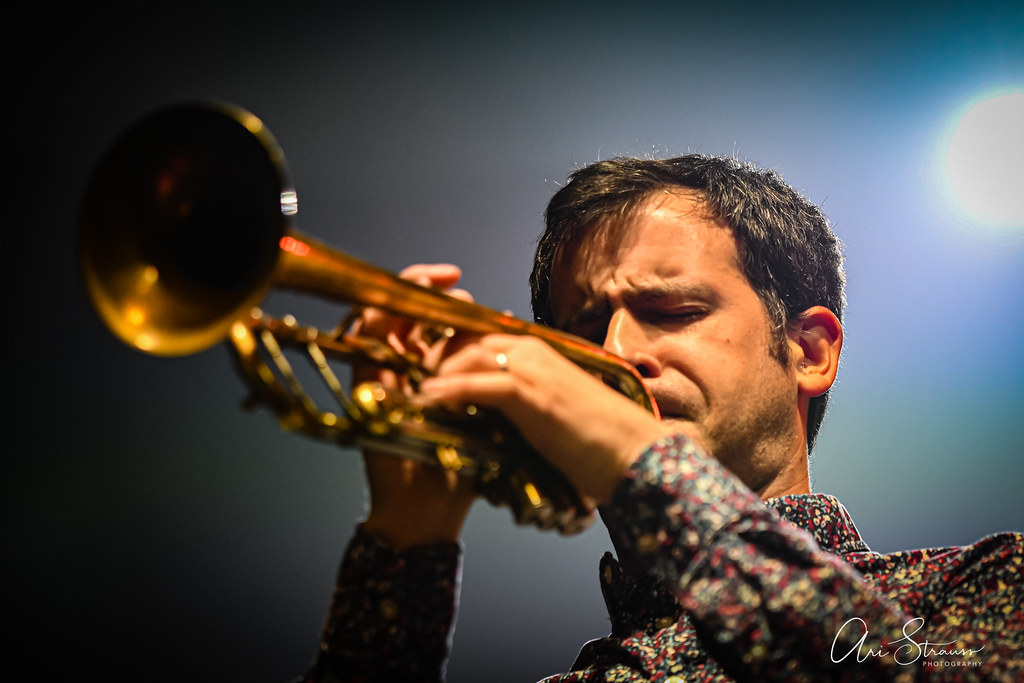 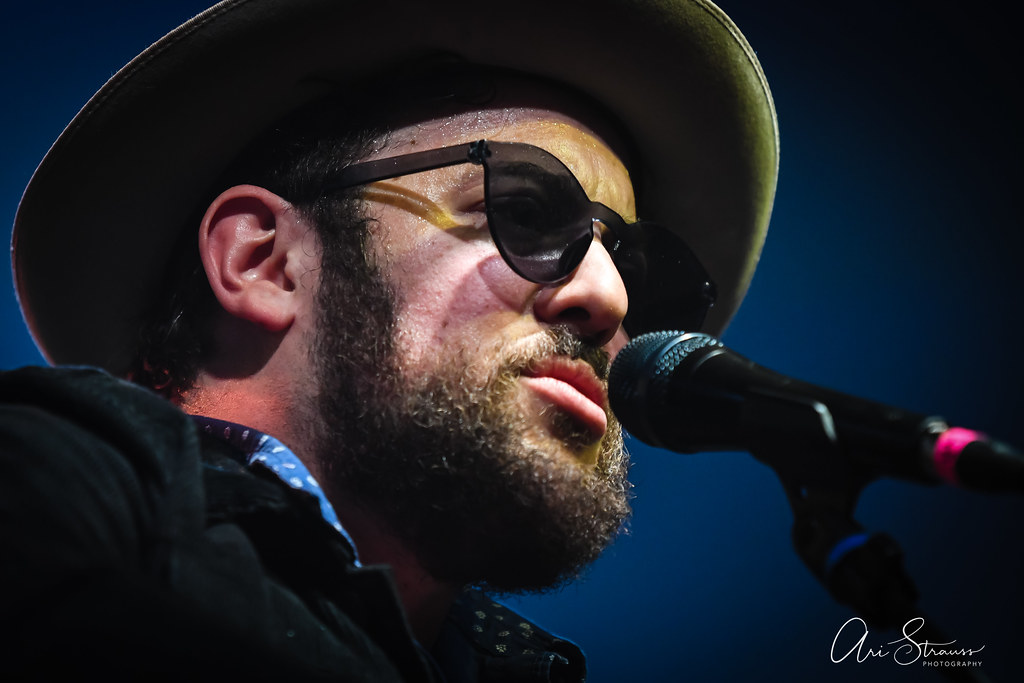 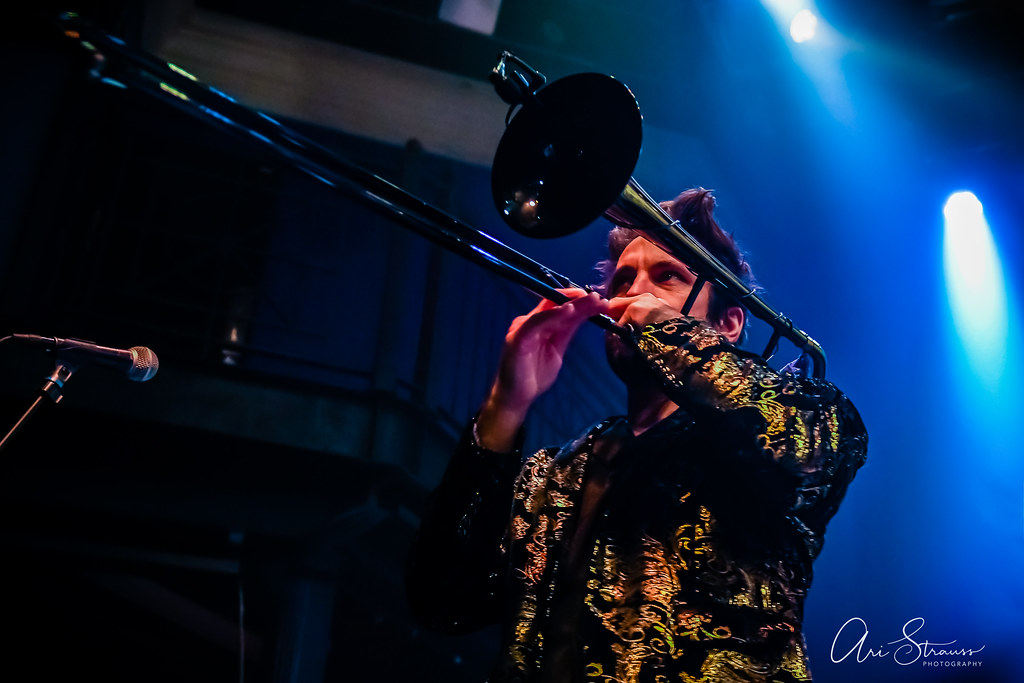 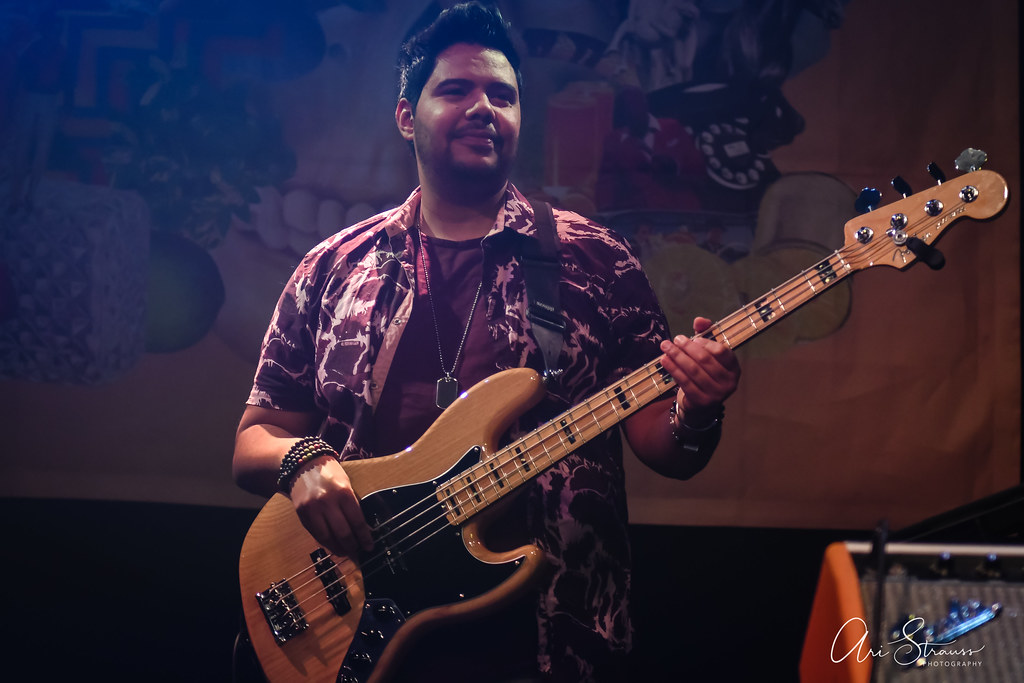