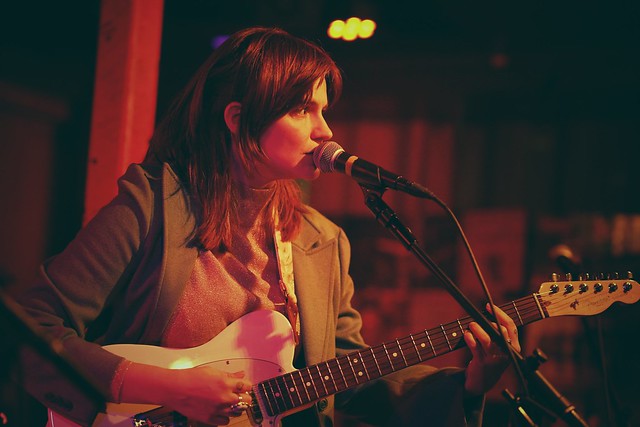 Some musicians are taken off guard playing downstairs for the first time at Songbyrd Music House, a narrow room with low ceilings and a small stage dubbed the “Byrd Cage,” kind of like the old tavern venue in your college town.

But on Feb. 4, Erin Rae took the stage as a confident, beaming guitarslinger with a bright smile and a charisma that magnetized the audience’s attention while she carefully double-checked the tuning on her instrument.

A native Tennessean who grew up the daughter of folk singers and by the age of 16 was performing in Nashville coffee shops, Erin — whose full name is Erin Rae McKaskle — was playing her first gig of the year and she had her work cut out as the supporting act for celestial folk powerhouse Bonny Light Horseman, one of several high-profile openers on the group’s inaugural tour.

Razor sharp in a vintage sharkskin suit with a fresh bounce in her hair, Erin was also displaying her remarkable sense of style for her first performance of the decade. Anyone who has seen her previously was likely in awe not only of her grace and her dignity, but also of her thoughtfully classic wardrobe and perfectly matched hairstyles.

With the introductory strum of “Grand Scheme,” the opening track on Erin’s 2018 LP Putting on Airs, the room was silenced by her patient ambiance and the broad hum of her Fender Telecaster. The initial line of “Grand Scheme” proposes “let’s talk until there’s no hard feelings,” and that placement felt intentional as it relaxed the Song Byrd crowd into a set that would include other cuts off the same critically acclaimed album.

The second song of the set, “Can’t Cut Loose” is a tender waltz that documents an interpersonal longing for a forbidden love that was once completely free but is now compromised or even suppressed by societal forces. To keep herself from chasing the “dream,” and to “do right, not wrong,” Erin sings about establishing “rules” while still yearning to unlock her thoughts.

Stream Putting on Airs by Erin Rae on Spotify:

A new song in the works, perhaps for her next album, Erin performed “California Belongs to You,” a tune she said was about good things on the way and that encourages looking at the bigger picture of life. Finding chords that emulate the waves of a rising tide, Erin sang “I never could be true, so I find other things to do.”

Characterized by its pop rhythm, “Love Like Before” was written about being content wherever you might be and however you might feel. Its lyrics unfold this message through the stream of consciousness of a woman who searches for love, only to realize she had it within her all along.

One of the most powerful songs on Putting on Airs, “Bad Mind” is a heartbreaking look into struggles and fears of a young woman coping with her own sexuality that, despite being perfectly natural, is likely to bring scorn from a people and a place — “the south” — already causing her to feel isolated and oppressed. Her own courage to celebrate her true feelings as opposed to concealing them turns out to be the antidote to her own confused perception of a “bad mind.”

This song, like others she wrote for the album Putting on Airs, showcased Erin’s angelic, soothing voice that somehow echoed in a packed Byrd Cage. It was crisp and golden, as if she was raised strictly on raw honey, lemons and magical tea. She radiated warmth and her delivery resonated as if it came from one of your own dreams.

Erin stopped short discussing the origins of the title track “Putting on Airs,” saying instead that she preferred to “keep it light on a Tuesday night.” But a glaze in her eyes hinted at how deeply she is connected to the words of her songs.

And though Erin steered out of what she hinted at being a darker territory, there was no mistaking the grandeur of her lyrics, the troubling realities they address and the heart-wrenching imagery they evoke.

Before playing the mystical “Wild Blue Wind,” she shared an older male relative’s general overall assessment of humans: “most of us ain’t right.” He was, Erin pointed out, commenting on the “varying places we all land on the mental health spectrum,” and his frank if not accurate take inspired the song and its chorus: “He’s gone out into the wild blue wind crazy again.”

Closing her set with “The Real Thing,” Erin shared some of her most profound words about being true to one’s self in the verse: “It’s funny, like the way we are as people. Always want to catch the eye of a star. Just to get a nod and smile, to say you’re going to go so far.”

Using her songwriting as a conduit for healing and reflection, Erin masterfully blends arrangements in the folk form of the 1970s, adorned with the contrasting textures of country life in the south and painted with the stories of women living there.

While it seems daunting to find separation from the impressive legion of musicians who have at any point blossomed in Nashville and quickly launched a successful career, Erin appears to be way out in front of the pack thanks in large part to her authenticity.

Having recorded and performed earlier in her career with a Nashville-based group as Erin Rae and the Meanwhiles, Erin seems to have gained steam over the course of the past two years touring in support of her own album.

Last spring, she toured as the opening act for Hiss Golden Messenger’s solo tour and, with heralded performances at the Newport Folk Festival and Americanafest in the summer, angled her trajectory as a rising star on the DIY music scene.

Erin’s also part of a growingly influential circle of female musicians who call Nashville home, and she’s been invited to play with a long list of country, bluegrass and indie rock forces, like last year at the Luck Mansion where she joined Mark O’Connor and Jonathan Wilson.

Strikingly balanced with hope and sadness, joy and despair, the emotions and stories of Erin’s music seem wholly real and correlated to her own personal life. It’s music that already came of age and is for living life the way you never thought you could — music to help you abandon regrets and revere any happiness you can muster with a heightened sense of self awareness.

As the Songbyrd patrons likely couldn’t help but examine Erin’s compelling illustrations and words at a deeper level, they unquestionably left in full astonishment of the elegance and the artistry of her sounds.

Here are some pictures of Erin Rae performing at Songbyrd Music House on Feb. 4, 2020. All photos copyright and courtesy of Casey Vock. 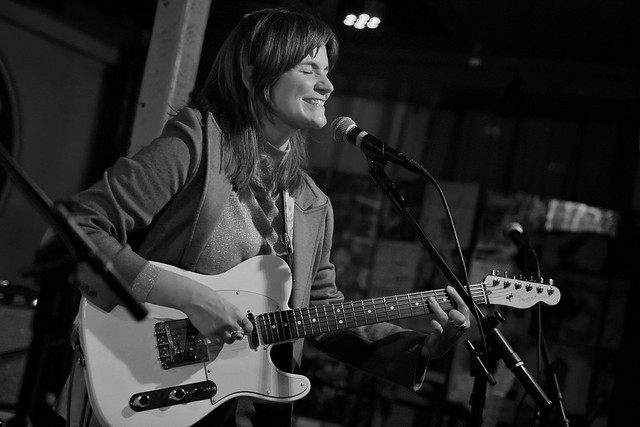 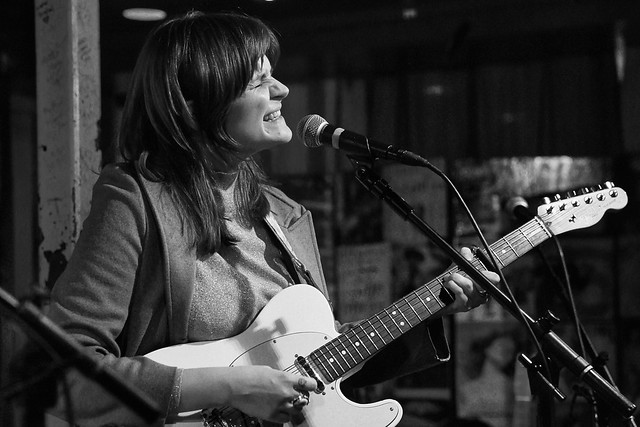 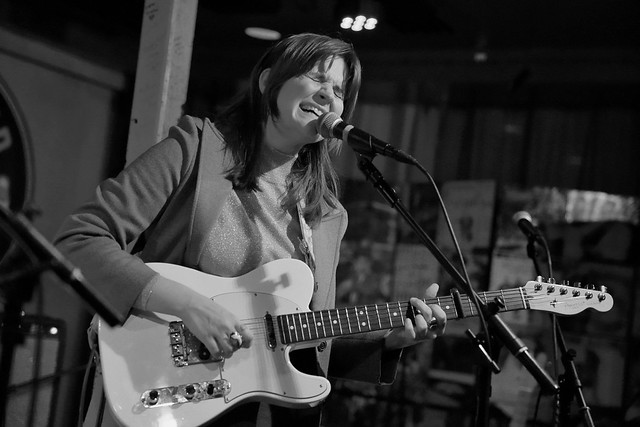 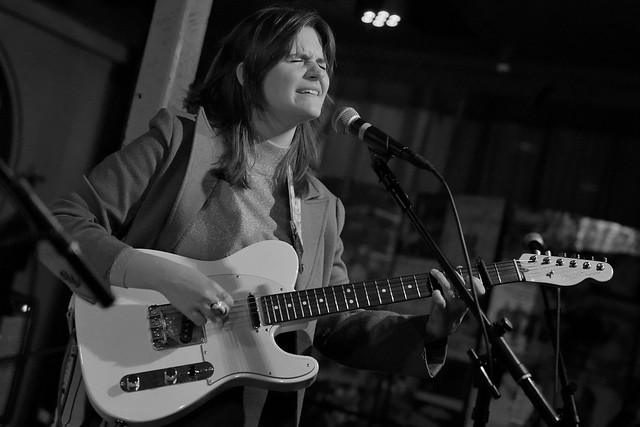 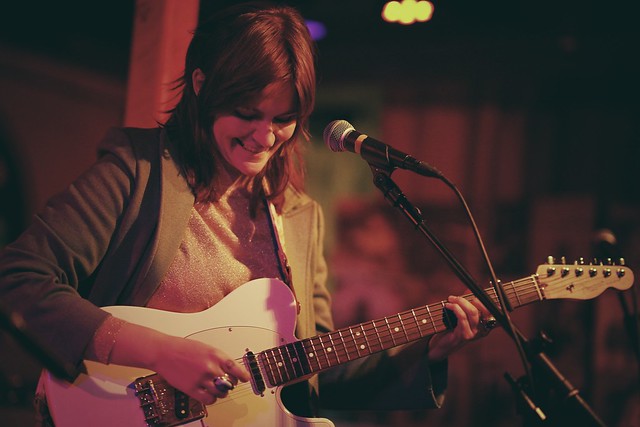