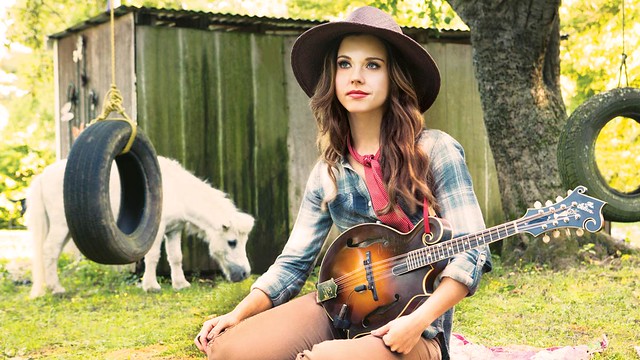 In her second appearance at the Strathmore Music Center, mandolin virtuoso Sierra Hull and her ultra-talented band recently opened for ukulele master Jake Shimabukuro. The former child prodigy, who recorded her first album at the age of 11, packed a lot of variety into her set, with vocal and instrumental numbers, as well as solo pieces where she accompanied herself on the acoustic guitar.

On Feb. 13, the set opened with Sierra singing about learning to trust herself, followed by an instrumental number. As the band started to play the third song, a piece from her new album, 25 Trips, which will be released on Feb. 27, the microphone let out a piercing sound. “That’s not on the album,” Sierra said, “but this really epic fiddle intro is.”

Next up was a trio of older songs, “Middle of the Woods,” “Escape,” and the “In-Between.” “The In-Between” began with a funky bass and included fiddle and guitar solo.

As the band left the stage, Sierra switched from mandolin to acoustic guitar. Although, as she explained, she frequently picks up the instrument to play around the house, she hadn’t traveled with one in some time. Sierra told the audience that she wrote “Everybody’s Talkin’” toward the end of the recording process, and she hopes that “anyone who has social media can relate.”

The band returned to the stage to back her up on two more new songs, “25 Trips” and the Shakespeare-influenced “Poison” is influenced by Shakespeare. Switching to electric mandolin, Sierra told the audience that the next song “became a serious earworm for me.” The band launched into a cover of “Mad World,” written by Tears for Fears, as it plays in the film Donnie Darko when arranged by Gary Jules, with a sizzling guitar solo and some nice call-and-response between the guitar and bass.

The set wrapped up with an original song, “Weighted Mind, “ and a cover of Rod Stewart’s “People Get Ready” that had the audience clapping along to the beat. The set fluidly mixed rock and bluegrass, pushing the string tradition toward new vistas. The solos were on fire, and Sierra’s vocals were strong and clear. The new album promises to be a real gem.