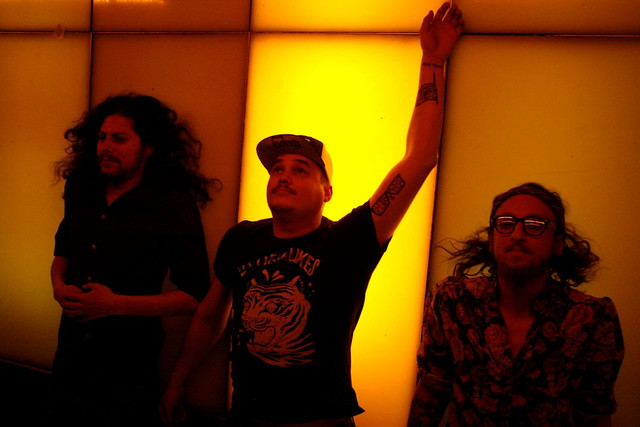 The Yawpers (Photo by Megan Holmes)

On Human Question, lead singer and guitarist Nate Cook writes his way out of trauma, rather than wallowing in it, as was his self-destructive formula in the past. “I wanted to take a crack at using these songs as therapy, really,” Nate said. “I think I’ve always been inclined to write more towards the dregs of my psyche, and explore my depressions and trauma, rather than describe a way out.”

The self-reflection engages the band’s trademark dangerous, emotionally fraught choogle, and the listener is constantly kept on edge, not knowing when to brace for a bombastic impact or lean back and enjoy the ride.

Watch a live music video for “Reason to Believe” by The Yawpers on YouTube:

Through their first three albums, the group divined a signature style — what Pitchfork described as “an expansive vision of rock ‘n’ roll, one that cherrypicks from various folk traditions: punk, rockabilly, blues, whatever they might have on hand or find in the trash.”

The sound is a front-heavy, groovy, fire and brimstone punk-blues overlying a dynamic and metaphysical roots rock. On their fourth album Human Question, the Denver trio zooms out to a more vast and accessible stylistic and spiritual universe. The 38-minute thrill ride generates growth and cathartic self-reflection for audience and performer alike. If there was justice in this world, The Yawpers would be the savior that rock-n-roll didn’t know it was waiting for.