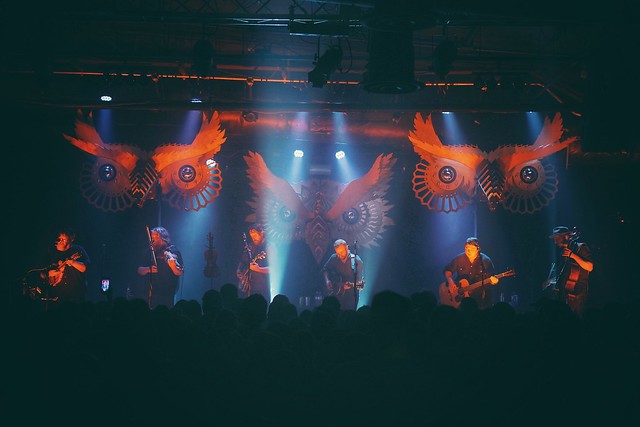 Trampled by Turtles performs at Baltimore Soundstage on Feb. 22, 2020. (Photo by Casey Vock)

What separates one band from the next might be the degree to which it challenges itself within the confines of whatever genre it is pigeonholed — and exercising creativity while respecting particular forms and traditions of your craft isn’t always easy.

For going on two decades, Duluth, Minnesota-based Trampled by Turtles has earned a reputation in the studio and on the road for testing the upper limits of bluegrass power and tempo while simultaneously honing the sweetest harmonies to ever come out of the Zenith City.

Founded in 2003, Trampled by Turtles is largely influenced by folk, rock — even rap and other music popularized during the MTV era. The band has released eight full-length albums and a healthy offering of singles and covers that celebrate the traditional bluegrass playing style but pay homage to a wide range of additional sounds.

The unmistakable high, lonesome character of TBT’s studio work has established the band as a force on the bluegrass charts — the 2010 release Palomino was in the chart category top 10 for 52 consecutive weeks.

TBT has toured religiously and appeared at major festivals like the Telluride Bluegrass Festival and the Newport Folk Festival, and the band had one of its hits — the 2005 track “Codeine” — licensed for a major video game, providing an auxiliary route to the ears of listeners.

Together, these half dozen gentlemen create a robust blend of sounds thanks to an incredible synergy that they put on display recently at Baltimore Soundstage. Performing to a sold-out crowd on Feb. 22, Dave and company delivered a spirit-lifting, evocative set that sampled the group’s vast catalogue going back more than 17 years.

Absorbed and wary, with a voice that rings as forever heartbroken, Dave Simonett is testudinate in demeanor. His sorrowful vocals are reminiscent of early alt-country singers, but also have a Dion DiMucci-like nostalgic condition.

Simonett set the tone for the night with the initial lines of the opener, “Midnight on the Interstate” — a beautiful blend of his gentle words along with a sweeping mandolin melody and gorgeous ascending complementary notes on the fiddle. His eyes lifted from his guitar as he cautiously approached the mic with the lyrics: “Late night, midnight on the interstate, and I didn’t feel so great, until I saw the city.”

He’d get to share his some of the more recent tracks in the TBT playbook, including “Kelly’s Bar,” a stomping jig that featured all the strings on stage meeting in a bottleneck before each instrument dug into its own rapid, parallel groove.

Stream Life Is Good on the Open Road by Trampled by Turtles on Spotify:

Like some of the standout bluegrass frontmen of yesteryear, Simonett rings his voice like an instrument to achieve a compelling coaction with his bandmates best heard in some of their most popular songs, like “Wait So Long” and the dark loner anthem “Codeine.”

Three massive, gleaming owl heads — an impressive work of art in itself — served as the stage backdrop and, along with an elaborate light array that matched the pace of the music, transformed the venue into a kaleidoscopic nest.

A TBT newcomer would have likely awed at the band’s devoted following — one father-son tandem had driven several hours to catch the show — but they might also have admired the rugged, distinctly Upper Midwestern character that seems to color everything the band does — everything from their working-man’s fashion sense to the natural elements used in their album and stage designs.

TBT’s recognizable culture takes shape in the form of a packed house most nights, fans wholly attentive, lyrics on the tip of their tongues before Simonett can even get them out in some instances.

That frequently was the case in Baltimore as the group worked through a well-spread batch of tracks that showcased the abilities of the band as dynamic individuals and collectively as a team.

“Widower’s Heart,” from the 2012 release Stars and Satellites, was one of the most moving songs of the night at Soundstage, and the crowd was as ready for this weeping ballad as it was for more buoyant tracks.

A pleading, broken hearted monologue, the song showcased Ryan’s eye-watering capacity to infinitely drag tender notes out of the violin. As the song builds, the lyrics beg the rain: “come wash me and keep me and take me away.”

Stream Stars and Satellites by Trampled by Turtles on Spotify:

Stacking the left side of the stage, Erik and Ryan form a particularly explosive string tandem — in “Kelly’s Bar,” the pair cranked breakneck rhythms in between one another until they met in a thunderous clap.

“The Middle,” another track from the 2018 album, Life Is Good On the Open Road, was another opportunity to amalgamate all the strings on stage, and here Carroll’s swift and crisp banjo picking provided yet another crucial layer to the band’s sound.

Sharing an appropriate story of origin, Erik took a moment before the next song to explain that his mandolin, acquired some 15 years back, lived its first life in Baltimore and arrived to him in a case spattered with Orioles stickers — a well-received anecdote, indeed.

Riding the Charm City’s exuberance, TBT delivered their own vigorous take on “Streets of Baltimore” — a Bobby Bare classic more recently popularized by Del McCoury, who spent a great deal of his early days playing there.

Perhaps underappreciated in the mix, Tim’s acoustic bass work provides the chugging, freight railroad sense of urgency in some of the band’s music, like the hauling “Annihilate,” which has a rapid strut and tornado of strings that seem to be hallmarks of the most beloved TBT jams.

Also potentially overshadowed, focused and sober in expression, Eamon’s haunting, cavernous chords filled out the texture of the band’s sound, regardless of measure. He augments songs written before his time with the band, like “Bloodshot Eyes,” now unforgettable for its heart-wrenching distillation of violin, cello and harmonica, provided by Simonett.

Down the stretch at Soundstage, TBT’s song selection spoke to a band that is in fact more than a bluegrass unit with rock-and-roll accents — or vice versa.

The first of a three-tune encore, TBT covered The Faces classic “Ooh La La,” which, in its live version, invited the six men to harmonize, and they were joined by the enthusiastic audience for the chorus — a surreal moment that brought the entire room together in song. One of five song’s covered on last year’s Sigourney Fever EP, it also provided a window into the band’s range of influences.

Launching seamlessly into “Sounds Like a Movie,” the all-hands-on-deck string breakdown played out like a marathon, a full-throttle race between bandmates that seemed on an infinite track of intensification until everyone crossed the finish line at precisely the same moment.

Dusting off a track on the 2004 TBT debut Songs from a Ghost Town, the band delivered a beautifully poetic ballad that helped it develop its more somber inflections. Group ownership is asserted over the nomadic, booze-soaked emotions that resonate in Simonett’s poignant lyrics: “So whiskey, won’t you come and take my troubles, ‘cause I can’t seem to do it on my own. In the morning there is hours and infinity, the starlit evening’s come to take me home.”

As TBT’s brand has strengthened over the span of its career, other opportunities have arisen to expose the group’s style and sound to more fans as the members all pursue additional musical projects, most notably Simonett’s Dead Man Winter outfit, which will put out a new album this month.

But by consistently pounding the pavement and putting in the studio time, and by staying tight-knit, TBT continues to refine one of the best blends of bluegrass and rock in contemporary music.

Here are some photos of Trampled By Turtles performing at Baltimore Soundstage on Feb. 22, 2020. All photos copyright and courtesy Casey Vock. 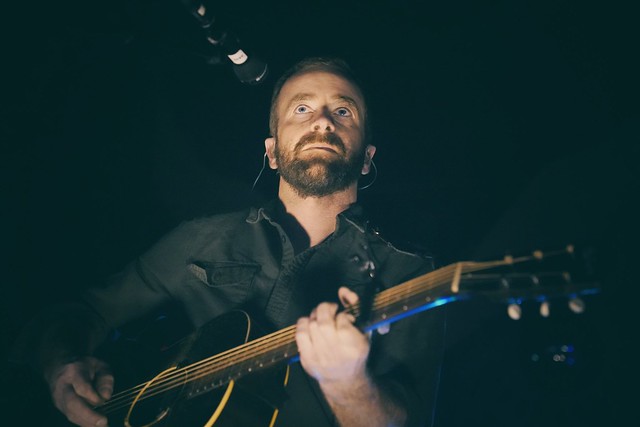 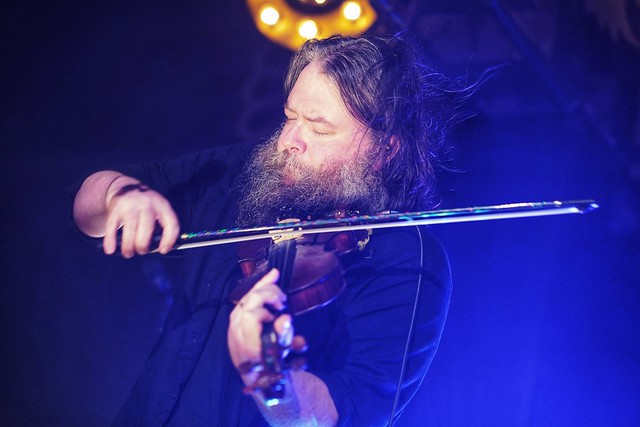 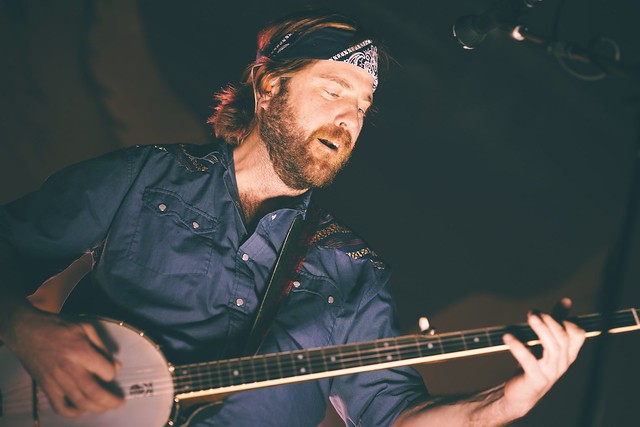 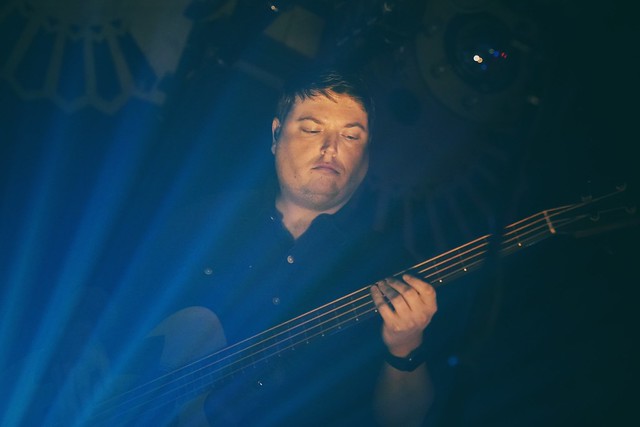 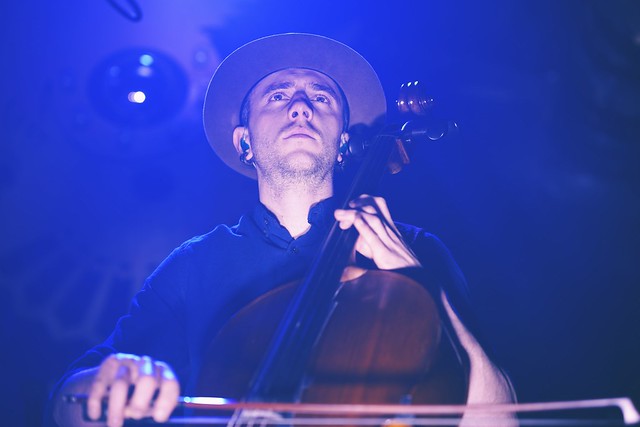 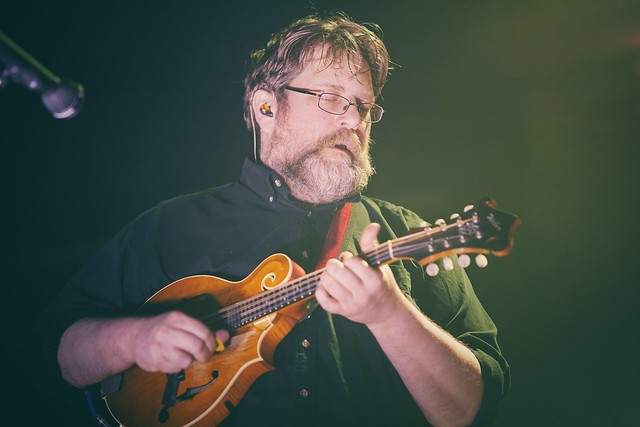 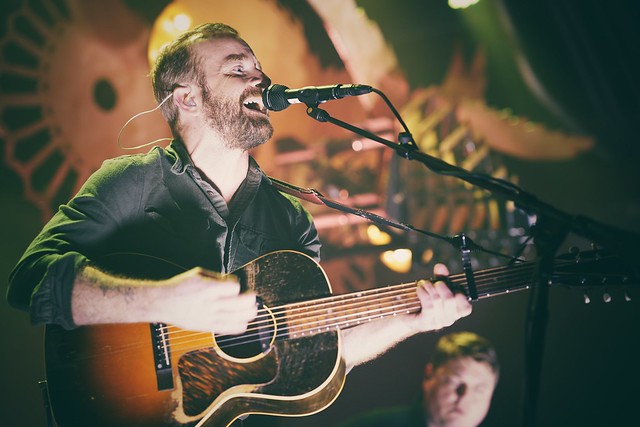 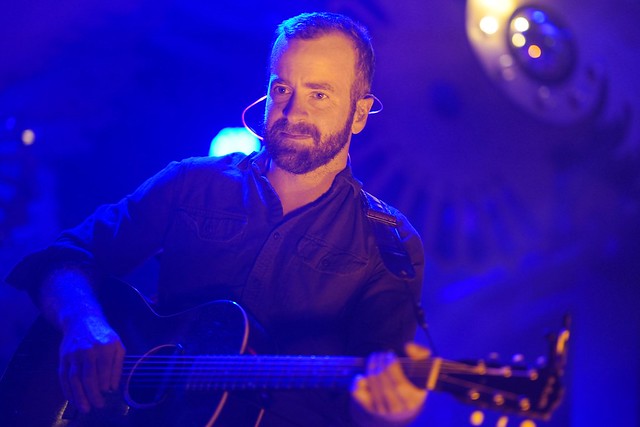 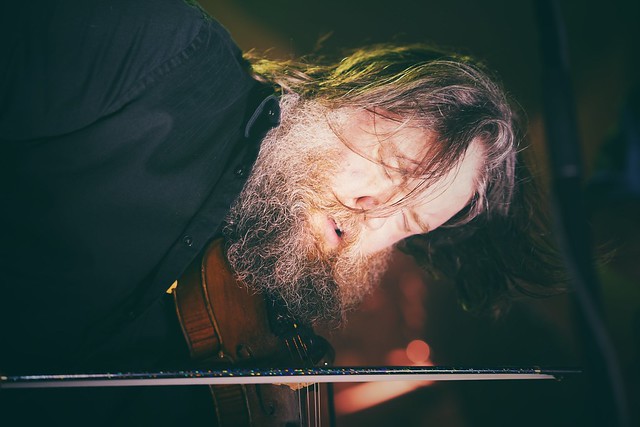 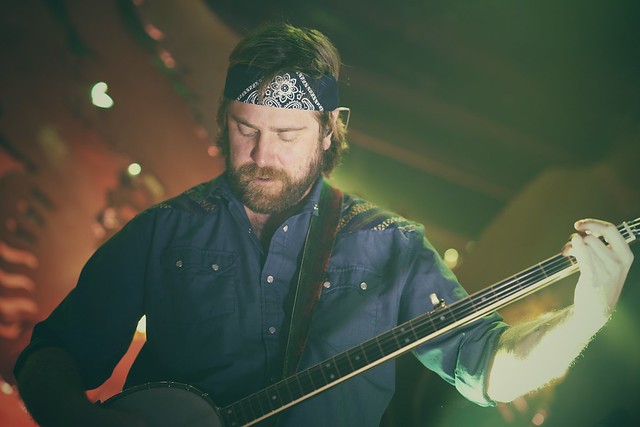 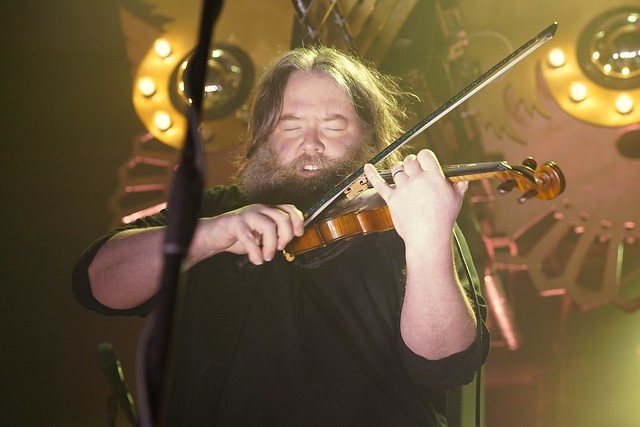 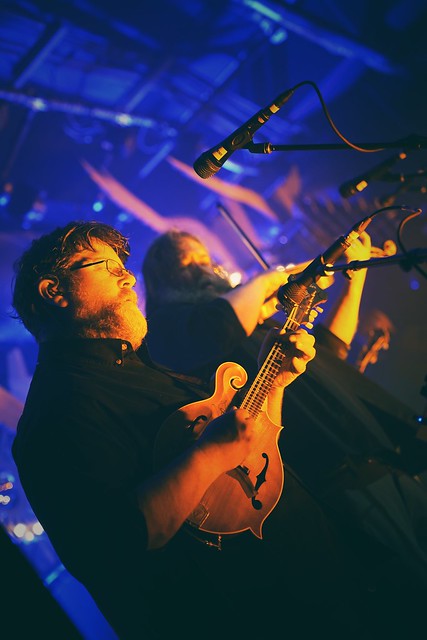 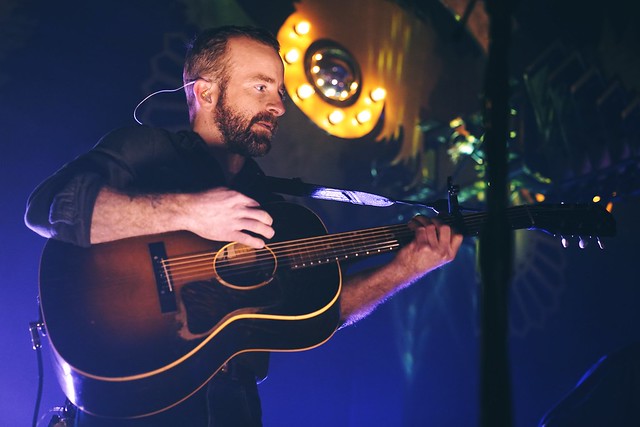 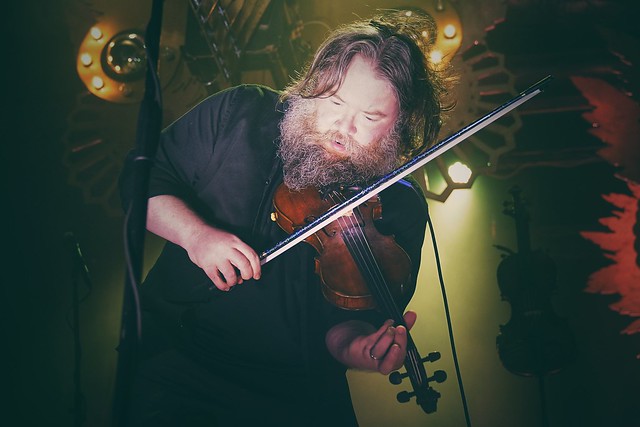 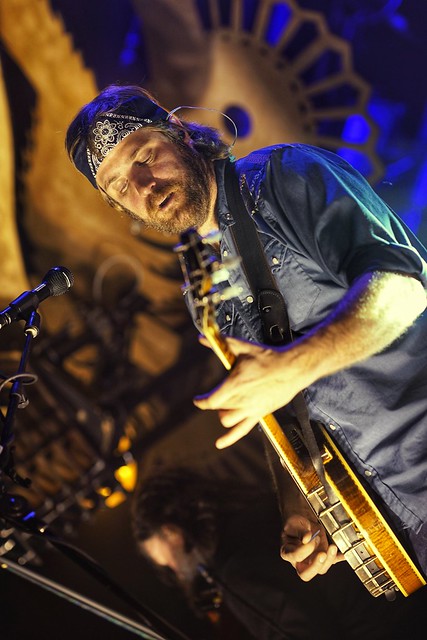 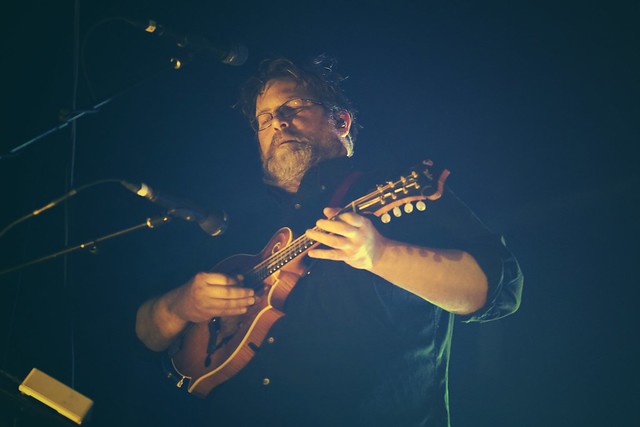 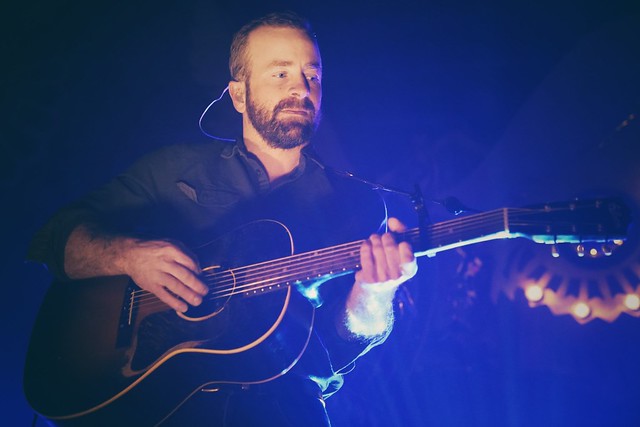 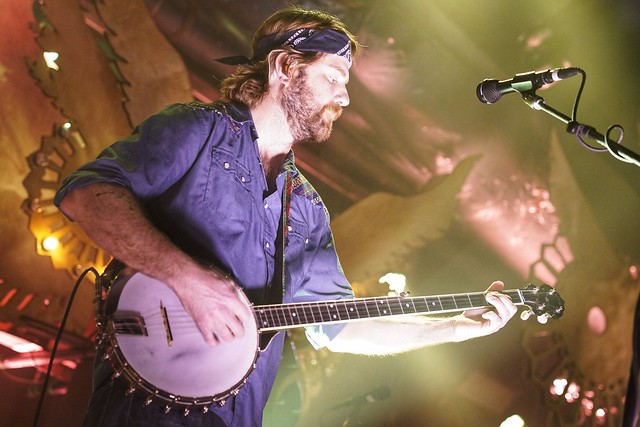 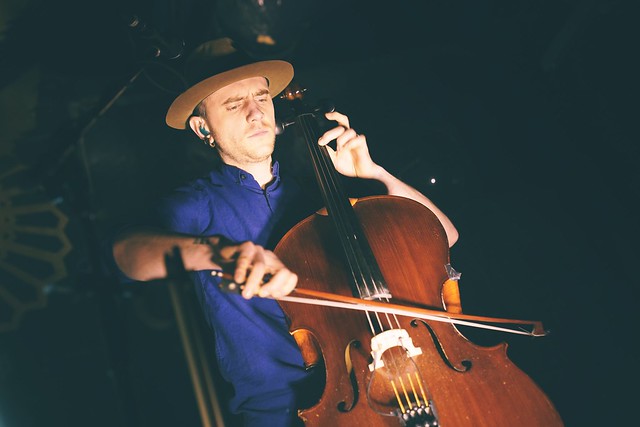 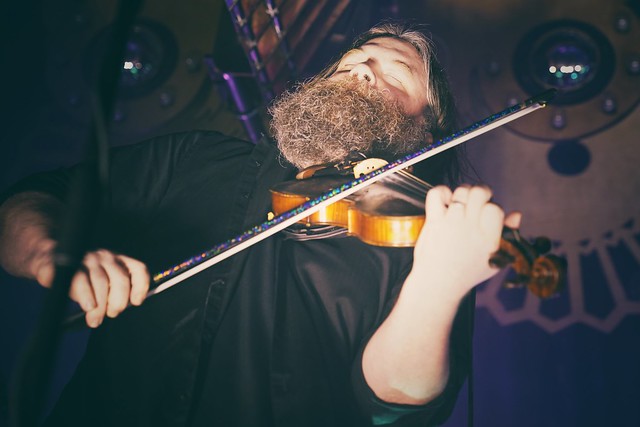 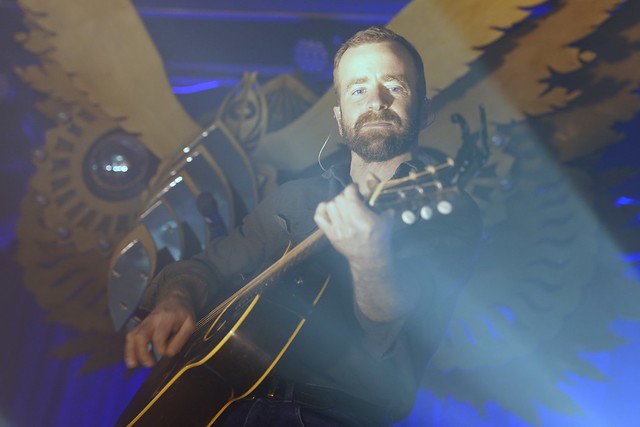 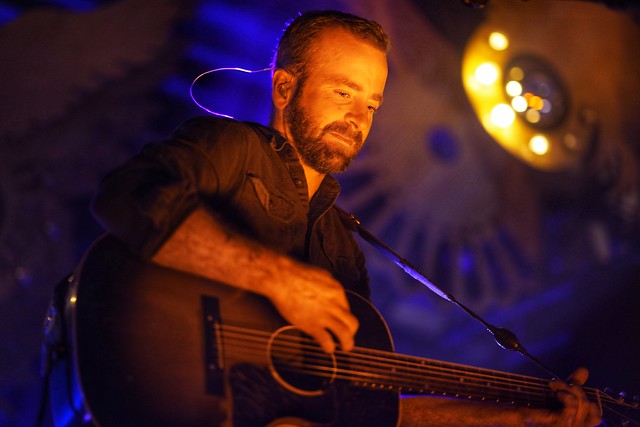 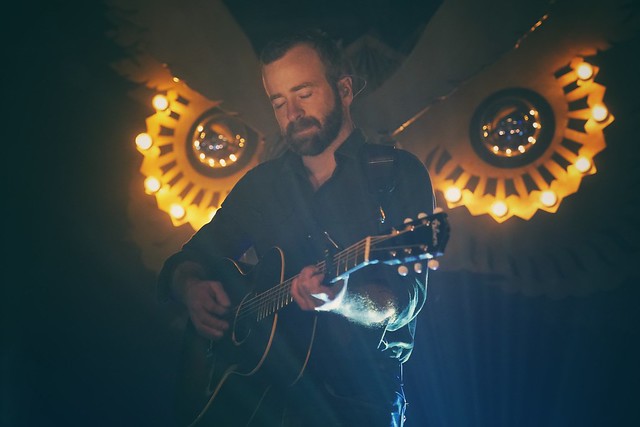 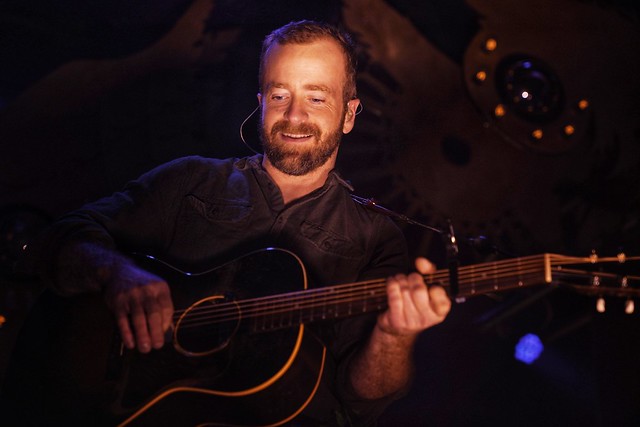 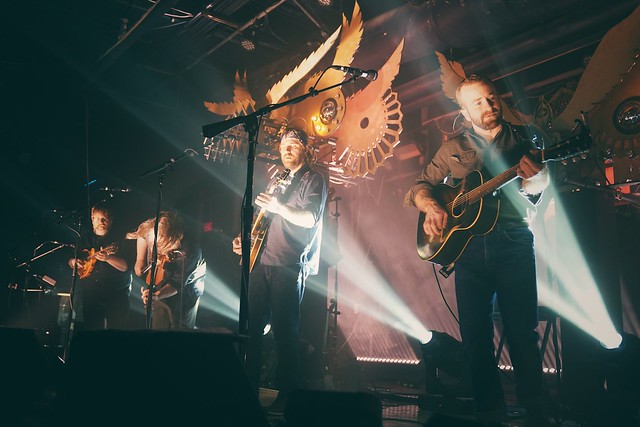