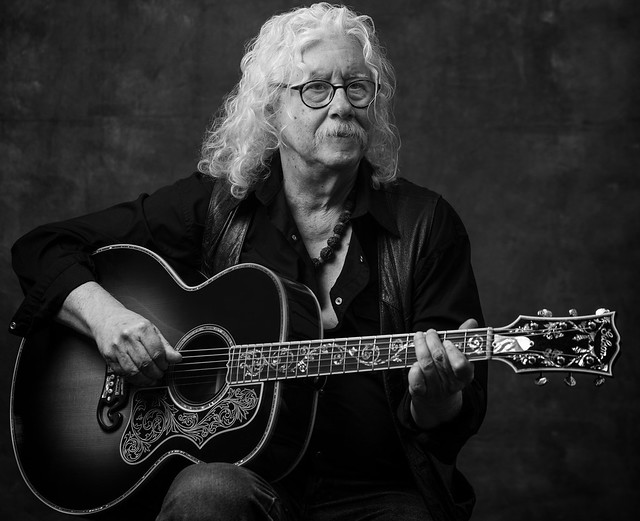 Folk legend Arlo Guthrie celebrated a lifetime of music at The Birchmere on a recent evening billed as a commemoration of his debut 1967 album, Alice’s Restaurant. His set featured the titular “Alice’s Restaurant,” a 20-minute-or-so story song that involves litter, jail, and the draft. “If I could’ve imagined that song would be popular,” Arlo told the audience, “I would have made it a hell of a lot shorter.

Before getting to the famous song on Feb. 29, Arlo shared “The Motorcycle Song” from the same album. “Sometimes you get stuck singing this stuff for the rest of your life,” he commented. “It doesn’t matter if it’s any good or not.”

Much of Arlo’s set consisted of covers from the folk canon. He opened with Bob Dylan’s “The Times They Are A-Changing,” and the audience applauded when he asked them to “heed the call.”

Covering Pete Seeger’s “The Garden Song,” Arlo recalled that in 40 years of performing together, they never planned a show. When he was into very advanced age, Pete would say to Arlo that he only knew a very few songs, but Arlo always managed to jog his memory of more songs by playing them on stage. Arlo also played Pete’s “Deep Blue Sea.”

The set also included a cover of country bluesman Josh White, and Steve Goodman’s “City of New Orleans.” Arlo told the story of how Steve approached him in a bar one night, wanting to pitch a song. He told Steve that, if he bought him a beer, he could play for as long as it took him to drink it. Arlo also talked about how the song has been covered a number of times, and how “it’s unusual for a song to become that popular.”

It was fitting, then, that he brought out the opening act, Folk Uke, to accompany him for the tune. The duo consists of his daughter Cathy and Amy Nelson — the daughter of Willie, who released his cover of “City Of New Orleans” in 1978. The two ladies provided a hilarious opening set, their sweet voices were a marked contrast to the lyrics of their ribald, comedic songs.

Of course, Arlo is the son of the great Woody Guthrie, which almost obliges him to cover his father’s work. He did that with “This Land Is Your Land.” When he was in grade school, he was stunned when, one day, his school had a sing-along to it. It had never dawned on him, being a youngster, that the song was at all known outside of his household, so he had never learned the words. But when he got home, Arlo told his father about the sing-along, and Woody taught him the guitar chords and the lyrics.

Arlo included two of his other original songs on Saturday. One was “Please Don’t Talk About Me When I’m Gone”; the other, “My Peace,” he played as his encore. It was a delightful evening of tradition, family, and folk music by an essential American artist.