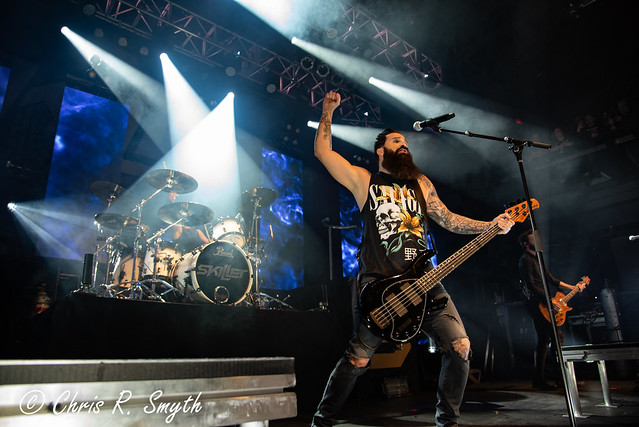 After rocking the city of Baltimore in the fall of 2019, Skillet returned to the area recently by playing to a jam-packed crowd at The Fillmore Silver Spring.

Mixing in hit songs “Feel Invincible,” “Hero,” and “Monster,” along with five tracks — “You Ain’t Ready,” “Legendary,” “Victorious,” “Save Me,” and “Anchor” — off their 2019 Album, Victorious, Skillet balanced a good mix of new and old music to keep the fans cheering throughout the show.

With a cellist along for the ride on this tour, Skillet put him to great use on songs like “Not Gonna Die” and “Awake And Alive” at The Fillmore Silver Spring on March 8. Toward the end of the show, all five of the members took a seat at the front of the stage for fully acoustic version of “Stars.”

Shortly before taking the stage, John Cooper, the lead singer and bassist of Skillet, sat down for an interview with Parklife DC’s Chris Smyth to discuss a life of touring and why keeping a family feeling on the road is so important.

Listen to an audio recording of the interview with John Cooper of Skillet and Chris Smyth of Parklife DC:

Chris Smyth: This is Chris Smyth here with Parklife DC speaking to the lead singer and bassist of the band Skillet, John Cooper. John, thank you so much for taking a minute to speak with me.

CS: Alright, so I actually want to start with the last time you guys came through. You did a dual headlining tour, co-headlining tour, with Alter Bridge when you came through Baltimore. How’d that tour go? How was it traveling around with those guys?

JC: Good, yeah. In fact we were laughing about it earlier because we already did our VIP meet and greet for the night, and they said “Yeah I saw you when you came to that show,” that you are referring to, it was the night that I split my pants all the way up my backside. It was like the biggest wardrobe malfunction of my 23-year career. It was really bad, there was just nothing to do about it. It wasn’t a hole, it was a rip. And we were laughing about it. But that was a great show and a really great turn out. And I’m looking forward to playing here again, and hoping not to have that sort of malfunction this time.

CS: Well that kind of brings me to my next question, and correct me if I’m wrong, but when you came through Baltimore you said you don’t play the East Coast all that often. And now you’re back in the region, the DC general area, for the second time in five months. What made you want to come back to DC?

JC: Yeah, we really don’t come to the East Coast very much, especially the Northeast. And there’s a lot of fans up here. And I don’t really know why it works that way. Sometimes you’re getting on other people’s tours and they are booking other places, you’re opening up for someone else and you don’t control booking or what have you. But I was very excited that our own tour, that we could come back, play a longer set, hopefully some deeper cuts that hopefully people want to hear. And then get your hardcore fans back out. I’m just really excited to be back for that purpose and hopefully play for some new fans too, I hope.

CS: Well how has this tour now been going? Any significant moments, memorable moments? Good or bad? Ripping the pants or not?

JC: Haha, yeah. It’s really been a great tour, this is the most fun I’ve had in several years. I like doing my own tours when we’re headlining. Opening for someone else is cool, of course. Especially if it’s a big act.

We opened for Korn a few years ago. That’s obviously good because there’s so many people, 10,000 people. We’d never draw that amount of people by ourselves or as a headliner. And that’s really cool, but when you do your own show, it’s hard to explain, you control the whole vibe of the night. And I really like that because I like making the people who tour with me, the other bands, I like a family atmosphere. That we’re all friends, everybody knows each other. It’s not about competition.

And I always find on other tours you don’t always get that vibe. You never know what you’re going to get. And I like kind of controlling the vibe of everything from the top down. And most of the bands we tour with say “Man, we’ve never been on a tour where it feels so much like family and community.” And I really enjoy that because this is a hard life. I don’t mean hard, there’s a lot harder lives than rock and roll, but the day after day after day of waking up in a brand new city, sleeping on a bus. Our bus just broke down, we didn’t have it for six days so we’re moving all of our stuff to another bus in the middle of the night.

That stuff gets old. You see new people everyday. So there is a feel of being on a tour that is not really like authentic reality. That’s what I’m trying to say. Because of that, you can learn to be pampered. You know, people clean up your dishes. People feed you. People load your stuff in. People wash your clothes. That’s not really what real life is like, and that’s why so many rock stars are, frankly, just not fun to be around. They’re jerks in real life. So we try to make this like this is real life and we’re all family and we all get along, and I like that.

So that’s a really long answer, but what I like about this tour the most, honestly, is that it’s our tour and that it feels like family.

CS: Before we started recording you mentioned that this tour is about to wrap up. What comes next? Is it just go home and take a breath? Or is there something in the works?

JC: Yeah, let see, another week left. We do have a few gigs, one-offs. We call them one-offs. We fly in to do a show or a festival. But we are taking quite a lot of time off in May and April, and then we start touring. We tour Europe again. Six weeks in Europe for the summer to kick it off. And we’re doing amazing shows in Europe now. The last five or six years things have really changed for us there. And so this summer we are playing with Foo Fighters, and Aerosmith. And it’s crazy when we go to Europe we get to play with iconic acts like that.

Stream Victorious by Skillet on Spotify:

CS: So now, Victorious came out, I don’t know six, eight months ago. Everybody is excited when the album first gets released. You’ve had a few months to play it, listen back, everything. How are you feeling about the record at this point?

JC: Yeah, I know what you mean. You feel like you finally had the baby. You been dealing with it, writing the record for two years or what have you. You know I always like all of my records, to be honest. And not in an arrogant way, but in a satisfied way. I’m satisfied with my albums. There’s always something I think I could do better. Go back and listen to it, yeah we could have done that better. We put a lot of hard work into it. And for a rock, for a musician I’m pretty good about listening to other people’s opinions if they are like “Hey, I don’t like that chorus,” I’ll keep rewriting it until there’s a consensus that most of the people like it. Because I’m a hard worker and I’m not too arrogant when it comes to my art. I try not to be any arrogant but we are still musicians and artists, (laughs) so there’s always a little bit.

But I am proud of the album. And I think it’s very authentically Skillet. I think we said what we wanted to say. It’s a very hopeful album, and I like that about Skillet. I like that I meet people every night that tell me what the songs mean to them. Tell me how a song helped them through. Last night I met somebody that said “My kid died, and this was his favorite song of yours, and it’s gotten me through it, and a few months ago came to the show.” And I hear these stories and I go oh my gosh I can’t believe that my song helped somebody like that. And so, it’s really humbling. It makes you feel small in the best way possible. Small in a good way.

CS: That’s great. Your drummer, Jen Ledger, she’s doing double duty on this tour. You have a side project, Fight the Fury. Any chance you could be working a double shift in the future? Or is there anything coming up with that band, tour, new music, anything?

JC: We actually did double duty last year. When Fight the Fury came out, we released the EP. And it’s fun. I like Fight the Fury because it’s a little bit of the harder side of me. And we did a tour with Breaking Benjamin. Breaking Benjamin is one of my favorite bands. So they had asked Skillet if we’d come out and support. What you do call it, lead support on the tour? Which I was like of course we have to, I’m a huge, huge fan. And so we toured together, but I was like but the thing is I just released Fight the Fury so is there any way we can open the tour? So Fight the Fury opened the night. Underoath was the second act, and then Skillet played. So that was kind of fun.

But it is a lot of work doing double duty. I’m up for the physical toll. But what you’re not prepared for is the head space toll. Like when you’re writing something, or you’re doing your job, you’re putting that brain power. It’s the brain power that I didn’t expect. So by the time I would get up to singing Skillet songs, for the first time in my whole career I was like trying to remember certain words. Like what are the words to this song? Which is really unusual. It’s because I had all the extra brain space. But it’s kinda quite fun. I don’t know when we will get back to Fight The Fury but I do hope to record some new Fight The Fury music in the future.

CS: As a guy who likes the heavier end of things I’m looking forward to hearing it. So that’s all I got. I really appreciate you taking a few minutes here. And thanks a lot.

JC: Good to talk to you. Thank you, man.

For more Skillet music and tourdates, visit the band’s website.

Here are some pictures of Skillet performing at The Fillmore Silver Spring on March 8, 2020. All photos copyright and courtesy of Chris Smyth. 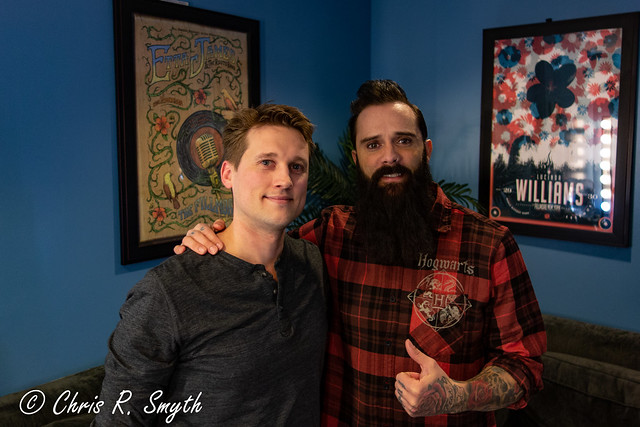 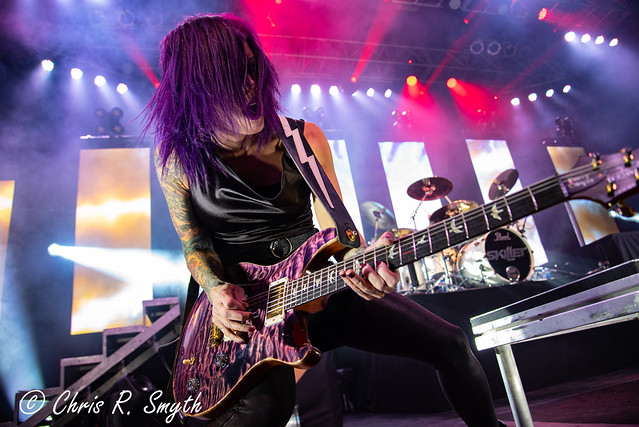 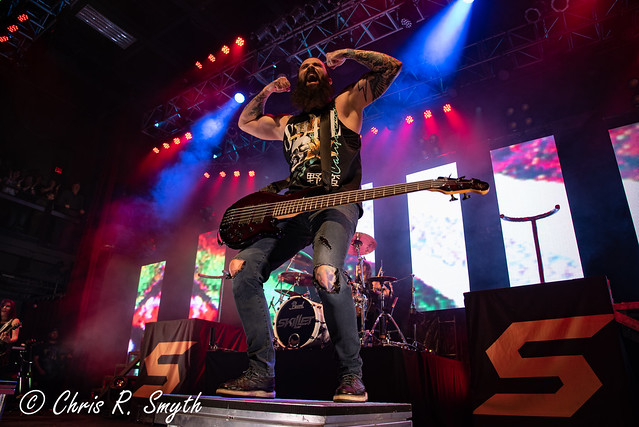 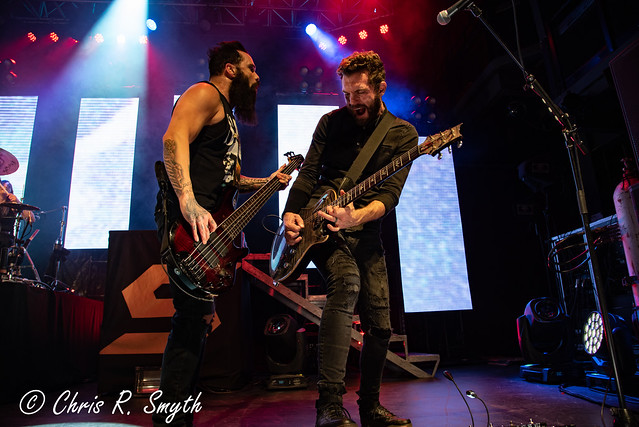 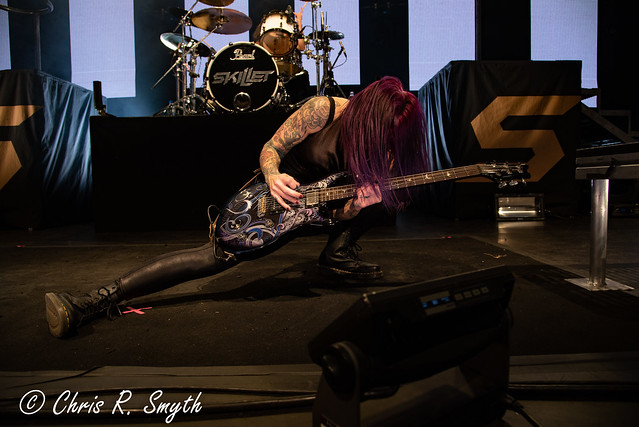 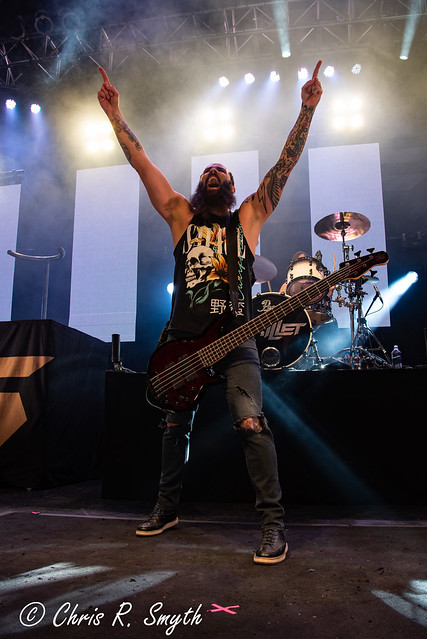 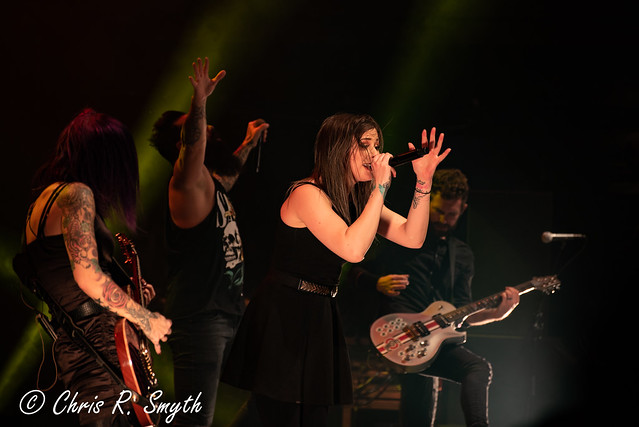 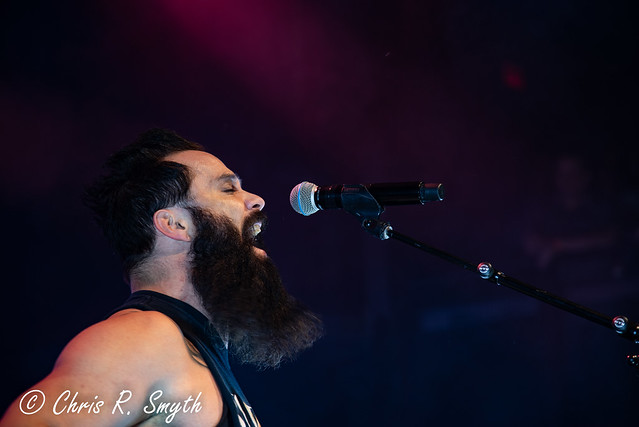 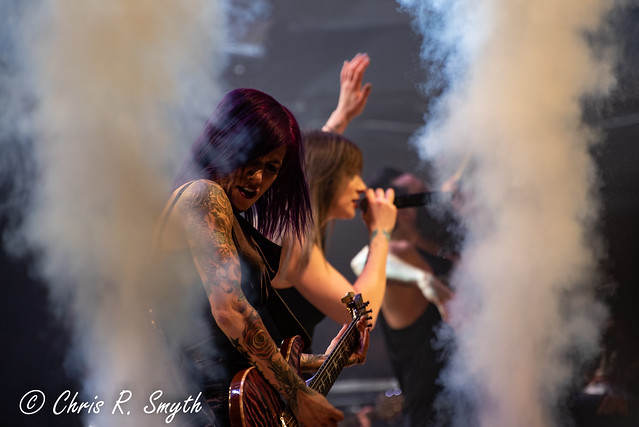 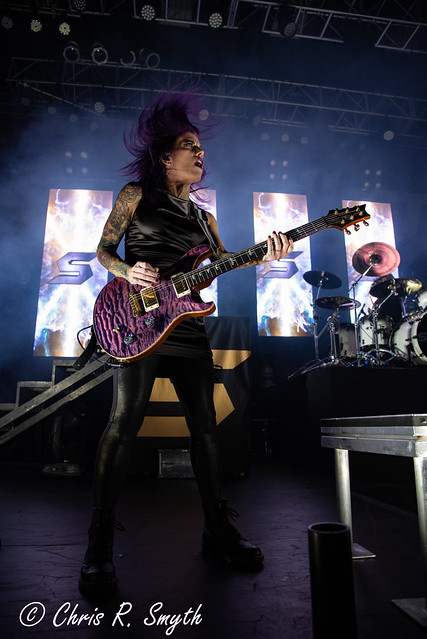 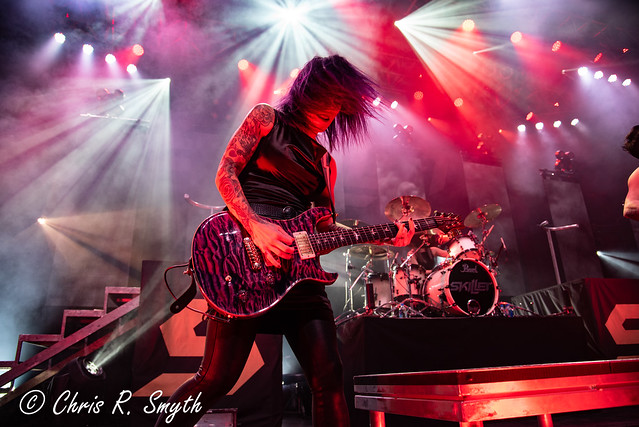 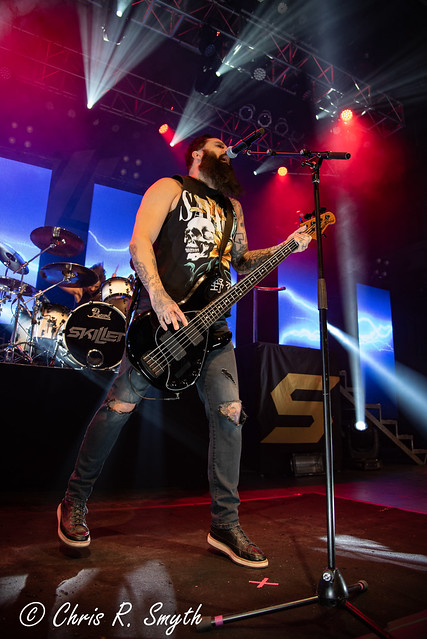 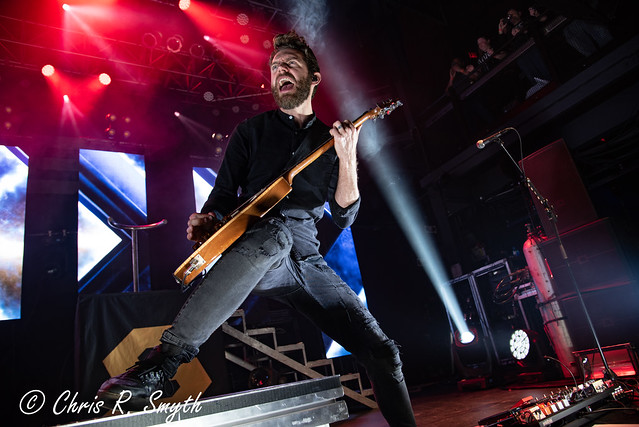 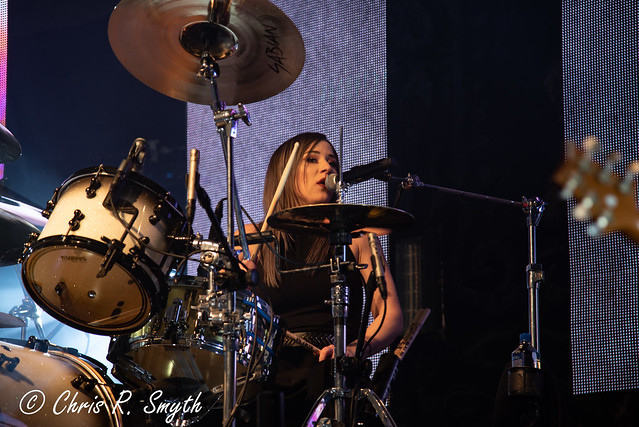 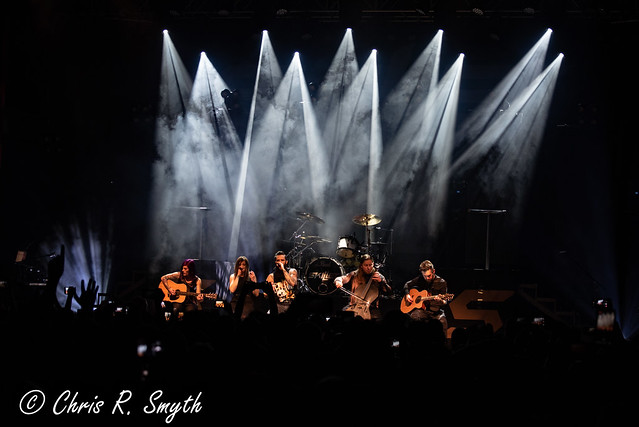 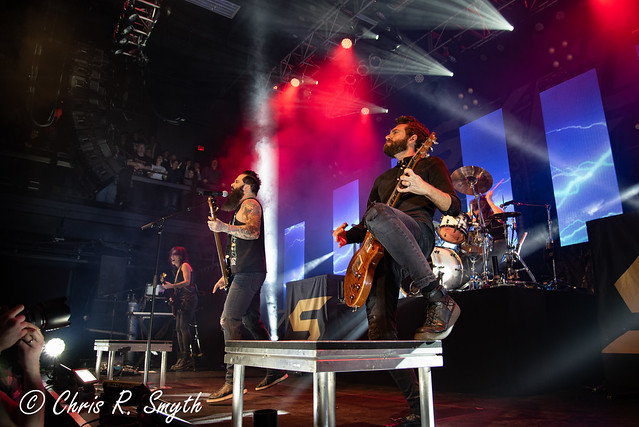 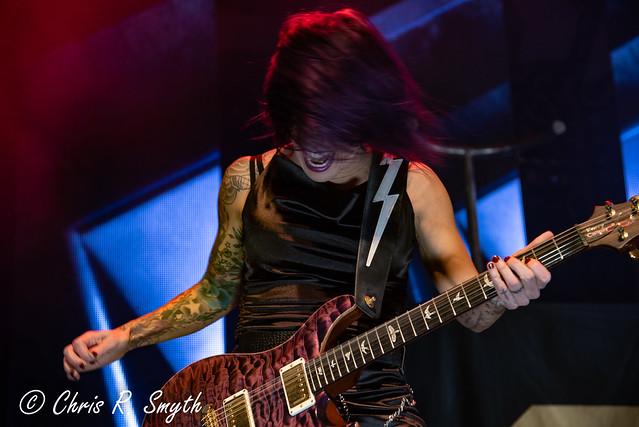 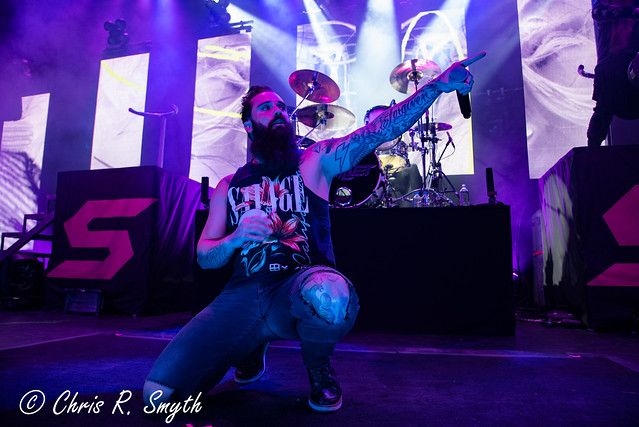 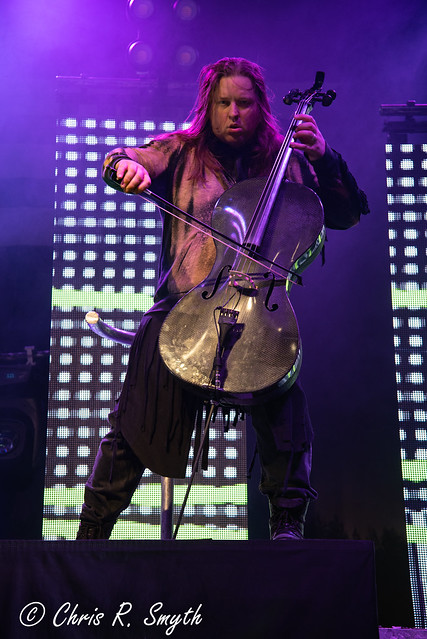 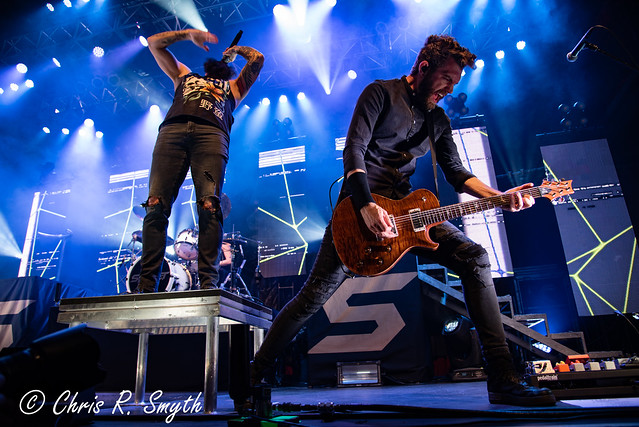 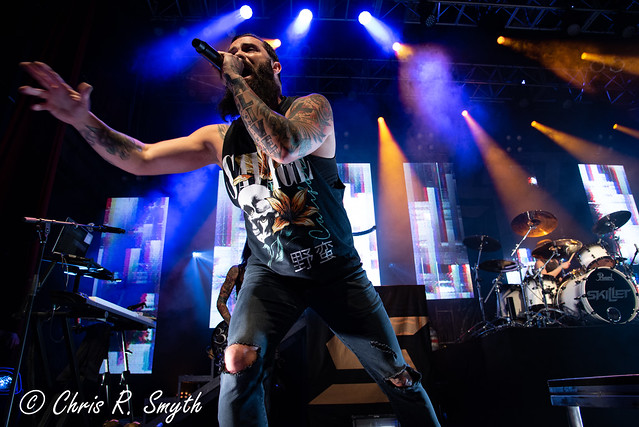 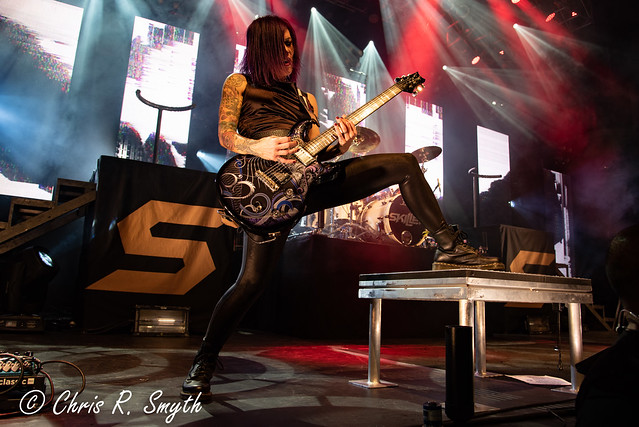 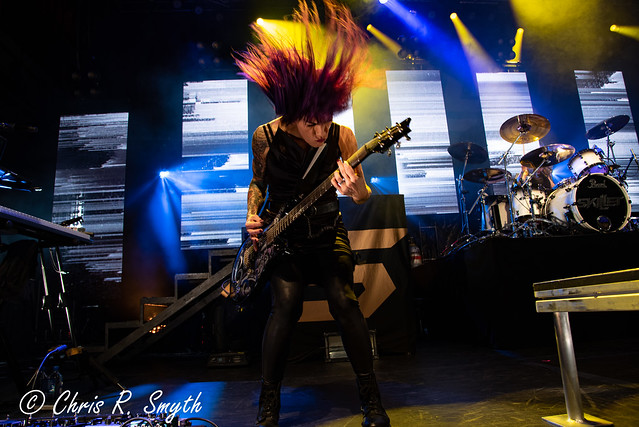