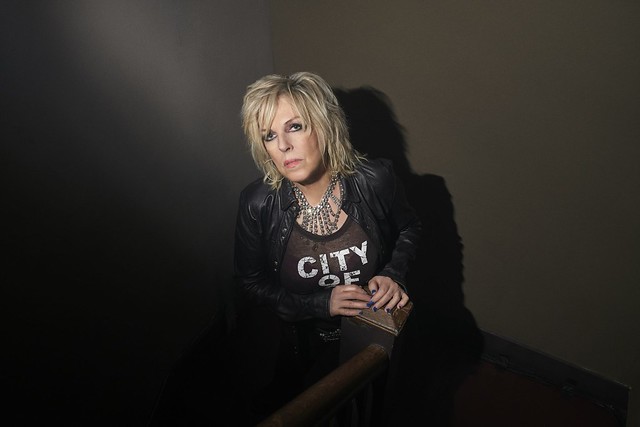 In Rolling Stone’s list of the 100 best singers, they tell the following story about Bob Dylan: “When Sam Cooke played Dylan for the young Bobby Womack, Womack said he didn’t understand it. Cooke explained that from now on, it’s not going to be about how pretty the voice is. It’s going to be about believing that the voice is telling the truth.”

Lucinda’s voice is not nearly as pretty as Mary’s. But Lucinda, as my friend Terry Klein once said to me, “Let’s you into her heart.” When she sings, you hear the truth. When she sings “Passionate Kisses,” you hear the frustration and the desire.

When Lucinda recorded her 1988 album, her career was nothing like what it was now. She was nearly 40, mostly broke, and she was working at a B Dalton’s at a mall. She was divorced from Greg Sowders, who had played drums for the pioneering alt-country band, The Long Ryders.

Lucinda has been called a “black man in a white woman’s body,” and there’s some truth to that. She started out playing acoustic blues, first on the covers collection Ramblin’, then with her own original songs, on Happy Woman Blues. Even as she pivoted toward country and folk in the late ‘80s, she always hung on to that blues spirit. At the root of both blues and country, in the vein of Hank Williams, is a spirit of lamentation, of broken hearts, loneliness, and hard times.

While written from a distinctly female perspective, “Passionate Kisses” resonates with me on a deeply personal level. I see someone else who has struggled: struggled to be recognized, acknowledged, and loved. Nothing has come easy for Lucinda, and nothing without great effort at long length.

Lucinda puts incredible time, effort, and care into her art. She’s meticulous, even a perfectionist. Her breakthrough album, 1998’s Car Wheels on a Grave Road, came out six years after her previous record, Sweet Old World. At her anniversary show for the album at the Strathmore in September, she talked about butting heads with Steve Earle, who produced. Steve, she recalled, would say, “Lucinda, you’re singing your ass off,” only for her to demand more takes, until she got a track where she wanted it.

It’s not just her vocal performances that Lucinda sweats. In talking about her creative process, she’s emphasized the role of editing. Her father, Miller Williams, was a highly regarded poet, and Lucinda learned a lot about writing from him. She has worked to develop some of her songs over decades. “Pineola,” on 1992’s Sweet Old World, is a response to the suicide of her friend, poet Frank Stanford — which occurred in 1978.

Lucinda gives proof to the canard that the brain is the sexiest organ in the body. While she has, as she has discussed, some vanity in her appearance and always taken care to look good, her appeal comes down to something beyond appearances. She has been celebrated for her combination of toughness and vulnerability. When my colleague Chester Simpson saw her at the Red Wings Roots festival, she dedicated a song to a guy “who couldn’t get it up.”

This is typically unbridled Lucinda, raw and sensual and honest. She channels that raw sensuality through wit on songs like “Hot Blood.” Though the song is about “one thing: lust,” it expresses that lust through wit and inflection. Through timing and phrasing, she proceeds to make a series of everyday actions, like “buying tomatoes for a casserole,” sound, somehow, ridiculously sexual.

Lucinda has won Grammys not just for country, for folk (Best Folk Album, Car Wheels) and rock (best vocal performance, for “Get Right with God”). Her music can be called Americana, but’s just shorthand for saying that she combines all these genres. And more. “Hot Blood” incorporates R&B influences, while still having a twang in its guitar melody. You can hear Neil Young’s distinctive mixture of heartfelt country-rock and crushing, proto-alternative riffs in many of her songs, too.

Lucinda both helped create and is perhaps the preeminent artist in Americana. The term came about to describe the work of Lucinda and others in the ’80s, including Steve Earle and John Hiatt, as well as the group Uncle Tupelo, who brought a singer-songwriter sensibility to their combination of folk, blues, and country-rock. Though there were earlier contributors to this tradition — they might include Doug Sahm and his various groups, John Prine, The Band, The Byrds (especially in their Sweetheart of the Rodeo era, as well as the work done by Gram Parsons as a solo artist and with the Flying Burrito Brothers), Creedence Clearwater Revival, and even the Grateful Dead — it’s only this work in the ’80s that really defined a new a genre of music.

While Lucinda’s fans appreciate her as a performer, she’s made her biggest mark as a songwriter. Rolling Stone ranked her 77th on their list of the best songwriters, ahead of Prine and even Kris Kristofferson. Mary Chapin Carpenter isn’t the only prominent artist to recognize the strength of Lucinda’s material. Emmylou Harris covered the title track of Sweet Old World on her standout 1995 album Wrecking Ball. Tom Petty recorded her “Changed the Locks,” and she opened for him at his final concert at the Hollywood Bowl.

Especially at this point in her career, Lucinda may not be for everyone. Her voice has changed with age, gotten lower and rougher. She’s adjusted her technique to work with what she has, but her music isn’t going to appeal to everyone. As a live performer though, she’s smart, funny, and a great storyteller.

For those of us who so deeply admire and enjoy her work, we fill that, with Lucinda, we are supporting a true artist. She’s never compromised on her vision in pursuit of a larger audience. She’s never made a music video. She’s authentic and she has integrity. She’s never lost her sense of place, her groundedness in her hometown of Lake Charles and the South. Her songs, like “Ghosts of Highway 20,” celebrate her regional roots while tapping into universal sentiments.

At her show in September, Lucinda told the audience that she’s working on a memoir. I very much look forward to it, and I expect that it will be as unflinchingly honest and beautifully poetic as its author.