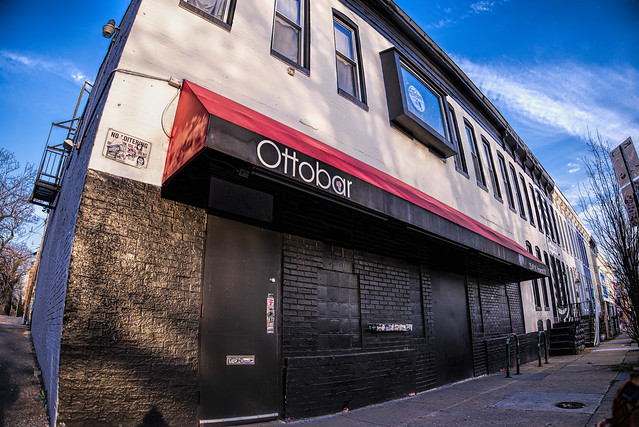 The Ottobar (Photo by David LaMason)

There have been few places that have been around in this town as long as the Ottobar.

Right after high school, there were clubs in Baltimore like the Rev, Memory Lane, and even Fletchers, but after a while they’d all eventually fade away. Fortunately opening their doors in 1997 on a little alley around the corner from Baltimore’s City Hall, there was the Ottobar. Back then, we’d get there early, head upstairs to hang out before the show, and play pool.

There were great local bands like Candy Machine, Lungfish, Liquor Bike. Then there were the bands I got to see starting off like Of Montreal and one of the most packed shows with Superchunk, where when a few started jumping up and down every one was jumping too because, well, it was like we were stuck together with sweat.

When the Ottobar moved to where the old Club Midnight used to be, things really started moving. Moving from a max capacity of about 150 or maybe 200 to the current location where its capacity has doubled, the Ottobar has now hosted over 1,000 acts, including The Black Keys, Death Cab for Cutie, Father John Misty, TV on the Radio, The Breeders, and The White Stripes.

Read our Parklife DC coverage of concerts at the Ottobar.

Last year Rolling Stone Magazine named the Ottobar one of the best live venues in America, and it’s due in large part to the staff who keep this second home to tons of live music fans.

Over a year ago there was talk that the Ottobar was in the process of being sold by the original owners and, for many of us, there was some fear that it may all disappear. But in May of last year it was reported that long-time bartender at the Ottobar, Tecla Tesnau would be taking over and would be keeping the Ottobar one of the best places to see shows in the country.

In addition to the live music, the Ottobar has bars both on the first floor and at the back of the club overlooking the dance floor. And there’s the popular second floor with games, karaoke, and a cozy bar area.

The club also hosts free monthly stand up comedy nights, and comedy specials with acts like Chris Gethard, Michael Ian Black, and Wyatt Cenac. And it has events like the long running Super Art Fight, dance parties, and a live Punk Rock Karaoke.

Find more about the Ottobar on its website, and help support the club in good times and in bad.