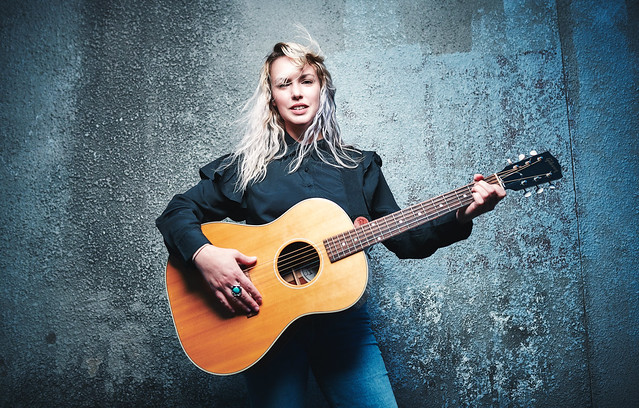 For her show, Lauren plays songs off her upcoming Wildfire EP, due out June 23. Her new song “Better Angels” was originally inspired by a Lincoln speech and has taken on new meaning to her during these terrible times. So much so, she made a video to honor her local heroes in and around her MD and DC neighborhood.

Watch the official music video for “Better Angels” by Lauren Calve on YouTube:

Lauren’s musical compositions find their ground in the sounds of blues and Americana, guitar and lap steel, but their strength lies in how they go beyond tradition into innovative melodies, structures and arrangements that define their originality. She wrote “Better Angels” after listening to a radio interview with Jon Meacham who cited Abraham Lincoln’s inaugural address as inspiration for his book, The Soul of America: The Battle For Our Better Angels.

“Meacham applied Lincoln’s message of ‘the better angels of our nature’ to the courage of the American people who dealt with the unprecedented crises of their era,’” Lauren said. “As I listened to this, immigrants were being contained, families were being separated, children were held in cages without beds, blankets, or food. Talk about a defining moment in American history and the ‘battle for our better angels.’ Lincoln’s words still held a powerful resonance, and they gave me a deep hope that I hadn’t felt in years. ‘Better Angels’ came from that surge of hope and optimism. It was a reminder that we would always rise to the occasion, no matter what.”

Once Covid-19 started spreading, Lauren began thinking about Lincoln’s message and the everyday people on the front lines in the battle against the pandemic.

“For me, they symbolize the angels that Lincoln talked about,” she said. “The qualities of our better nature — courage, leadership, resolve, resilience, empathy, compassion, and altruism are all exemplified in the nurses, doctors, janitors, grocery store clerks, mail carriers, delivery truck drivers, pharmacists, and other essential workers. They are the ‘better angels’ in the lyrics while embodying the true spirit of the song and of Lincoln’s famous words: ‘The mystic chords of memory, stretching from every battlefield and patriot grave to every living heart and hearthstone all over this broad land, will yet swell the chorus of the Union, when again touched, as surely they will be, by the better angels of our nature.’”