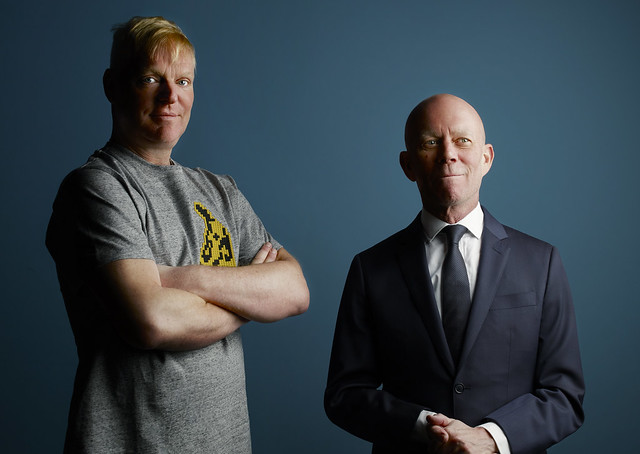 Regarding inspiration for the album, Erasure said, “The Neon offers us warmth and a brilliant brightness in its sound in our strange, silent times. It connects us to our pasts and our futures as it glistens with hope. It creates beautiful places where our imaginations can roam, bringing us together, twinkling and beaming. The Neon puts us in the real world again, now and forever, lit up and alive.”

Written and produced by Erasure, the album’s initial sessions saw Vince Clarke and Andy Bell reunited to work on the follow up to 2017’s World Be Gone with a fresh optimism and energy, in part born from their own recent personal projects.

Vince said, “Our music is always a reflection of how we’re feeling. He was in a good place spiritually, and so was I — really good places in our minds. You can hear that.”

Watch a lyric video for “Hey Now (Think I Got a Feeling)” by Erasure on YouTube:

Taking inspiration from pop music through the decades, from bands Andy loved as a child through to the present day, he explained, “It was about refreshing my love — hopefully our love — of great pop. I want kids now to hear these songs! I wanted to recharge that feeling that pop can come from anyone.”

The album’s vocals were recorded in Atlanta, Georgia, with Vince joining Andy at the studio sessions, and the mixing was done by the band in London earlier this year. Photographs were shot at that time in the unique environs of Gods Own Junkyard, a gallery housing a huge collection of vintage neon. Andy said, “I felt like it was being inside a virtual reality game. I loved that it felt like being in a different world. That’s what I want our new album to convey.”

For more music by Erasure, visit the band’s website.