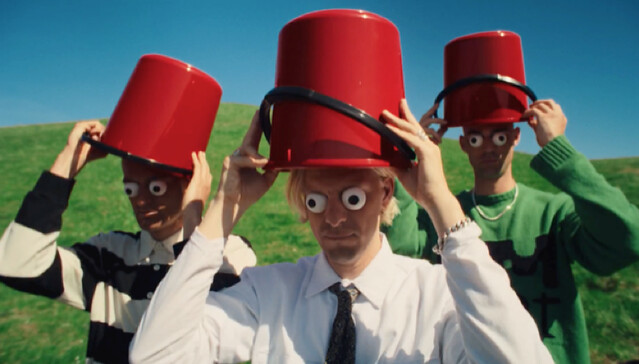 “We’ve created a place of our own where the rules of Earth don’t apply,” the band explained when talking about the making of their upcoming album, Garden, and the video for latest single “SOS.”

“The recent weeks and months of 2020 made us think about marginalized communities and people who are deprived of not having access to the simpler things in life that we all take for granted. We wanted the video for ’SOS’ to take us all to this place of simplicity and happiness,” Scarlet Pleasure said.

Filmed by Dolcerocca with creative direction from Stine Thorbøll, the video for “SOS” provides the perfect backdrop for the song’s sped-up, slow reggae sound, reminiscent of Sting and The Police.

Creative Director Stine Thorbøll (Copenhagen Records) said of the video concept, “The ‘Scarlet Pleasure Garden’ is located on its own planet; the rules of Earth don’t apply. The grass is always green, the sun is always shining. The robot vacuum cleaner is your only friend and the routers need water in order to grow. The garden consists of strictly kept boxwood and wavy golf courses alá Teletubbies. A very obvious human attempt to control nature. We really liked the idea of having high energy band performances in that setting.”

Additionally, the main inspiration of the video is “high production music videos from the late ’90s and the early ’00s,” Stine said. “Both on the overall look of the video and the comical twists. We wanted the band to have a lot of different props to interact with to make the video playful and weird.”

Watch the official music video for “SOS” by Scarlet Pleasure on YouTube:

With a subtle touch of the Charles Aznavour classic, La Boheme, mixed with Scarlet Pleasure’s irresistible youthfulness, “SOS” pairs perfectly with a fruity Summer-cocktail. Within three weeks of its release, the song hit the top five on the Danish Airplay Chart.

Comprised of Emil Goll (vox/guitar), Alexander Malone (bass), and Joachim Dencker (drums), Scarlet Pleasure has created a unique position for themselves by combining a distinct visual profile with their ability to constantly invent new tendencies. Since their 2014 debut single, “Windy,” the band has released a constant string of hit singles, gained more than 200 million streams on Spotify, influenced several fashion trends among the Danish youth and headlined the legendary Orange Stage at Roskilde Festival.

The first chapter of Garden — named in part for Scarlet Pleasure’s dedication to living green and protecting the planet from climate change — officially drops on June 19. Their “Garden” will continue to be nurtured and grow, as they’ll add new songs throughout the fall.

First drop of new album, Garden, is set for release on June 19, 2020, on Copenhagen Records.

One thought on “Song of the Day: “SOS” by Scarlet Pleasure”