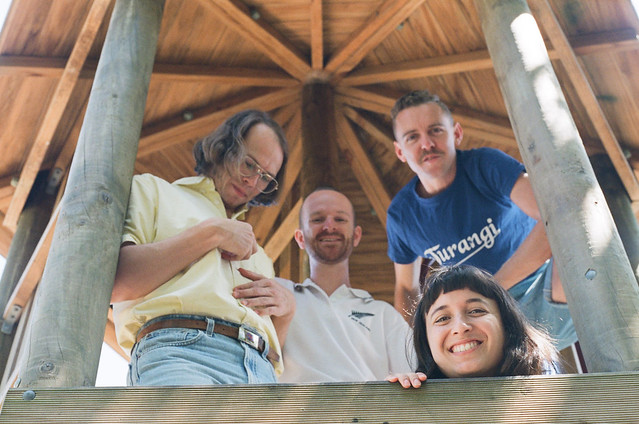 The Beths (Photo by Mason Fairey)

The Beths share “Out of Sight,” a new single from their upcoming sophomore album, Jump Rope Gazers, out July 10 on Carpark Records. It follows previously released singles “I’m Not Getting Excited” and “Dying to Believe.”

“Out of Sight” is tender and shoegazing. It reckons with the distance that drives people apart and how those who love each other inevitably fail each other. The best way to repair that failure, in The Beths’ view, is with abundant and unconditional love, no matter how far it has to travel.

Frontwoman Elizabeth Stokes said, “The band playing on ‘Out Of Sight’ is more fragile than we usually allow ourselves to be. We are trying to listen more deeply and be more open ended, it was confronting to do and sometimes even frustrating. But it came out great, Ben’s bass playing especially is beautifully melodic and gives the song a unique texture.”

The accompanying video directed by Ezra Simons was filmed on Super 8 film and shows the band birdwatching amongst the brush. Archival footage of birds native to New Zealand are woven throughout. Ezra said, “The goal was to create a nostalgic and timeless roadtrip video where the band goes off in search of native birds, but instead finds each other.”

Watch the official music video for “Out of Sight” by The Beths on YouTube:

The Beths are Elizabeth (vocals/guitar), Jonathan Pearce (guitar), Benjamin Sinclair (bass), and Tristan Deck (drums). Jump Rope Gazers is the follow-up to Future Me Hates Me, “one of the most impressive indie-rock debuts of the year” (Pitchfork). The album received glowing praise and appeared on many year-end lists including Rolling Stone, NPR, Stereogum, and more.

For more music by The Beths, visit the band’s website.