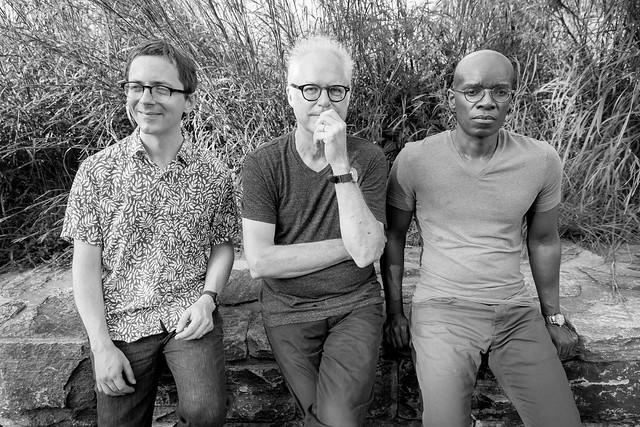 Bill has also released the album’s closing track “We Shall Overcome,” the Civil Rights anthem that he holds dear as a message of hope in all dark times. “I’ve been playing the song for years, and I’m going to keep playing it till there is no need anymore,” he said. “I can’t help but hope that day will come.”

Produced by his longtime collaborator Lee Townsend and recorded by Tucker Martine at Flora Recording in Portland, Oregon, Valentine is a wide-ranging 13-song set that mixes Frisell originals new and old, jazz standards, traditional songs, and covers. The album explores the creative freedom of the trio format and the profound relationship that exists between these three musicians after years of touring.

“This album is all about Rudy and Thomas and the musical relationship I have with them,” Bill said. “We’ve played a lot for a number of years, but there was no evidence of it, so I really wanted to have a document of it, if only to show that it’s real and not this magical thing that I’ve imagined in my fantasies.”

Watch the official music video for “We Shall Overcome” by Bill Frisell on YouTube:

In the album’s liner notes, author David Hajdu writes that Valentine “is not only a gem-cut specimen of the trio art, but a vivid demonstration of the capacity of masters like Frisell, in the manner of Ellington, to push themselves, their collaborators, and their audiences to unexpected heights through the ever-restless force of their creativity.”

Townsend, who has produced the great majority of Frisell’s albums over the past 30 years, observes that “All three of these musicians have a deep sense of structure along with their exploratory approach to making music, so they can elaborate but never move too far away from what they need to do to serve the song. This trio is a sterling example of balancing that architectural sensibility with the spirit of spontaneity at the same time.”

“There’s the physical mathematics of a trio. There is so much strength in it — it can lean to one side, but it will still stay up,” Bill said. “The music is about everyone trusting each other to the point where everybody’s in the state of mind where you don’t know what’s going to happen next, and you feel safe enough to try anything. It’s like when you’re dreaming and you’re on the edge of a cliff, and you know on a certain level that it’s a dream, so you can just jump off. With this music, we could do that. All three of us could take big chances, and we’d always be rescued. It’s about the trust that makes risks possible.”